The following text is Part 2 of a report on the Fort Dix Stockade rebellion of June 5, 1969 (Part 1 was published in WW on June 2, tinyurl.com/y2amhjs3). The stockade prisoners, many of them opponents in some way of the U.S. war against Vietnam, rose up in response to the provocations of the stockade authorities and burned down part of the stockade. The Army sent in 250 military police, who beat the prisoners and arrested 38 of the rebellious soldiers, finally charging them with serious crimes that could lead  to decades in military prison.

The following report is adapted from a chapter in John Catalinotto’s book, “Turn the Guns Around: Mutinies, Soldier Revolts and Revolutions” (World View Forum, 2017), which tells the story of the American Servicemen’s Union, an anti-war, anti-racist organization of U.S. active-duty service members during 1968-75. ASU members faced some of the heaviest charges at Fort Dix.

In the aftermath of the rebellion that burned down part of the stockade, 38 of the troops imprisoned there faced heavy charges, with a key ASU organizer, Terry Klug, facing more than 50 years in prison. In the summer of 1969, the popular mood in the country was turning decisively against the war in Vietnam. This was a key development in the movement to free the Fort Dix 38.

Could the supporters of these revolutionary anti-war troops build a movement that was both broad and militant and do it in time to keep them from being imprisoned?

During the summer of 1969, the ASU, the Fort Dix anti-war coffeehouse — part of a national movement that supported anti-war troops — Students for a Democratic Society, Youth Against War & Fascism, the Rainbow Coalition and the Committee to Free the Ft. Dix 38 all began to start organizing for a mass demonstration on Oct. 12 at Fort Dix. The Rainbow Coalition then included the Black Panther Party and the Young Lords (a recently founded Puerto Rican organization) and other organizations that had mainly white membership.

Then something happened that gave this demonstration a special direction. The movement for women’s liberation had been developing in the population as a whole, along with the overall rebellious sentiments of 1968 and 1969, led by the Black Liberation Movement. The drive for women’s liberation was even more intense among women in the anti-war and other movements, women who considered themselves revolutionaries, than it was in the general population.

With the military 98 percent men, it was hard for women to play a leading role within the ASU or similar organizations. On the other hand, there was nothing stopping women from leading the demonstration of civilians at Fort Dix — except tradition. The women working with the ASU, especially if they were in Workers World Party — who at that time included Sue Davis, Laurie Fierstein and Maryann Weissman — were quite ready to break tradition’s chains. 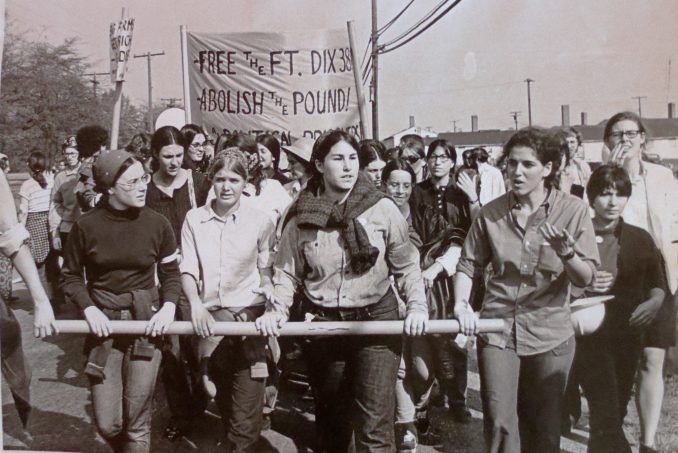 In an article in the Oct. 23, 1969, issue of Workers World, Naomi Goldstein wrote this account of the demonstration:

“Three hundred determined women showed that they could give both tactical and political leadership to a mass march. We broke out of our prescribed roles as passive supporters on demonstrations and took the lead, while the men marched behind us, some accepting our leadership reluctantly.

“The idea for a women’s brigade had been brought up at a planning meeting for the demonstration by Maryann Weissman, National Coordinator of Youth Against War & Fascism, who pointed out that in Vietnam, NLF [National Liberation Front] women are leaders in the struggle for liberation.

“The idea was enthusiastically supported by women from SDS, MDS [Movement for a Democratic Society] and various women’s liberation groups. What began as a tactical move, to confront the GIs with their own male chauvinism, developed into a well-organized effort by a women’s caucus to give the most militant and effective leadership possible to the Fort Dix demonstration.”

Just as on the first day of the Paris Commune and the first day of the February Revolution in 1917 Russia (both histories are included in “Turn the Guns Around”), at the Fort Dix protest women also led the way. In the earlier examples, the interaction between the rebellious women and the potentially rebellious troops played a key role in sparking revolution. In 1969 the drive to organize the troops in a union had a similar goal, even if it failed to reach that intense level.

“The marchers moved forward eight abreast and the line stretched back as far as you could see. It was Oct. 12, 70 miles south of New York City at Fort Dix, N.J. There were maybe 10,000 people, men and women.

“They marched past the gas stations, houses and hamburger stands of Wrightstown toward Fort Dix, chanting in an angry roar their demands for freeing jailed GIs and ending the war.

“It was a people’s army — as yet unarmed. Banners carried by the American Servicemen’s Union stood out in a forward section. Marching with the ASU contingent were ASU leaders, ex-GIs and active duty GIs on leave or AWOL.

“But leading the huge march were young women. Women determined to show the world that they were in the front of the battle to free their brothers from the military dictatorship. …

“Then the Brass sent hundreds of MPs running across the field with clubs, bayonets and gas masks to intercept the marchers.

“But the marchers continued to advance defiantly until they were face to face with the lines of MPs. Then the two forces stood still, holding their ground as the young men and women appealed to the MPs to act as GI brothers and not as cops. But these were for the most part special MP pigs flown in from Fort Meade, Md.

“The Brass had feared to use Dix GIs as MPs because of their great sympathy with the marchers. …

“An order was given [by a colonel].

“MPs carrying special gassing guns opened up and a cloud of tear gas enveloped a large section of the demonstrators.

“The marchers put on plastic gas masks and retreated slowly, prodded by the now advancing MPs, to the roadway. At first there was confusion; then the march reassembled and continued with the Brass sending MPs to stand in a solid line along the road which forms the perimeter of the base, barring any further entry by the marchers.

“But the marchers continued to express their demands and continued to appeal to these MPs to act as GI brothers, not as pigs for the Brass.

Wave of anti-war struggle in fall 1969

The protest at Fort Dix was part of a wave of anti-war demonstrations in the fall of 1969. On Oct. 15, an action called The Moratorium was held in cities all over the country. No longer isolated in New York, Washington and San Francisco, the movement was reaching the interior. More than a million people around the country walked away from their workplaces, mostly during lunch hour or before closing time, wearing black armbands to show their opposition to the war in Vietnam.

A month later, on Nov. 15, in Washington, D.C., between a quarter million and a half million people gathered for what was the largest single action against the war up to that time. Within that massive crowd, there was a more revolutionary contingent of maybe 10,000 mainly young people, who left the main group to surround the Justice Department, where, according to later reports, they terrified Attorney General John Mitchell.

Judging by how they treated most of the Fort Dix 38, the Army knew it was facing trouble if it came down too hard on the soldiers. But they still could single out those they suspected of being leaders. The struggle to free the GIs had to continue both by organizing their legal defense and with actions supporting them.

The Workers Defense League and the National Emergency Civil Liberties Committee handled most of the cases. Even before the demonstration, 26 of the defendants had received special courts-martial, with 22 acquitted. The other four received sentences between four and six months. Three of the defendants somehow escaped and disappeared.

Five of the soldiers most closely associated with the ASU faced general courts-martial with potentially much heavier charges. Their sentences had little to do with actual proof of guilt. Jeff Russell was found guilty of rioting and received a sentence of three years in prison. Tom Catlow was found guilty, but was sentenced only to an undesirable discharge. William Brakefield got three years at hard labor and Carlos Rodriguez Torres two years.

In Klug’s case, the prosecution strategy depended on frightening the defendants with very heavy charges and getting them to give testimony against each other as the way to reduce the charges. The prosecution would lie, saying, “So and so ratted you out already. Why should you take the whole rap? Give evidence against him.”

As one witness testified, the prosecutors kept hounding him to give evidence against Klug. They targeted Klug because of his history as a political organizer, his conviction for desertion and his role in the ASU. Sometimes these prosecution tricks work. In this case, however, the solidarity of the GIs remained strong. Besides, no one in the stockade wanted to be known as a rat.

On Dec. 8, 1969, five of the GIs who had given depositions against Klug under pressure from the guards and officers testified. Under oath they all repudiated their earlier statements.

The court-martial board acquitted Klug on all charges. His statement called attention to the recent exposure of massacres of villages in Vietnam and condemned the murder four days earlier of Black Panther Party leader Fred Hampton in Chicago.

Klug added, “My acquittal was due to the solidarity of the men, the offensive legal defense put up by my counsel, Henry di Suvero, and the political struggle waged by the anti-war movement.” (The Bond, Dec. 16, 1969)  Klug still had more than a year in prison to serve for his earlier conviction for desertion.

This struggle had its casualties, but the anti-war movement and the ASU came out stronger than before the Fort Dix stockade rebellion.