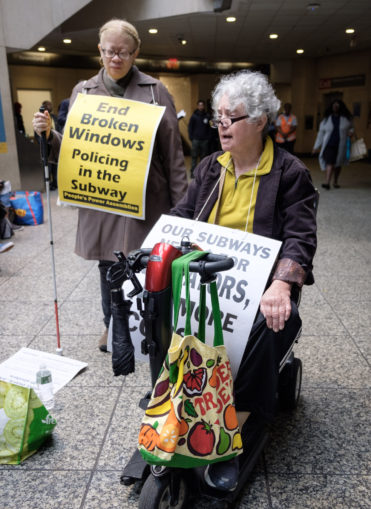 On Oct. 3, leaders in the disability rights movement led the latest in a growing movement of underground subway actions against the MTA’s racist police crackdown on “farebeaters.”

The main demand was that money be spent making subways accessible with elevators and ramps — rather than on surveillance cameras and ever-increasing police presence, which all statistics show focus disproportionately on Black and Brown riders.

Carrying placards that read, “Our Subways Need $ for Elevators, Not More Cops” and “End Broken Windows Policing in the Subway,” activists made it clear who the real farebeaters are: Wall Street firms draining billions from the MTA.

“The MTA spends billions in debt service to the banks,” said Mary Kaessinger, a disability rights leader and wheelchair user, as activists passed out leaflets to commuters, “and they don’t provide good train service to the people of this city.”

The MTA has recently cut service on at least eleven bus lines, including Brooklyn’s busiest line — NYC’s second busiest — and is planning to cut 2,700 transit worker jobs. It has also removed printed schedules from bus stops, requiring riders to use smartphones — which not everyone can afford or is able to use.

At the same time, the MTA announced it was flooding the subway with 1,000 more cops and outfitting stations with surveillance cameras.

Terrea Mitchell, an African-American leader with the PPA/NYC who is sight-impaired, did not mince words when cops approached the Barclay’s Center protesters.

“We don’t need more cops; we need accessibility,” she told them.

Even before this year’s increase in police, the predatory and racist nature of subway policing gave rise to the Swipe It Forward campaign. It was started by groups like the Bronx’s Why Accountability to combat the oppressive practice of cops targeting Black and Brown riders who can’t afford the fare.

This people’s campaign pushed back, getting the city’s district attorney to say in 2017 that arrests of fare evaders would be cut back. However, in Fall 2018 the MTA began a countercampaign, claiming it was losing $260 million a year from turnstile jumpers.

‘The subway should be free’

But what about the MTA payment of at least $3 billion a year to Wall Street banks for debt service? That’s tax-free money that rich firms rake in for doing literally nothing, while “fare evaders” are just poor and working people stretched to their financial limit.

Adopting a pleading tone, the MTA’s anti-fare-evasion campaign has included thousands of subway ads imploring the riding public not to jump turnstiles, but supporting the message with the threat of repression.

Repression breeds resistance. The ads have been widely mocked, many plastered over with stickers blasting the MTA for blaming the poor.

One sticker reads, “The MTA Hates Poor People #SwipeItForward.” Another mimicked the MTA ads, but read: “See someone evading the fare? Maybe they don’t have $2.75. Maybe they were laid off. Maybe the ticket machines are broken.” Alluding to the Swipe It Forward campaign, the bottom of the faux ad reads, “Don’t snitch. Swipe.”

Members of the People’s Power Assembly/NYC have been holding dynamic actions on the trains, going from car to car with placards — “Poverty Is Not A Crime, The Subway Should be Free” — and leaflets: “The MTA pays $7 million A DAY to Wall Street for loans taken out 100 years ago, while people are struggling to pay rent, their medical bills, their student loans and the $2.75 fare that is continuously rising.”

The Barclays Center action combined righteous anti-racist sentiment with the demand for accessibility. This demand has been part of a campaign targeting the MTA which includes protests, a constant presence by wheelchair users at MTA board meetings, and a slew of lawsuits the MTA is spending millions fighting in court.

The campaign has yielded results. Recently the MTA announced the creation of new elevators in 70 stations. This was a significant concession and a huge advance in the fight for true transit accessibility. Yet it lacked what many in the disability rights movement have been demanding: the MTA signing a legally binding commitment to create accessible stations.

Without that, the MTA accessibility announcement could end up being another unfunded promise. The Oct. 7 cover of a free daily New York newspaper stated simply, “Experts concerned about how the MTA will pay its bills.”

Uniting the many sectors of our class who face oppression in the city’s public transportation system is the best chance of forcing the MTA to do the right thing.