The Fair Pay to Play Act was signed into law by California Gov.  Gavin Newsome on Sept. 30. Newsome signed the SB206 on “The Uninterrupted,” a multimedia platform show hosted and produced by LeBron James, the superstar forward with the National Basketball Association’s storied franchise, the Los Angeles Lakers. This law will not go into effect until January 2023.

What is FPtoP?  First of all, the name is a misnomer because the bill has nothing to do with schools paying student-athletes a fair wage like other workers for their labor. 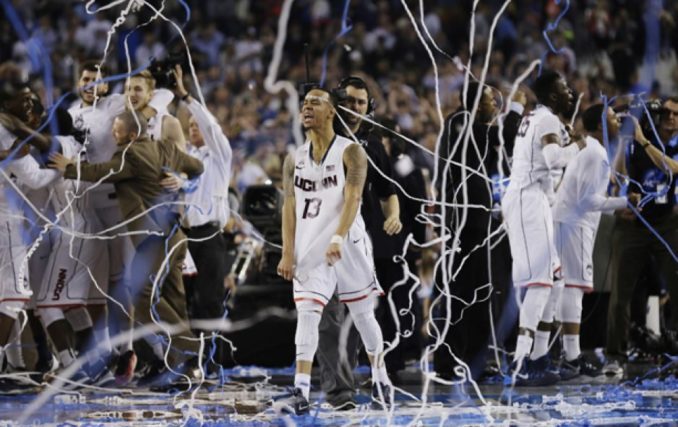 Before Shabazz Napier, wearing number 13, played for and won the 2014 NCAA championship for the University of Connecticut, he said: ”There’s hungry nights where I’m not able to eat,” because his limited food stipend did not give him enough money for food.

Instead, according to espn.com, this bill “makes it illegal for schools to prevent an athlete from earning money by selling the rights to his or her name, image or likeness to outside bidders.” (Sept. 30) The bill gives student-athletes the right, if they wish, to hire agents to represent them to be compensated if approached by big name corporations like Nike or smaller vendors.

All California athletes — identified as male, female and gender nonconforming — will be covered. But overwhelmingly those who have the most to gain will be athletes who play football and basketball.  These two sports alone bring millions of dollars, along with prestige, into the coffers of athletic programs and school endowments on an annual basis.

Many universities have multibillion-dollar endowments, larger than the economies of developing countries, and can afford to pay their athletic coaches millions of dollars. Salaries of the top ten National Collegiate Athletic Association coaches in 2019 ranged from $6.2 million to $8.9 million a year, according to thebestschools.org website.

These colleges and universities, whether Division I, II or III, operate under the auspices of the NCAA, a nonprofit organization of over 1,110 schools that connects sports to academics.

Though the NCAA may pay for a player’s scholarship — tuition, room and board, and a stipend from semester to semester — this is far from being a paycheck.

The main opposition spokesperson against SB206 has been NCAA President Mark Emmert, whose own salary and compensation came close to $4 million in 2017.  He believes SB206 will blur the lines between amateur and professional sports on a wider scale.  In other words, the NCAA hierarchy fears that athletes being compensated will make “amateur” sports and the NCAA obsolete if it leads to a similar federal law.

NCAA is a ‘dictatorship’

Consider the fact that the NCAA brought in more than $1 billion during the 2016-17 season. Three-fourths came from contracts with TV and livestreaming the annual March Madness men’s national basketball tournament. Arenas that play host to regional games, the Final Four and the national championship game during the tournament become standing-room-only due to the players’ skills and talent, and nothing else.

The NCAA also brings in tens of millions of dollars for end-of-the year college football games like the Rose Bowl, Orange Bowl and Sugar Bowl.

Draymond Green, a three-time champion with the Golden State Warriors and a former star player for the Michigan State Spartans, stated at a press conference that the NCAA is a “dictatorship.” (nba.nbcsports.com, Oct. 4)

When asked to comment on the FPtP bill, Green said, “As a former college athlete, that’s exciting. You spend so much time in college broke, with no money, and yet everybody else was living very well.

Green’s comments expressed the sentiments of many other former college athletes whose universities profited off their popularity.  Basketball icon LeBron James has stated that one reason he decided to forego college and go directly into the NBA from high school was fear of being super-exploited. This even though he was the most sought-after recruit in the U.S. when he was drafted at age 17.

It is no coincidence that the athletes most affected by this super-exploitation are African American, many of whom hope that college will be a bridge from a life of poverty to being drafted into either the NBA or the National Football League, where the potential of earning millions of dollars awaits.  The truth is that only a very small percentage of athletes are lucky enough to make it to the pros, coming out of either high school or college.

That is why the long-term struggle of advancing from a bill like FPtP to legal recognition of student-athletes as workers is inevitable.  Back in 2014, Northwestern University football players filed a petition before the National Labor Relations Board asking for the right to unionize with the same rights as university employees, including the right to collectively bargain.

The players had the backing of the College Athletes Players Association, a United Steelworkers-supported organization that sought to represent them as workers. In essence, these players were allying themselves with low-wage university workers such as graduate student assistants and student janitors.

However, the NLRB struck down their petition in August 2015, siding with the NCAA and university administrations, which want to keep athletes powerless, with no living wage and no real protection in terms of their safety on the field or the court, where devastating injuries can and do occur. Instead, the NCAA tried to appease these players and others by providing a few more crumbs like increased funding for scholarships, food stipends and health care.

The FPtoP bill may have legal limitations, but it will be remembered for helping to launch a much larger struggle for student-athletes and their allies to fight for their rightful place as workers within the global working class.