Oct. 4 — Today, on the one-month anniversary of the Battery Wharf Hotel strike, hundreds of supporters joined the picket line.  Even before the rally start time of 4:30 p.m., 100 people were there. The spirit of solidarity was electrifying as students, unions and community organizations soon began arriving to swell the line by four to five times. 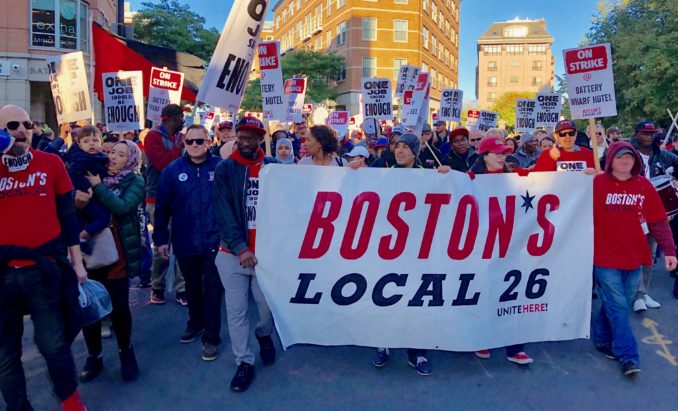 Hundreds take to the streets of Boston Oct. 4 in solidarity with hotel strikers; labor/community contingents and singer Billy Bragg join the rank and file.

The Battery Wharf strikers, mostly migrants, are represented by UNITE HERE Local 26. They are fighting for affordable health care, job security, a pension and a yearly wage increase. They are also fighting against racism in the hotel industry, demanding steps be taken to diversify the workforce and hire more African-American workers. The hotel owners, Westmont Hospitality Group, have refused to negotiate.

The 75 strikers want what their comrades at Marriott hotels won in 2018 when they struck nationwide. In Boston seven hotels were virtually shut down for 46 days. The Marriott victory set a precedent for workers’ rights with contract language guaranteeing paid parental leave, accomodations for pregnant workers and an alert system for housekeepers in case of sexual assault.  Workers also won a crucial guarantee that immigrants who lose their protected status will have their jobs waiting for them if they regain the right to work within five years.

The majority of hotels in the Boston area were forced to match the benefits won as a result of the historic Marriott victory.  But Battery Wharf owners have refused.

At today’s rally, as a busload of chanting nurses represented by the Massachusetts Nurses Association pulled up, they were greeted with cheers. Later, the boisterous picket line took to the narrow streets of the North End, marching to a final rally where Billy Bragg, English musician and labor activist, sang union songs.