Jorge Arreaza, minister of foreign affairs of the Bolivarian Republic of Venezuela, was greeted with cheers and applause on Sept. 26 as he entered Holyrood Episcopal Church/Iglesia Santa Cruz in the Washington Heights neighborhood of Manhattan. Arreaza spoke at the invitation of the church’s Ministry of Solidarity with the Peoples. The occasion was a welcoming meeting in solidarity with the Venezuelan delegation to the United Nations General Assembly. 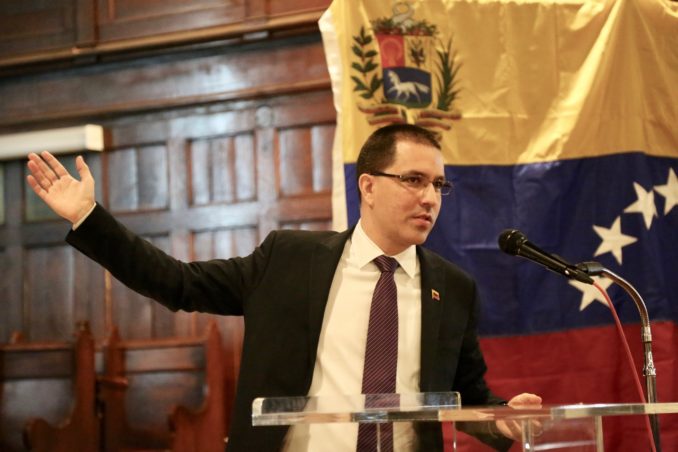 The event was organized by a broad coalition of anti-war and anti-imperialist organizations to show support for Venezuela as it faces deadly U.S. sanctions and the threat of military intervention. Arreaza described the history of U.S. intervention in Latin America and the coups it has backed.

The United States is now trying to get other countries to invade Venezuela after the recent activation of the Inter-American Treaty of Reciprocal Assistance (TIAR), also known as the Rio Treaty, by the Organization of American States. A 1947 agreement among many countries of the Americas, including the U.S., the treaty states that an attack against one member is to be considered an attack against all. But it is the U.S. that is attacking Venezuela! Venezuela hasn’t attacked any nation.

He noted that Venezuela is a country full of many riches, including gold, petroleum and other minerals. While it has been oppressed by Britain, Spain and the U.S., “We are going to be completely independent,” Arreaza affirmed.

He noted that Cuba, Nicaragua, Bolivia and Venezuela are resisting U.S. economic war, defending their sovereignty and the freedom of the Latin American and Caribbean region.

Gail Walker of IFCO/Pastors for Peace, who chaired the meeting, said the Bolivarian Republic is now under the same kind of attack that Cuba has faced. “As we have stood in solidarity with Cuba, we stand in solidarity with Venezuela,” she stated to applause.

Father Luis Barrios, pastor of Holyrood Church/Iglesia Santa Cruz, gave a warm welcome to the crowd, declaring “La lucha sigue” — the struggle continues. Roger Wareham of the December 12 Movement, who introduced Arreaza, connected the situation in Venezuela to that in Zimbabwe and other countries facing U.S. sanctions.