The Sugar Land 95 are the 95 unnamed African-American people buried in unmarked graves in the city of that name, 30 miles south of Houston. The people were buried on property sold to the Fort Bend Independent School District (FBISD) by the Texas prison system. The graves were unearthed during the summer of 2018 as construction workers were building a school. (See “Sugarland: A Crime Against Humanity,” WW, Sept. 10, 2018.) 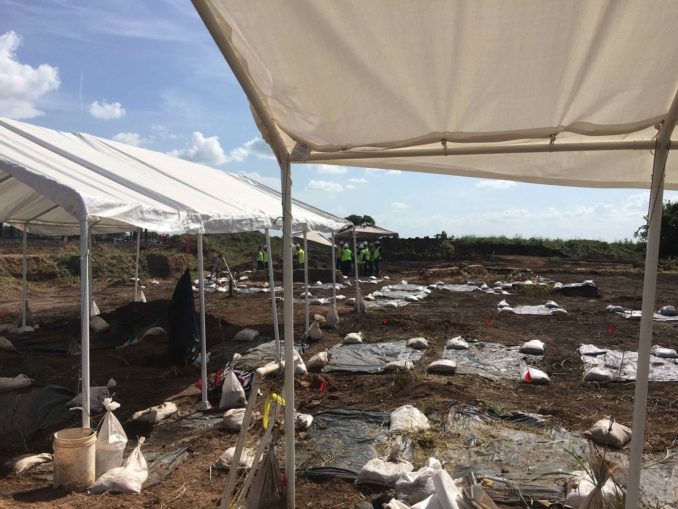 The graves of the Sugar Land 95. (Credit: FBISD)

On Sept. 23, the Houston Chapter of the National Black United Front, along with community members, activists, scholars and allies gathered at Fort Bend’s school board meeting to call attention to the ongoing, unjust treatment of the Sugar Land 95. The NBUF has been involved in the struggle to bring justice to the Sugar Land 95 since 2005.

Around the time of the Emancipation Proclamation in 1863, Sugar Land and surrounding areas were called “The Hell Hole on the Brazos” due to the inhumane conditions for enslaved Black people working on plantations. After Emancipation, convict leasing was put in place, a system designed to keep freed Black people in “legal” slavery. This was sanctioned through a clause that still exists in the 13th Amendment to the U.S. Constitution.

Under this system, the Texas Department of Corrections hired out prisoners — who were often Black and arrested by law enforcement for very little or no reason — to plantation owners as laborers. Convict leasing could be even worse than slavery because those exploiting the labor of the leased people had no economic stake whatsover in their well-being, even in keeping them alive.

According to historian Robert Perkinson in “Texas Tough: The Rise of America’s Prison Empire,” more than 3,500 leased prisoners died in Texas between 1866 and 1912. Perkinson calculated there were more deaths under convict leasing than lynchings in that period.

Activist and historian Reginald Moore found a report in 2001 that FBISD planned to build a new school at the location where there had previously been a convict camp. As early as 2003, Moore began warning FBISD there were bodies at that site,  likely those of prisoners forced into virtual slave labor.

The FBISD persisted despite many warnings. When construction began on the James Reese Career and Technical Center, the bodies were discovered and unearthed. Now the remains of the 95 are still in cardboard boxes at the construction site, according to FBISD attorney Robert Scamardo.

At the school board meeting, Kofi Taharka of the NBUF listed the ways the school board had failed to do right by the 95 — before being escorted out by police for going over his allotted three minutes of speaking time.

Taharka stated: “We come before you not to appeal to your moral, political or legal conscience. For you have proven through your actions, relative to the Sugarland 95, that you have none.” He went on to list ways in which FBISD had failed: not listening to Reginald Moore’s warnings, not conducting proper surveys before construction, fighting legal oversight and failing to enlist culturally competent help. He noted FBISD had disparaged the communal descendants of the dead with insulting comments and by including them only in surface discussions without allowing real input. Before being “escorted” out, Taharka called on Superintendent Charles Dupre to resign.

Taharka and several other speakers called on FBISD to test the bodies for DNA to link them to their descendants before the reinterment process. Community activist Swatara Olushola said, “For a district to feel comfortable with making end-all-be-all decisions regarding these victims of crimes against humanity without the community, without their families, without their names, against the wishes of the court, is disgusting to me. You should be ashamed of yourselves.”

Another speaker, Salvador Herrera, began: “I’m actually here about [conditions at] James Reese Career and Technical Center, not about the Sugar Land 95, though I stand in solidarity with their efforts.” He went on to bring to light FBISD’s outrageous wage violations. Workers building the technical center had proof of wage theft and brought that to the Design and Construction Division, which is in charge of constructing buildings on city property. The workers were told they had “insufficient evidence.” Herrera called out FBISD for their unjust practices and asked how they would go about doing right by their construction workers in the future.

FBISD has continually and incorrectly insisted their intentions and actions are grounded in seeking dignity and respect for the 95. The school district’s track record speaks otherwise.

Reginald Moore reminded everyone at the meeting: “[The Sugar Land 95 are] being treated today in death the way they were treated when they were alive.” Despite all that was brought up in the heated meeting, FBISD voted to pay a funeral home $284,375 to re-inter the 95 bodies without any DNA testing or input from descendants. But the fight to do right by the Sugar Land 95 is far from over.