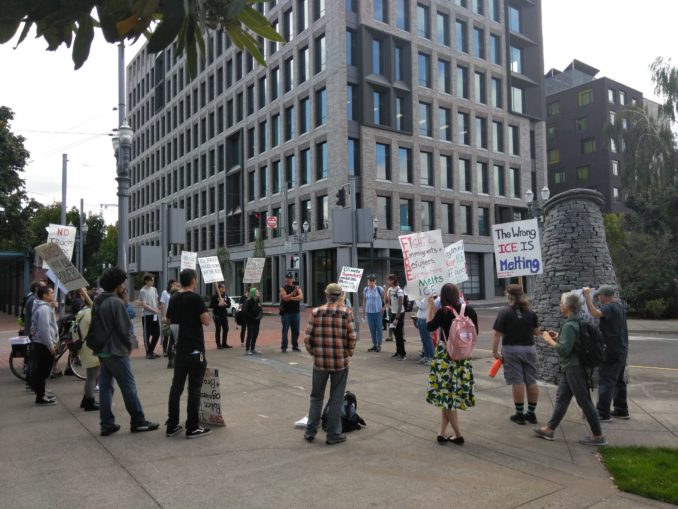 Portland picket of Greyhound demands an end to collusion with ICE and CBP.

The Portland branch of Workers World Party organized a protest Sept. 21 against Greyhound’s collaboration with Immigration and Customs Enforcement and Customs and Border Patrol. A crowd of several dozen people gathered on a corner in the city’s downtown, near Greyhound’s recently closed terminal and Amtrak’s Portland Union Station.

Activists and organizers from several groups, including Freedom Road Socialist Organization, the Portland Central America Solidarity Committee, the International League of People’s Struggles and Hands Off Venezuela PDX endorsed the event and turned out in support. Speakers denounced Greyhound’s complicity in the racist war on im/migrants and called for the closure of im/migrant concentration camps.

The lively crowd chanted and marched to Greyhound’s ticket office, handing a letter to those inside. The letter reiterated that the Amalgamated Transit Union Local 1700, which represents Greyhound drivers, mechanics, terminal workers and other employees, has denounced ICE’s targeting of bus riders. After the march, participants discussed ways to continue the struggle against ICE and the war on im/migrants.