The historic Kerr Community Center in Bastrop, Texas, was filled to the rafters on Sept. 21 as chants of “Free Rodney Reed!” echoed off the walls. Family, supporters, activists, preachers, attorneys and death row exonerees all spoke to the standing-room-only crowd about the science and the evidence that has proved  Rodney Reed did not commit the murder for which he was sent to death row in 1998.

Nation of Islam Minister Robert L. Muhammad of Austin declared: “For over 20 years the Reed family has been asking for the truth to be heard. Test the DNA, find the truth and bring it out. We woke up today in a country, a state, a city where the history of injustice is written in blood. Whether it’s what happened to the Chinese when they were brought here, or the Africans when they were brought here, or the Indigenous people who were already here, or poor white people–we know and understand what injustice looks like. Now, we are demanding justice!” 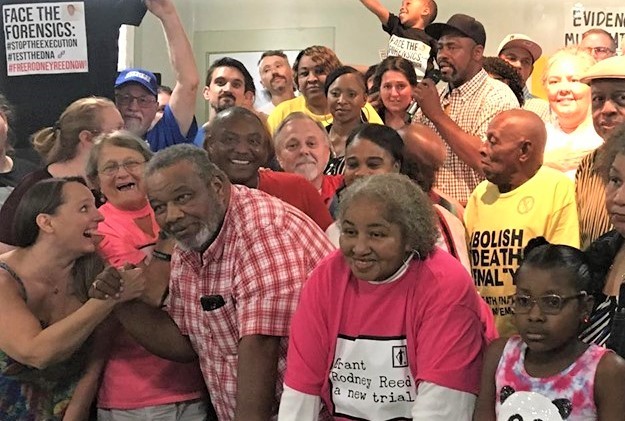 Reed, who is African American, was accused of murdering a young white woman he was having a relationship with, Stacey Stites. She was also engaged to a cop, Jimmy Fennell, who had said publicly that if Stites ever cheated on him he would strangle her with a belt. That is precisely how Stites was murdered. The same year Reed was convicted of Stites’ death, Fennell pleaded guilty to raping a woman in his custody as a police officer, for which he spent ten years in prison.

Now the Bastrop County District Attorney has given Reed a Nov. 20 execution date — set just one day after the local newspaper ran a story about the Reed family protesting at the U.S. Supreme Court in Washington. This apparent retaliation angered Reed’s Innocence Project attorneys. They have filed a federal civil rights suit against the state of Texas because DNA testing has been repeatedly denied.

“We know DNA testing can secure evidence of innocence to support Reed’s claim, and the denial of such testing violates his constitutional rights,” said Bryce Benet, one of Reed’s attorneys.

At the Sept. 21 rally three death row exonerees spoke from Witness To Innocence, an organization composed of and led by death row survivors and family members. “I have no doubt in my mind that Rodney is innocent!” said Gary Drinkard, who spent almost six years on Alabama’s death row before exoneration in 2001. Also speaking were Albert Burrell, who did 13 years at the infamous Angola State Penitentiary in Louisiana, and Ron Keine who was on death row in New Mexico for three years for a crime that a cop finally admitted to having committed. 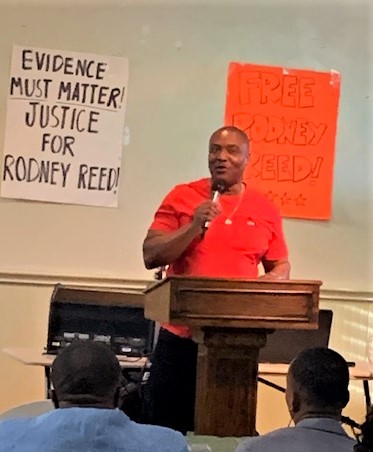 A system ‘working just as designed’

During the two-hour rally, the audience hung on every word. From the children to the elders, emotions ranged from anger to inspiration to horror to commitment to love. Each talk educated the crowd that the criminal justice system has nothing to do with justice. The racism the system is based on affects everyone.

The highlighted guest of the evening was Texas exoneree Anthony Graves, who was freed in 2010. He reminded the audience that awaiting execution doesn’t just affect the people on the row: “Let’s talk about my mom. She was on Death Row with me for 18 ½ years and two execution dates. I watched as over 400 men went to their deaths, and some of them were innocent.

Graves said to loud applause: “People talk about fixing a broken system, but it’s not broke. It’s working just as it was designed to work. But this system has never worked for us. Let’s talk about throwing the whole system out and creating one fair system that works for all of us.”

This past summer, Reed’s family began the Reed Justice Initiative, designed to spread information about the case, pressure public officials to recognize the frame-up of Reed and stop his execution. The initiative has rallied at the Texas Capitol, protested outside the governor’s mansion, demonstrated every day for a week at the DA’s office, and issued press statements on each of the three Texas executions in August and September. Noted activist and author of  “Dead Man Walking,” Sister Helen Prejean, has taken up Reed’s case. There will be protests at the governor’s mansion daily from Sept. 30 through Oct. 4.

Reed’s mother, Sandra Reed, ended the evening by telling everyone present that she loved them and thanked them for their activism and support: “Our family has grown throughout the decades we’ve been fighting for my son because all of you are now our family.”

And Rodrick Reed, one of Reed’s five brothers, promised: “We are going to work every single day to free my brother. We only have 60 days left to stop his execution and we’re not stopping to rest.”