The chants rang out loud and clear all weekend: “El Paso!” Then: “Firme!”

After the racist mass murders on Aug. 3, when a gunman killed 22 people and wounded 24 more, El Paso activists issued a call to action against white supremacy. This was followed by a weekend of actions to organize and educate people around the world about this important fact: What happened in Walmart wasn’t just a lone racist carrying out his twisted white supremacist ideas, but a continuation of a long history of anti-Mexican violence that has pervaded Texas at every turn. 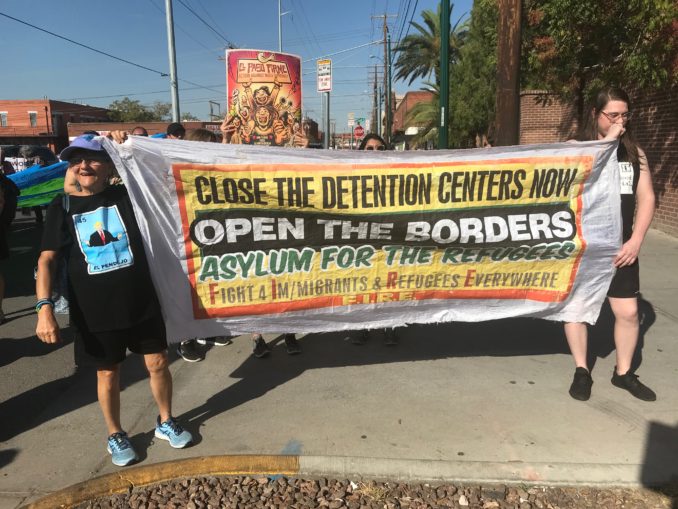 Delegation of FIRE (Fight for Im/migrants and Refugees Everywhere) in El Paso Sept. 7-8 in solidarity with mobilization against white supremacy after racist mass shooting.

Fernando Garcia, executive director of the Border Network for Human Rights, explained that talk in the media and by politicians blaming video games, mental health issues and availability of guns ignores the true issue of the ongoing history of racism against Mexicans, which has existed for centuries and is now being reinforced by the White House. “We challenge white supremacy,” said Garcia.

The events were organized by the Border Network, along with the Refugee and Immigrant Center for Education and Legal Services (RAICES) and National Day Laborers Organizing Network (NDLON). They were supported by dozens of organizations, from the Poor People’s Campaign, the Coalition to End Child Detention, Centro de Trabajadores Agrícolas Fronterizos, La Mujer Obrera, Planned Parenthood and Usual Suspects.

Beginning with a press conference on Sept. 5, Garcia explained why the organizations planning the flurry of events were not using the popular slogan of “El Paso Strong.”

“I’m very disappointed with politicians who wear El Paso Strong buttons, yet they sit on City Council or the school board and they carry out attacks against our immigrant communities through displacement, gentrification, environmental racism and school closures in the poorest neighborhoods,” said Garcia. “White supremacy doesn’t only come from the outside.”

Leading up to the music fest, a mural was unveiled that was dedicated to the shooting victims, a community reception and a private meeting between the artists and victims of the shooting. The musicians also visited a detention center and shot a video against childhood detention and family separation.

On Sept. 7, an early crowd gathered at the farmworkers’ center for a spirited march to Sacred Heart Church for breakfast and a community rally in the church hall.

The El Paso Firme Musicfest and Action drew thousands from throughout Texas, as well as from Mississippi, New Mexico, Arizona and California, to declare war on white supremacy.

Featuring popular artists from California, Mexico, Guatemala and Chile, the music was interspersed with testimonies from some of those who survived the shooting on Aug. 3; victims of Immigration and Customs Enforcement raids and family separation; Central American refugees in Juarez; and residents of Sunland, N.M., who deal with border militarization and Border Patrol abuse.

Before the final act, as teens were chanting “Cuco! Cuco!,” survivors of the shooting, who had been trapped inside the store while the massacre was going on, walked onto the stage and the crowd fell silent. Guillermo Glenn, 78, spoke of the terror he had felt and then challenged the crowd to heed the call to action against white supremacy.