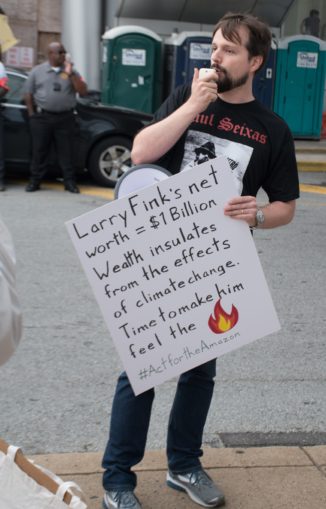 Demonstrators gathered outside the Circa Center in Philadelphia on Sept. 5 where BlackRock, the world’s largest investment firm, has a regional office. With more money invested in the fossil fuel and agribusiness industries than any other company in the world, BlackRock’s responsibility for the current climate crisis is huge.  After Brazil’s far-right President Jair Bolsonaro was elected, BlackRock announced plans to expand its operations there.

Speakers called on BlackRock billionaire CEO Larry Fink to use his clout to curb Amazon rainforest destruction, not to encourage further forest clearing. The action, across from Philadelphia’s the busy Amtrak station, received broad support from drivers passing by. The event was initiated by local activists with family in Brazil.