More than 400 ferry workers at Alaska Marine Highway began picketing when their ships arrived in port on July 24. These workers help run the Marine Highway system that connects 30 remote communities and islands across the state. The Inlandboatmen’s Union, an affiliate of the Longshore and Warehouse union (ILWU), represents the largest group of workers.

The IBU ferry workers were fighting pay cuts and a higher health care contribution demanded by Gov. Mike Dunleavy, who had already slashed ferry funding by 75 percent earlier this year and keeps pushing for privatization. (IBU memo, July 26) “We tried to work with the state, but we’re just beating our heads against the wall,” a union official told USA Today, calling the strike a last resort. (July 24) Their last contract expired in 2017, and the workers have been operating under interim contracts since then.

Solidarity from major unions and a support demonstration July 29 in Bellingham, Wash., where one ferry docks, helped win the strike. IBU reached a tentative agreement Aug. 2 for a three-year contract (one year was all the state had offered). Though their pay will still be frozen at 2017 levels, the workers will get a 1.5 percent increase in 2020 and 2021. And while the workers will begin contributing to their health plan in 2021, they will not automatically lose coverage when they’re not working, and they will no longer have to pay for hotels out of pocket. (Reuters, Aug. 2) This is the first IBU ferry worker strike since 1977 and a partial win! 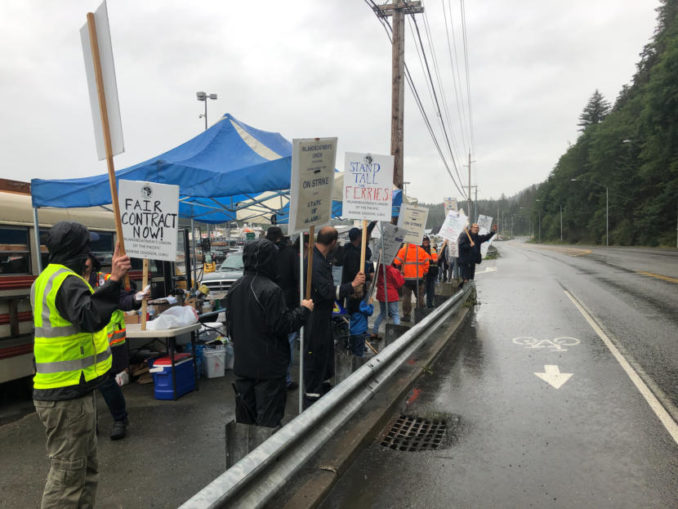 Kennametal is a ridiculously profitable company that received $2.4 billion in revenue in 2018. That same year, President/CEO Christopher Rossi was given a total package of more than $5.7 million in salary and stock options, including a $500,000 bonus. (UEunion.org, Aug. 12) The community and other unions are siding with the workers — rallying with them and dropping off food, coffee and donuts. Restaurants are providing discounted pizza and more. (Greenfield Recorder, Aug. 14)

On Aug. 15, the company agreed to return to the bargaining table Aug. 20-21. If the union doesn’t get a reasonable deal, the workers vow they’ll return to the picket line. (#Union Strong, Aug. 15)

The latest strike by part-time, unorganized Amazon workers occurred at a delivery center in Eagan, Minn., on Aug. 8. This time it wasn’t about job safety, work conditions or religious freedom, but about lack of parking, which caused workers to be late punching in. Appeals to management were ignored for months. Then the bosses issued an ultimatum that double-parked cars would be towed and owners fined $350 if cars blocked vans and shuttles.

The angry workers immediately walked out, vowing not to go back until the situation was addressed. Near midnight that day, Amazon issued a statement that it would provide additional parking across the highway where workers could punch in and that it would cover towing fees already incurred. (gizmodo.com, Aug. 8) There is nothing like a strike to grab the bosses’ attention!

Some 58 airline catering workers, represented by UNITE HERE, blocked intersections near American Airlines’ headquarters in the Dallas-Fort Worth airport and were arrested during a protest over pay so low they can’t afford health benefits. The union says one in four workers hired by catering contractor LSG Sky Chefs earns less than $12 an hour. The union is pressuring American, Delta, United and other airlines to pay more to catering companies so they can improve pay and benefits for workers. UNITE HERE, which represents 11,000 LSG workers, is targeting American because it’s LSG’s biggest customer.

Bobby Kirkpatrick, a truck driver who flew in from Charlotte, N.C., for the protest, said he makes less than $16 an hour after 38 years. “American squeezes Sky Chefs so much, and then [Sky Chefs says] they can’t pay us as much.” (DallasNews.com, Aug. 13)