It is rare that primary elections hit the news cycle like a thunderclap. Yet political observers across Latin America see the Aug. 11 primary in Argentina as indicating a continental shift, reversing the right-wing wave in that region. Some even call it a setback for Donald Trump.

Mauricio Macri had won the 2015 elections in the second round by a narrow margin against the opposition, a continuation of the Cristina Fernández de Kirchner government but moving rightward. Its candidate, Daniel Scioli, aroused no enthusiasm among the left.

Macri’s regime has been lined up internationally with U.S. President Donald Trump, Brazil’s Jair Bolsonaro and Colombia’s Iván Duque against Venezuela, Nicaragua, Bolivia and Cuba. He turned the Argentine economy over to the International Monetary Fund. In turn, the IMF tried to guarantee Macri’s reelection, with a $57 billion loan that it hoped would avoid a default on Argentina’s debt.

Under Macri’s government during the last three years, the number of people living in poverty has expanded, jumping to 35 percent in the last few months, while the purchasing power of workers has plunged. His regime has closed schools, cut health services and allowed homeless people to freeze.

This year Macri’s main opponent, The Front for All, is running Alberto Fernández for president and Kirchner, who was president from 2007 to 2015, for vice president.

Because most parties had only one set of candidates for the upcoming presidential elections in October, the Aug. 11 primary took the form of a popular poll of the parties. Observers expected Macri’s party, Together for Change, to come in a close second to the moderate opposition party, the Front for All, maybe losing by 4 points but still in a position to contend. 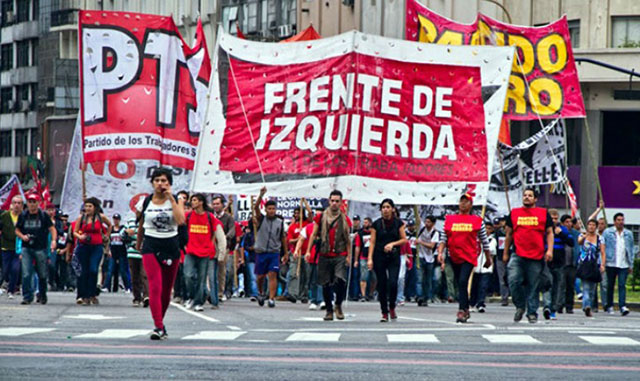 Instead, the opposition trounced Macri’s party by 48 percent to 32 percent (percentages were rounded off). While nothing is guaranteed, the 16-point spread indicates an electoral victory for the opposition in the first round, even if most of the remaining 20 percent were to shift to Macri.

A more left-wing, pro-working class and anti-imperialist coalition called the Left and Workers’ Front got 3 percent of the vote, enough to play a political role.

Analyzing this election, Argentine Marxist Claudio Katz wrote, “Macri promoted resentment against the poor, but triggered massive rejection of the ruling elite. He tried to rebuke the past decade [of Kirchnerism] and consolidated the people’s indignation with the overwhelming current role of his administration.” (lahaine.org/katz, Aug. 19)

Macri’s own reaction to the vote indicates a certain panic. Macri said on Aug. 14 that he will cut income taxes for workers and increase subsidies for social services. Given the turmoil in the economy, this is too little, too late. Brazil’s ultra-rightist Bolsonaro,  in his usual exaggeration, also warned of massive Argentine migration to Brazil should Kirchner’s party win, calling her a Bolivarian — a form of red-baiting.

A mere electoral change is insufficient to bring a real reversal of right-wing policies as long as imperialist and capitalist wealth controls the economy. However, such a change can encourage mass actions in Argentina, especially in the period between now and the Oct. 27 election. A day of protest is set for Aug. 22, which will give an indication of the struggle’s direction.