Workers World Party has always recognized the right of the people of Kashmir to self-determination. WWP considers Kashmir to be an oppressed nation under the rule of India.

At this time, the entire state, called Jammu and Kashmir, is under total lockdown and martial law. The Indian government has more than 600,000 Indian troops in Kashmir. They act as an army of occupation against Kashmir’s 14 million people, the majority of them Muslims. 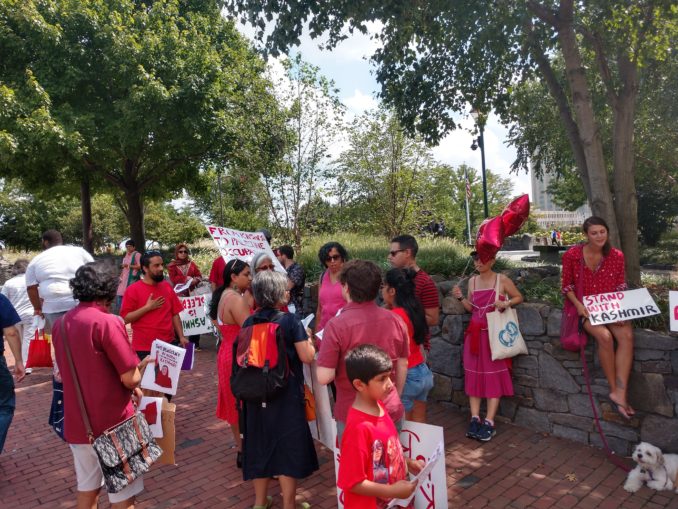 Philadelphia demonstration in solidarity with Kashmir

All communications have been shut off, including internet, phones and social media. Schools and markets are closed and millions of people are under complete curfew and incommunicado, not even allowed to go outside. Indian police have opened fire on protest demonstrations in Srinagar, the capital, and other towns and cities. Hundreds have been arrested.

All autonomy was revoked by an Executive Order of Indian Prime Minister Narendra Modi on Aug. 5, which has now become Article 370 of the Indian Constitution. This wiped away a decades-old provision that gave Kashmiris special land ownership rights in the area, which is located in a fertile valley between rugged mountains. It will encourage millions of Hindus from India to move into the valley.

For 100 years, Britain used “divide and rule” tactics that have left a legacy of national, and especially religious, animosity among all the peoples of the Indian subcontinent. The U.S. and Britain have continued to exploit these differences to keep all South Asia divided.

At this time, Modi and his right-wing Hindu nationalist BJP party have a close alliance with U.S. imperialism. Earlier, especially during the war in Afghanistan, it was Pakistan that had a close relation with the U.S. Pakistan is still deeply in debt due to extensive U.S. weapons purchases.

The BJP has also gained the presidency in India. However, it is Prime Minister Modi who wields the power and has used anti-Muslim attacks throughout India to build a base of support among the Hindu majority population. This is similar to the way Trump in the U.S. has whipped up racism, white supremacy and anti-migrant attacks.

Muslims are an oppressed minority in India, with almost 15 percent of the population.

Under British rule of the Indian subcontinent, Kashmir was a princely state with a Muslim majority but ruled by a Hindu monarch. This oppressive system was kept in place by Britain’s colonial policy.

In 1947, a British partition plan divided the subcontinent into India and Pakistan. Most Kashmiris wanted independence, but the British plan only allowed them the option of being part of either India or Pakistan, whose competing claims on the region ended in a war.

A United Nations-sponsored plebiscite for the people of Kashmir has been promised since 1948 but has never taken place.

However, Kashmir was supposedly guaranteed a special status of autonomy within India that ensured the Muslim-majority state its own constitution and independence over all matters except foreign affairs, defense and communications. This status has now been illegally revoked by Modi’s declaration.

Demonstrations in solidarity with Kashmir have occurred around the world.