Portland’s Hands Off Venezuela PDX sponsored a Skype teach-in on Aug. 17 with Dr. Layla Brown-Vincent, an assistant professor of Africana Studies at the University of Massachusetts in Boston, who spoke about the role of racism in Bolivarian Venezuela to a room of 25 Oregonians. She said, “Just as Haiti was a stronghold of Black liberation in the late 18th and 19th centuries, and Cuba became a beacon of global struggle for Black/African liberation in the 20th century, Venezuela’s Bolivarian Revolution … is the most earnest attempt to facilitate Black liberation of our time.” 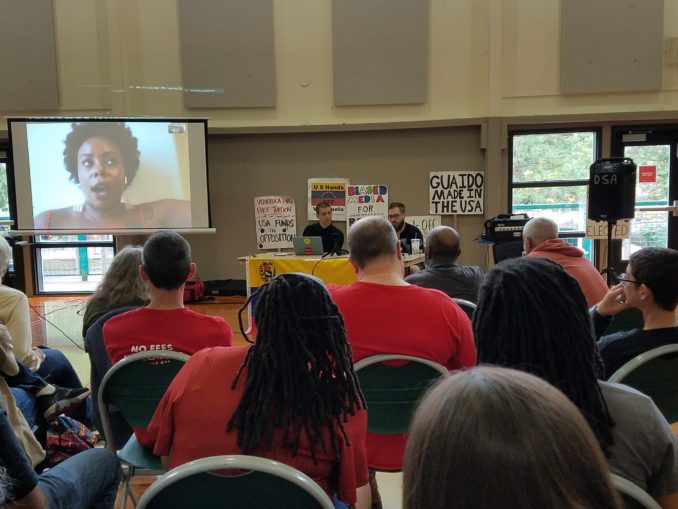 Dr. Layla Brown-Vincent is an assistant professor of Africana Studies at the University of Massachusetts in Boston.

Brown-Vincent recalled the 2017 murder of Orlando Figuera, a 21-year-old grocery worker, caught in the middle of opposition protesters in Venezuela. Figuera was doused with gasoline and burned to death while right-wing white supremacists yelled: “Hey Black guy, are you a Chavista? You see what happens to Chavistas?”

She noted that nearly 54 percent of Venezuela’s citizens are of discernible African ancestry. “Afro-descended people’s realities have become more visible since 2002, and their realities increasingly inform the political rhetoric/agenda of the Bolivarian Revolution, making Blackness synonymous with the people, socialism and Chavismo—​while whiteness is synonymous with capitalist exploitation, anti-Blackness and the anti-people counterrevolution led by the opposition.”

Brown-Vincent called opposition leader Juan Guaidó a white supremist who is part of the U.S.-led drive to maintain racial capitalism across the globe. Backed by the U.S., Guaidó attempted to declare himself president of Venezuela in January.