Fifty years ago, in the summer of 1969, a growing number of people in the United States believed a revolution leading to socialism was possible, even in this country. An event in August in the tumultuous summer of that year revealed one path this revolution might follow.

That June, the Stonewall Rebellion in New York’s Greenwich Village opened the road to the liberation movement to end the repression of  LGBTQ+ communities.

In July 1969, young Puerto Ricans living in the U.S. founded the Young Lords Party, with revolutionary goals. (The 50th anniversary this year coincided with a massive uprising in Puerto Rico that — for starters — ousted the governor.)

The Black Panther Party had become the face of the Black Liberation Movement in the years before 1969. This revolutionary organization was still growing that summer despite horrific police repression.

At the same time, the movement opposing the U.S. war against Vietnam was not only winning majority support in the population, it was taking root among the rank-and-file troops — the GIs — in the U.S. military itself. As a member of Workers World Party, I did my main political work that summer in the New York-based national office of the American Servicemen’s Union, an organization perfect for the GI movement.

The ASU aimed to win rank-and-file service members of all genders and nationalities to join the organization. This union would fight for higher pay and better conditions. More important, it would combat racism and fight for the right to refuse to be sent to Vietnam.

The ASU aimed to break the chain of command that allowed the bankers and heads of corporations, working through the Pentagon generals, to order privates and corporals to kill and die for the interests of U.S. imperialism. The emergence of Hawai’i Sanctuary showed one way that break in the chain of command might take place.

That I was present at the beginning of the sanctuary was almost a fluke. The anti-war movement in Hawai’i — the Hawai’i Resistance — motivated by a language student at the University of Hawai’i named Susan Steinman, had invited ASU Chairperson Andy Stapp to speak at a demonstration at Waikiki Beach in Honolulu on Nagasaki Day, Aug. 10. Stapp’s spouse was about to give birth, so he sent me in his place.

Hawai’i Resistance announced and promoted the GI-Civilian Walk for Peace that Aug. 10, the date picked to commemorate the atomic massacres of Hiroshima and Nagasaki. The ASU co-sponsored the action.

At the rally at Waikiki Beach, Airman First Class Louis “Buff” Parry announced that he would end his “complicity with the U.S. military and its crimes against humanity” and take sanctuary at Honolulu’s Church of the Crossroads. 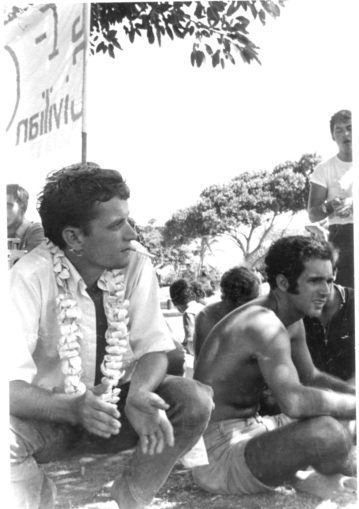 Louis ‘Buff’ Parry, GI who started the Hawai’i Sanctuary, at the demonstration on Waikiki Beach in Honolulu, Aug. 10, 1969.

Had it stopped with Parry, it would have been an individual heroic protest of conscience. What happened, however, is that following his talk, one GI after another followed Parry’s example. This included a Marine military police officer who had been sent to apprehend any GIs who were absent without official leave (AWOL).

That evening, we counted eight service members in the Sanctuary. They and another 50 to 100 people slept on the floor of the church.

We learned soon that Black Marines at the nearby Kaneohe Marine Corps Air Station had torn apart the mess hall to protest prejudicial job assignments and racist harassment. This rebellion added another dimension to the movements shaking the military. 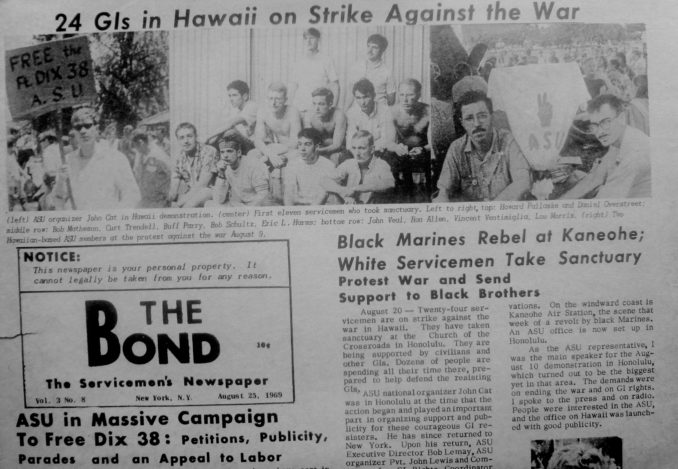 Front page of the ASU newspaper, The Bond, August 1969.

In an attempt to unite the military resistance at the Crossroads with this outbreak of the Black Liberation struggle at Kaneohe MCAS, I suggested to the movement youths at the church that we hold a demonstration of solidarity with the Black Marines at the base entrance. And we did the next afternoon.

While this brought no miraculous development of solidarity, the next night Marines from Kaneohe brought a donation of 60 pounds of meat to the church to help feed the resisting troops and their allies.

Ever since an 1893 planters’ uprising led to the U.S.’s illegal annexation of the nation of Hawai’i in 1898, the islands, especially Oahu, have always been central for U.S. domination of the Pacific. In 1969, amid Oahu’s lush tropical forests and beaches were five major military bases for sailors, soldiers, Marines and air personnel, including Pearl Harbor, altogether home to maybe 100,000 troops. Other tens of thousands of GIs were in Hawai’i on R&R leave from Vietnam.

By Aug. 17, a week after Parry announced the Sanctuary, some 17 resisters spanning all the armed services had joined Parry in Sanctuary and received a standing ovation from the 350 people at the church.

A tiger by the tail

The Hawai’i Resistance, the church elders and the ASU had a tiger by the tail. To continue to reach out and expand the movement needed determination, a willingness to take big risks and a well-organized and disciplined organization, united in this goal.

Instead, like most movements that spring up quickly, it had a leadership with diverse goals. There were church leaders wanting to make a moral statement, activists wanting to send a strong message of dissent but not to go too far, and a few revolutionaries wanting to overthrow the generals whatever the repercussions.

Meanwhile, most of the young people at the church were similar in their attitudes to those who were among the more than 400,000 people at the iconic Woodstock concert on Aug. 15-17 of that year. They wanted no part of the Vietnam War. How to fight against it was a question they had few answers to, as yet.

In addition, the Sanctuary movement faced imminent repression from the Pentagon — although the generals had to worry that raw repression would spread the movement even further.

Even under a hesitant leadership and the inevitable problems that develop when people are confined, the Sanctuary movement grew to about 35 soldier-resisters in the course of a month. Another church, a Unitarian, also opened its doors.

Meanwhile, the mass mutiny of a combat unit, the 196th Light Infantry Brigade, took place in Vietnam. A big headline in the Aug. 26, 1969, New York Daily News read: “Sir, My Men Refuse to Go.” It was the first of 10 major mutinies during the war.

President Richard Nixon had already announced plans to gradually remove U.S. troops. The U.S. forces were to be replaced by expanding the puppet army of South Vietnam in a plan known as “Vietnamization” and by increased use of air power. By January 1973, the U.S. stopped drafting youth. The plan was to replace a drafted “citizens’ Army” with a professional army, relying on air power and high-tech weapons.

But in the end, after much sacrifice, the Vietnamese drove out the U.S. in 1975.

During the first month of the Sanctuary, the military police and military intelligence bided their time, keeping a close watch on the movement, while trying to catch and arrest individual GIs. They hovered about, picking off GIs where they could, apparently hoping the movement’s energy would decline.

Then, after the movement had weakened and some of the resisters had left to organize elsewhere, on Sept. 12, about 40 MPs stormed the grounds at Crossroads, kicking in all locked doors, including those to the church. They only found and arrested eight GIs, but the police action ended the Sanctuary.

Throughout the five weeks of the Sanctuary, the approach of the ASU delegation focused on “How can we continue to expand this movement until it affects the entire Armed Forces, from Western Europe to Vietnam?” To move in that direction, one needed to have the attitude and the ideology that looked at the collapse of the U.S. Armed Forces as both positive and possible.

By strengthening the political and organizational development of the GIs to fight for their own class interests, the ASU was able to play a major role in working toward smashing the imperialist state.

The Crossroads became another important chapter in this struggle, even if it fell short of my early dreams and many people’s hopes. The Hawai’i Resistance continued to work with GIs into the mid-1970s, helping to organize some successful struggles. In 1971 it began publishing an impressive GI newspaper, Liberated Barracks.

Louis “Buff” Parry moved to Edmonton, Alberta, Canada where he was active in the Edmonton Coalition Against War and Racism.

Privates Lewis and Laxer continued to resist being sent to Vietnam and continued organizing at Fort Dix, N.J. When they finally left the Army, they became ASU organizers in the New York office. Susan Steinman never finished her degree in languages, but became the Hawai’i organizer and later a national field organizer for the ASU.

For more information on the ASU or on the individuals mentioned in this article, read “Turn the Guns Around: Mutinies, Soldier Revolts and Revolutions” by John Catalinotto. Or listen to his half-hour podcast, part of a series on the Vietnam War prepared by Courage to Resist, at couragetoresist.org/podcast-john-catalinotto.