The state is waging war on migrants and refugees. As they flee from violence, political instability and the growing climate crisis, the U.S. is doubling down on a cruel, white supremacist policy of exclusion. Immigration and Custom Enforcement and Customs and Border Patrol agents are rounding up migrants, placing them in detention centers with horrible conditions and deporting them back to countries where they may face death.

All people with a conscience must rise up and oppose the state’s vast detention and deportation machine.

This machinery of devastation is not run by the state alone. Corporations that seek to turn a profit from human misery have joined hands with ICE and CBP. Private companies run the horrific detention centers, sell the weapons and equipment used by ICE and CBP, and charter flights to deport migrants.

If activists are to put an end to the detention and deportation machine, they must use direct action against both the public and private facilitators of this oppression. They must focus on the logistics of detention and deportation and make it impossible for the government and companies to continue these racist policies. Already, there have been incredible acts of resistance, such as the walkout on June 24 by hundreds of Wayfair workers who were protesting their company’s sales to these concentration camps. 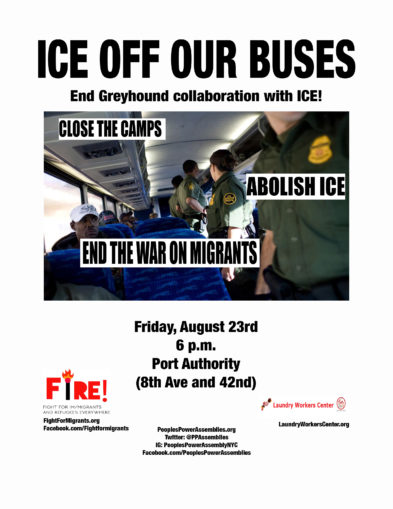 A major campaign begins on Aug. 23. Fight for Im/migrants and Refugees Everywhere (FIRE), the Laundry Workers Center (LWC) and the People’s Power Assemblies/New York (PPA/NY) will hold a rally in New York’s Port Authority Bus Terminal to demand that Greyhound kick ICE and CBP off their buses.

All over the U.S., Border Patrol agents stop and board buses where they racially profile passengers looking for undocumented im/migrants. These unconstitutional searches and seizures are a sign of the growing police state. People should be free to travel without jackbooted thugs stopping them to check their papers. FIRE will inform passengers of their rights, while building momentum for future actions.

By focusing on the logistics of the detention and deportation machine, im/migrant rights activists can weaken its ability to operate. ICE and CBP searches must be stopped. Holding children in detention centers must end. All deportations must be halted.  Greyhound is only a first step.

As momentum builds in this struggle, so will its organizing capacity. Any company that takes part in deporting migrants or running concentration camps should be the focus of direct action.  These corporations, which include Palantir that does data-mining, Amazon that provides facial recognition technology and Enterprise that supplies ICE vehicles, should be the focus of direct action. There should be no material support for ICE and CBP.

Im/migrants and refugees must also be informed of their rights. “Know Your Rights” trainings have already led to migrants and their allies fighting back against ICE raids. ICE agents have been turned away from apartment complexes by residents who refused warrantless searches. Across the country, ICE and CBP are being pushed back.

In Nashville, Tenn., neighbors formed a multinational human chain around a migrant family that was being harassed by ICE agents. This was a heroic action that should be repeated everywhere im/migrants are endangered.

The demands of the racist Trump regime have put a strain on ICE and CBP resources. As the movement to #closethecamps grows stronger, the fascistic ICE and CBP will grow weaker. This is how people’s movements will abolish these vile agencies.

As the tide of white supremacist terror rises, it shows how necessary it is that an even greater surge of working-class solidarity meet this threat. Now is the time for our class to unite and build for the future. The power of the people must not be underestimated.

The working class is rising. From Hawaii to Puerto Rico, mass movements are disrupting the repressive power of the state. A better world is possible. Concentrated people’s power can close the camps, open the borders and abolish ICE! Join with FIRE, LWC and PPA/NY on Aug. 23. Then the revolutionary work will begin.