Five years ago a racist white cop, Daniel Pantaleo, put an unarmed Black man, Eric Garner, into a chokehold, on July 17, 2014, on Staten Island, N.Y. Other cops furiously compressed Garner’s chest as he lay on the ground and cried out, “I can’t breathe” until he died.

Pantaleo was never charged, much less indicted, for the death of Garner.  In response, Garner’s family and the progressive movement have continued to fight for justice.

When the U.S. Justice Department refused to file charges against Pantaleo on July 16, that latest outrage prompted multiple demonstrations in front of Pantaleo’s home for several days, starting July 17, the fifth anniversary of Garner’s death. 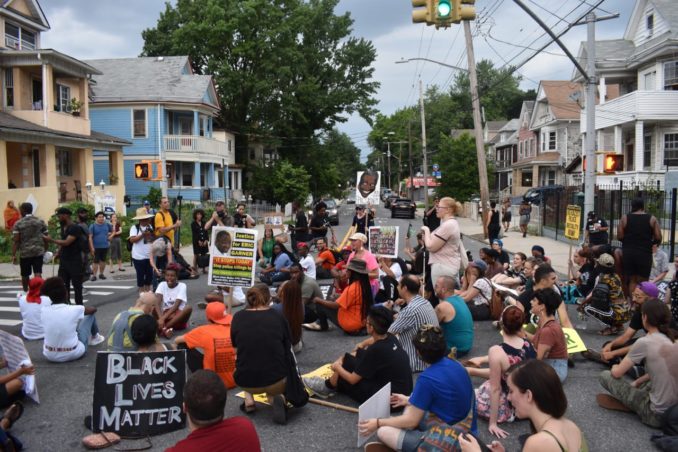 At the Democratic Party presidential debates in Detroit July 31, two Black Lives Matter protesters disrupted the candidates with chants of  “Fire Pantaleo.” The outcry was directed toward New York City Mayor Bill de Blasio, who is running for president in 2020.

Tamika D. Mallory, one of the protesters, stated why she confronted de Blasio on her Aug. 1 Twitter feed: “We could not sit silent while @NYCMayor Bill de Blasio misrepresented his positions on Stop and Frisk and continues to employ the police officers who killed #EricGarner, in particular Daniel Pantaleo.”

This righteous outburst helped to give national and international visibility to the case, so that de Blasio was forced to pay lip service to the issue. Rosemarie Maldonado, a NYC deputy police commissioner who oversees disciplinary hearings, has recommended that Pantaleo be fired. He was been on desk duty since 2014.

Ramsey Orta, the young Latinx man who videotaped Garner’s death, was convicted on drugs and weapons charges and is currently serving a four-year prison sentence at the Rikers Island Prison Complex.  His real “crime” was exposing what happened to Garner.

Not an isolated incident

The racist killing of Garner was not the first time NYC police used the chokehold method against people of color. The New York Police Department supposedly outlawed the chokehold as a method of restraint in 1993. But on Dec. 22, 1994, Anthony Baez, a Puerto Rican living in the Bronx, died when Officer Francis Livoti put him in a chokehold, after a football hit a police car. Livoti, with a sordid history of police brutality similar to Pantaleo’s, was fired and convicted in a federal court for violating Anthony Baez’s civil rights.  He went to federal prison for seven years.

Since Garner’s death, people have brought over 800 official incidents to the Civilian Complaint Review Board about New York police using the illegal chokehold. With some cases still pending, only 2 percent of the outcomes have resulted in police facing any “disciplinary” action.  (New York Times, May 9)

Counter this lack of accountability with what happened in Brooklyn and Harlem on July 20, one of the hottest days of the summer.  Black youth were being harassed by New York cops for the so-called “crime” of turning on fire hydrants to cool off. The oppressive heat was compounded by Con Edison turning off power to whole neighborhoods, cutting off air conditioning. A few of the youth doused the police with water — only water.

The cops turned that into a witch hunt, with over a dozen youth targeted for roundups. At least three have been arrested so far. These youth could face jail time if convicted, since there are now racist calls to make “dousing a cop” a felony, punishable with a sentence of 1 to 4 years in prison.

These incidents are just the tip of the iceberg when it comes to the many forms of police brutality — from stop-and-frisk to tasering to chokeholds on disproportionate numbers of Black and Brown people. The varying forms simply reflect the essence of why the police exist in New York City  — and in every city or town, large and small, in the U.S. 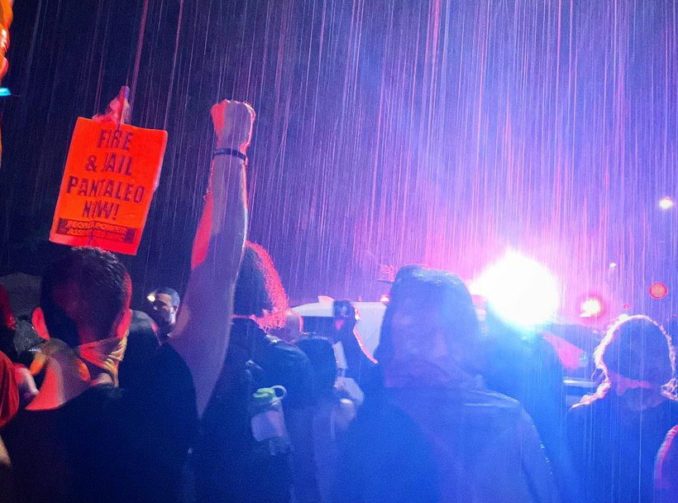 Protestors persisted into the night, through torrential rain.

Role of police under capitalism

To label individual cops as good or bad obscures the objective role of the cops in a class society where there exist rich and poor, bosses and workers, and where the ideology of white supremacy dominates every sector of society, together with patriarchy and gender oppression.

The police — along with the courts, judges, prisons, etc. — are part of the repressive state apparatus. It is an apparatus that protects the interests of a tiny, elite ruling class of bosses and bankers who super-exploit the labor and resources of millions of workers of all nationalities on a global scale to make superprofits.

And if the workers dare to rebel against their conditions of poverty and oppression, the state will use every weapon at their disposal to repress them — especially police occupation and mass incarceration.

There are many instances when the police will abuse or even kill a nonthreatening individual like an Eric Garner, Anthony Baez or Sandra Bland just because they are members of an oppressed nation. The cops know they will not face any legal retribution. Why?

Because under capitalism, the police are above the law — because they are literally above society. And therefore, the police, just like prison guards, are not workers. The police and prison guards should be banned from the right to organize unions or be in an existing union.

People’s justice for workers and for the oppressed

The working class is the only productive class in a capitalist society, whether in the industrial or service sector, whether employed, unemployed or underemployed.  The police produce nothing of value to society at all. Before Eric Garner died, he was selling individual cigarettes on the street to support his family. He happened to be a Black worker targeted by the police on that particular day.

The progressive movement, along with the Garner family, which has sacrificed so much, deserve all the credit for putting mass pressure on bourgeois politicians like Mayor de Blasio, prosecutors and the police to come to a decision about whether Pantaleo is fired or not. It is very rare to even have a debate about a cop being responsible for murder.

If there were people’s justice, Pantaleo and his accomplices would have been charged, indicted and incarcerated for the murder of Eric Garner.

But this kind of justice will happen only with a socialist revolution — when the workers take power to run society to meet human needs — and sweep away all remnants of the repressive state, along with the entire capitalist system which gives it a reason to exist.