Anti-racists won a victory Aug. 2 against suppression of their protest when a judge dismissed charges against two activists. The two, Jody Anderson and Enzo Niebuhr, had placed KKK-reminiscent white hoods over a statue depicting a Confederate woman and child on the grounds of the state capitol. The activists had been charged with disorderly conduct and defacing a public statue. 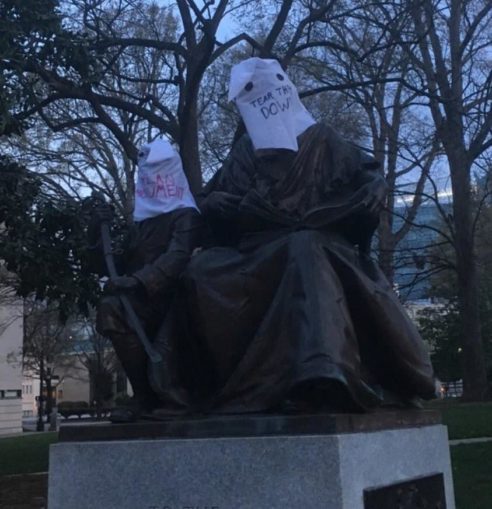 A statement by Smash Racism Raleigh, organizers of the April 21 protest where the two were arrested, described their efforts: “Activists allegedly climbed the monument and placed Klan hoods over its two heads to properly contextualize the statue’s role in perpetuating white supremacy and reinforcing both Jim Crow-era and modern racist violence and oppression. …

“The Women of the Confederacy monument, as well as the other racist statues on the State Capitol grounds, have a dark history of oppression, violence and revisionism that has consistently attracted hate groups such as the KKK, the Sons of Confederate Veterans and Heirs to the Confederacy to the square for the last century.”

At the Aug. 2 trial, peoples’ attorney Scott Holmes pointed out that there is no law prohibiting people from climbing on the monuments or from placing objects on them. He challenged Capitol Police Officer Dustin Dobson, who outrageously claimed that putting white hoods on the monument was a “hate crime.” The prosecutor went so far as to liken that to burning crosses.

In a show of allegiance to white supremacy, however, after arresting Anderson and Niebuhr, the officer actually handed his baton to a Confederate supporter. At the trial, Dobson asserted that although he had never met this person before, he deputized the supporter at the scene.

The cop and prosecutor also maintained that Anderson’s and Niebuhr’s chants of “Fuck these racist statues! Fuck the Confederacy! Racist statues have to go!” represented abusive language. However, after a lengthy debate in court about the use of the expletive outdoors in a public space, Holmes moved to dismiss all charges. The judge concurred.

In Smash Racism Raleigh’s statement before the trial, the group affirmed that it “stands in solidarity with those wrongfully arrested and condemns the actions and beliefs of the white supremacist groups who use these monuments to glorify racism and bigotry. Smash Racism Raleigh additionally condemns the actions of the state capitol police and RPD [Raleigh Police Department] for their continued support and allegiance with white supremacist organizations and their statues. We call for an end to state-sponsored racism and the removal of all tributes to white supremacy from state capitol grounds.” (Smash Racism Raleigh’s live Tweet coverage of the trial can be viewed at tinyurl.com/yy5g3l92.)

Over the past couple of years, activists throughout the Triangle region of North Carolina have challenged the presence of Confederate statues and faced the wrath of the state as expressed through cops and courts. That the judge threw out the charges in this case is a victory won through the continued mobilization of anti-racist forces in the South.