On the 49th anniversary of Houston’s historic Chicano Moratorium Against the Vietnam War, Brown Berets from around the country gathered in Houston and marched the same route activists took on July 26, 1970, when over 1,000 Chicanos marched through east Houston to rally against the U.S. war in Vietnam. Led by Aztec dancers, the march drew approval as people came out of neighborhood houses to welcome the marchers. 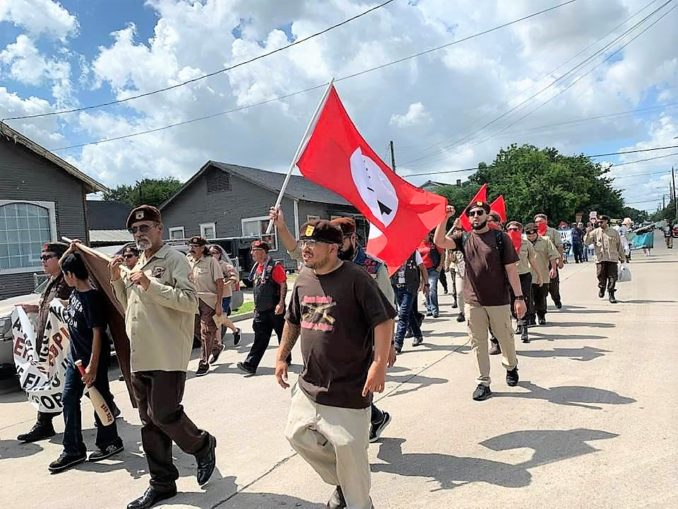 Brown Berets came from around the U.S. to march in anti-war commemoration in Houston July 26.

Activists came from around the country to Houston for the Brown Beret Unity Gathering, which included a formal meeting as well as the march and rally. They were from Sonoma County, Fresno and Inland Empire, all in California; from Colorado and Arizona; from Oklahoma City; Kansas City; Chicago; and from around Texas — Dallas, Houston, San Marcos, San Antonio and the Rio Grande Valley.

The Unity Gathering discussed plans for the 50th anniversary of the Chicano Moratorium scheduled for next year. One month after the Houston march in 1970, another even bigger Chicano Moratorium was organized in East Los Angeles, where the crowd grew to well over 30,000 people.

Each city attending had a Brown Beret speaker. Other speakers included Jesus Medel, the director of Museo Guadalupe Aztlan in Houston; Janie Torres, the sister of Joe Campos Torres, who was murdered by Houston cops in 1977; Bunchy Crear, chair of the Houston chapter of the Black Panther Party Alumni Association;  and a Houston representative of Fight for Im/migrants and Refugees Everywhere (FIRE).

Torres spoke of her brother, a Vietnam veteran, who was beaten beyond recognition and thrown into a downtown bayou “as racist Houston cops laughed and said, ‘Let’s see if the w-tb-k can swim.’”  Torres called for unity among all activists, saying this was the key to organizing to end oppression.

A speaker from FIRE extended solidarity with the Berets and invited all to protest the next day at the Greyhound Bus Station to call for a boycott of Greyhound until the company agrees to no longer allow the Border Patrol on their buses.

The rally ended with the Berets gathering for a group photo. Dallas Brown Beret Leroy Peña asked all to form a triangle with their hands in solidarity with the Kanaka Maoli people protecting their Mauna Kea mountain from investors and the University of Hawai’i Board of Regents who want to construct a sprawling $1.4 billion telescope complex on this sacred land in Hawai’i.