Immigrant groups and union workers rallied in front of North Carolina Gov. Roy Cooper’s mansion in downtown Raleigh on July 12, urging him to veto House Bill 370, the so-called “Show Me Your Papers” law.

HB 370 is an anti-immigrant bill that circumvents the local authority of sheriffs by requiring them to cooperate with Immigration and Customs Enforcement and assist in the federal government’s deportation pipeline or face financial penalties. Passage of the bill would lead to Black and Brown people having their detention extended in jail, even after they posted bail. 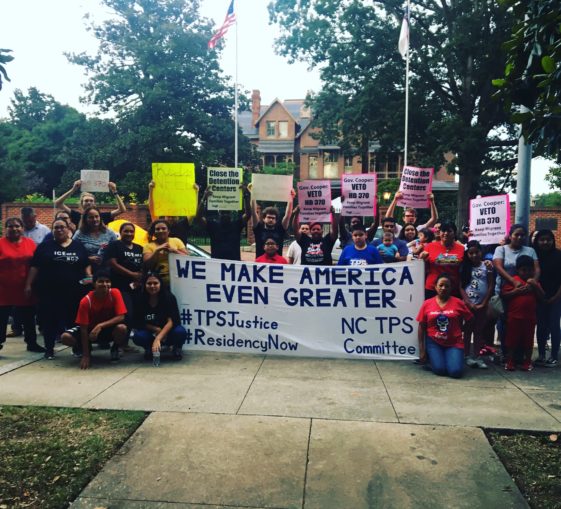 The bill is blatant political retaliation against the growing number of sheriffs across North Carolina who have pledged they will not assist ICE in targeting or detaining community members for so-called immigration offenses.

Black sheriffs were elected last fall in Wake, Durham and Mecklenburg counties after promising to end their cooperation with the federal 287(g) program, which has led to family separations, deportation of thousands, and great mistrust and fear in local communities.

Comite De Acción Popular, a group led by undocumented immigrants, organized rallies at the governor’s mansion every day during the week preceding the July 12 rally, inviting different groups to come in solidarity. On Friday, members of  United Electrical Workers (UE) Local 150, N.C. Public Service Workers Union, showed up to add their voices to the struggle.