Dozens of community activists traveled hundreds of miles from four states to Mechanicsburg, Penn., on July 24 to deliver petitions signed by 3,000 people from around the world, simply requesting the right to proper vision care for political prisoner Mumia Abu-Jamal. They expected at the very least that someone with authority in the Pennsylvania Department of Corrections would step out to accept the petitions. 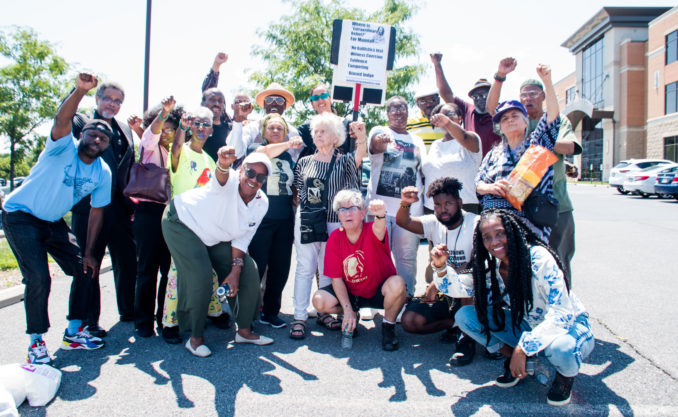 Mumia supporters gather together on July 24, outside PA Department of Corrections HQ in Mechanicsburg, PA.

The PA DOC instead placed several burly Capitol District cops and a couple of DOC staff members outside the front doors to “greet” the community representatives.

The activists fighting for Abu-Jamal’s freedom — representing a global movement for the freedom of all political prisoners — insisted on their right to speak to John Wetzel, head of the state prison authority or one of his near-equals, before handing over the signatures from thousands of Mumia supporters.

Outside the main doors of the state facility, the first of two non-uniformed men to speak to the activists was a Mr. Barnacle. When Pam Africa, representing the International Concerned Family and Friends of Mumia Abu-Jamal, asked who he was, he pulled out a badge marked “staff,” dated 2018. When told someone with real authority and current identification was needed, Barnacle eventually agreed to allow three participants to enter the building to deliver the petitions to a DOC official.

While the assembled activists waited to be joined by people in two additional vehicles from New York City, Megan Malachi, from REAL Justice, read the petition to the press titled “Act Now to Save Mumia’s Eyesight and to Demand His Release.” (tinyurl.com/y4s3ekpr)

“So far, the prison officials are discouraging and making complicated the eye-doctor’s ability to share with me the medical information that Mumia wants me to have. They have not scheduled his surgery. Every cooperative effort on these matters is being made by Mumia’s family and friends; still there is too much stalling by prison officials.

“We insist that SCI-Mahanoy and the PA DOC honor every legal step that Mumia needs to be taken, so that he receives quality eye-care immediately. He must no longer be subject to medical neglect or to any withholding of full information about his medical condition.

“The abuse Mumia suffered in the past nearly killed him, and even when finally addressed left him with cirrhosis of the liver. There is time for PA officials to turn a new corner.” (tinyurl.com/yxvmabkr)

Abu Jamal has a lot of trouble reading and doing other tasks that require good eyesight. His eyesight is seriously threatened by glaucoma, a vitreous detachment and cataracts in both eyes. These jeopardize his quality of life and wellbeing, as well as his journalistic profession.

The ophthalmologist whom Abu-Jamal was taken to see outside Mahanoy Prison recommends surgical procedures to remove the cataracts on both eyes.

But months of delays echo the years of delays Abu-Jamal experienced before the DOC was finally forced by a federal court to treat him with the cure for hepatitis C in 2018.

When three designated activists — Dr. Suzanne Ross, Rev. Keith Collins and a videographer — later tried to enter the DOC state headquarters, they were met by another DOC staff member, Ken Smith, who claimed he was a Major in “Special Operations,” but would not show any valid identification to that effect.

Smith then reneged on the earlier agreement and said he would take the petitions, but would not allow the representatives to enter the building and meet with a DOC official.

The activists were unbending in their demand that a valid DOC person of authority formally accept, “on the record,” the inch-think bundle at a location inside the building.

Dr. Ross, designated as one of the petition delivery trio, told Smith: “The DOC has already failed from 2015 to 2017 to make available to Mumia the cure that was available for hep C at that time. The two-year delay left Mumia with cirrhosis of the liver [and other hep C-related damage]. Mumia supporters are determined to prevent the damage that could be caused by a comparable delay in treating his visual problems … . We’ve been here before and met with people. One time it was with the head of the press office. Send us the press officer.”

Rev. Keith Collins, who visited Mumia on July 4 and was also appointed to deliver the petitions, said: “I’m a pastor, a decorated veteran, a paratrooper, also an ex-cop … . We just want to deliver these petitions … . Mumia told me he can see to get around but not to read and that’s very important — for a journalist to read and to study … . So we’re here … to get him access to the doctor … and to let him come home. He’s served forty years for a crime he did not commit.”

Despite arguing for over an hour, the activists could not get the DOC to relent. Because of the commotion and locked doors, when a FedEx worker tried to deliver a package, no one on the outside would sign for it, and he was told to come back another time.

Yet the DOC wanted petitions from 3,000 people to be handed over to undesignated staff, off the record, with no way of tracking the petitions, which could immediately be trashed.

Finally, Abu-Jamal’s supporters marched away, but not before Pam Africa said: “We’re leaving now, but it’s not over. Wetzel, we’re going to find out wherever you be at, cause there ain’t no power like the power of the people.” The group left chanting, with the petitions in Rev. Collins’ hands, undelivered.

The DOC’s refusal to meet with community representatives comes less than a week after the 3rd U.S. Circuit Court of Appeals upheld a lower-court decision that Corrections Department employees could be sued for their decisions regarding the 65-year-old Mumia. Abu-Jamal asserts his initial denial of treatment with two antiviral drugs for hepatitis C violated his constitutional right to be free from cruel and unusual punishment. In an unprecedented January 2017 decision, Federal District Court Judge Robert Mariani used that argument to order the DOC to treat Abu-Jamal with direct-acting antiviral medications for his hep C infection.

Abu-Jamal’s supporters argue that because deliberate delay resulted in Mumia’s cirrhosis of the liver and because the current delay in cataract surgery may cause further deterioration in his overall health, he should immediately be released to seek treatment that the DOC refuses to make readily available to him.

Abu-Jamal is not alone in enduring these cruel and unusual assaults on his health. According to the Bureau of Justice Statistics, the number of state prisoners age 55 or older increased 400 percent between 1993 and 2013. Across the nation elderly prisoners experience a torturous journey toward the end of their lives, suffering from life-threatening illnesses without adequate treatment or any “compassionate release.” Abu-Jamal’s appeals for his right to treatment and for his release could result in increased rights for the freedom of all prisoners experiencing cruel and unusual conditions.

Abu-Jamal is serving a life sentence in the Pennsylvania prison system. The sentence, for the alleged 1981 murder of a Philadelphia policeman, came down in the context of a corruption-ridden and racist police department. That sentence has been declared unfair by human rights organizations and prison activists the world over.

Although Abu-Jamal has suffered a travesty of justice in the denial of his many appeals over the years, now both the Philadelphia District Attorney and the courts have recognized his right to have his appeals re-argued. This was determined by a momentous decision by Common Pleas Court Judge Leon Tucker in December 2018. Abu-Jamal is currently waiting for his Post Conviction Relief Act appeals to be reheard before a new panel of Pennsylvania Superior Court judges.

While the PA DOC remains resistant to giving Abu-Jamal his full rights to timely health care, and while the political powers in Pennsylvania continue to vilify him, Abu-Jamal and his supporters remain strong and energized by his recent court victories.