This article is based on a talk given at the July 25 Workers World Party meeting.

The long-smoldering fight of the Kānaka Maoli people to save sacred Mauna Kea in Hawai’i blew up like a volcano on July 17 when work crews arrived to begin construction on the Thirty Meter Telescope (TMT).  Elders, some using wheelchairs, strollers or canes, demanded to be taken to the front line to be arrested. 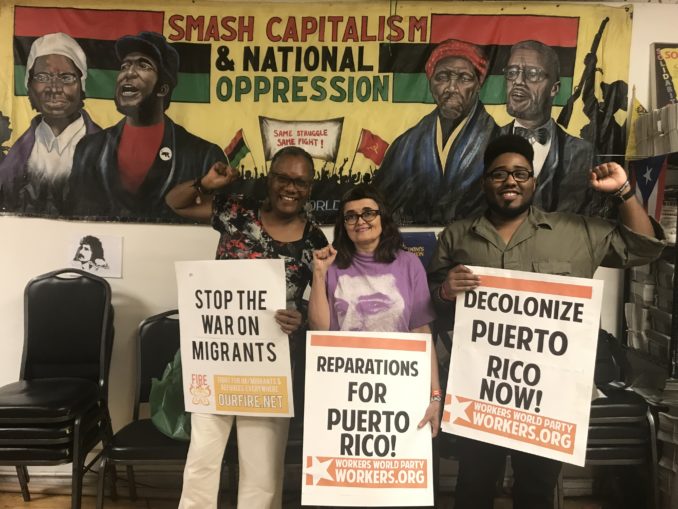 The blockade forced work stoppage of dozens of astronomers and researchers. Since the arrests of 35 people on July 17, thousands of Hawaiians have blocked all access to the mountain. They oppose further damage and desecration of the mountain, on which 13 smaller telescopes have been constructed since 1960. Each one was called “the last telescope.”

Hawai’i Gov. David Ige signed an emergency proclamation threatening Mauna Kea Protectors with police and National Guard. Over 2,000 Kānaka Maoli turned out in response to the arrests and threats to pack the base of the mountain.

Gov. Ige attacked the Protectors again on July 19, alleging illegal activity, but local media reported that the opposite was the case. KHON2 TV news stated:  “There are absolutely no signs of drugs or alcohol. No one is even allowed to smoke here.” (July 20) The media reported that a great number of volunteers, seasoned organizers, were feeding thousands daily meals and snacks from free kitchens, running medical tents, recycling, cleaning porta potties and hauling trash.

Volunteers told KHON2 that anyone who comes into the Pu’uhonua is welcome. Pu’uhonua means “place of refuge of Honaunau”;  it is the ancestral home of the Kamehameha dynasty. The Honaunau regards itself as sovereign under international law, as the successor government to the independent Kingdom of Hawai’i, not subject to U.S. law. The base camp is now a community of learning.  Activist professors have set up Pu’uhuluhulu University with 20 classes a day on Hawaiian culture and language.

KHON2 reported that the resolve of the Ku Kia’i Mauna, guardians of the mountain, grows stronger every day. The Star Advertiser has called the struggle a “boiling point.”

The TMT Corporation and the University of Hawai’i planned this $1.4 billion telescope and related facilities to be 18 stories high and that it will to cover the size of six football fields — far larger than previously opposed projects. Community resistance has blocked the massive project for years. Earlier projects left toxic waste and seepage onsite.

Mauna Kea is part of stolen crown lands. Queen Lili’uokalani of Hawai’i was overthrown in 1893 by a cabal of sugar planters and settler businessmen.  Two years later the U.S. annexed Hawai’i as a territory; it was made the 50th state in 1959.

Mauna Kea was targeted for development because it’s the tallest mountain in the Hawaiian chain, with a summit 13,803 feet above sea level, the highest point in Hawai’i. That makes the dry, mostly cloud-free skies there less affected by city light pollution. Most of the dormant volcano is underwater. When measured from its oceanic base, it’s the tallest mountain in the world, some 32,808 feet high. It is about a million years old and is the second largest in subaerial surface area of the five shield volcanoes on the Big Island. Meanwhile, the TMT corporation has an alternate site selected in the Canary Islands; La Palma, Spain, wants the project.

Mauna Kea is unique for its rare indigenous plants and animals.  It has deep significance to Hawaiians and all Pacific Islanders. National Geographic honored it in a special edition in January 2011, titled, “The Earth’s Holiest Places: Sacred Journeys.” It’s a sacred place for Kānaka Maoli and all Polynesian Nations.  It represents creation, the embodiment of ancestors, a burial ground. It is home to 100 archeological sites, hundreds of cultural sites, and historic and still-used shrines, three of which are directly endangered.

On the blockade’s first day, July 15, Protectors spent over 11 hours at the cattle guard on the access road. Kānaka Maoli Protector and professor at the University of Hawai’i, Noelani Goodyear-Kaʻōpua, stood arm-in-arm with other wahine (women) to protect the kūpuna (elders) from heavily armed officers. She said, “The kūpuna there had made a line and wanted to be a first line of defense.” (High Country News, July 25)

Goodyear-Kaʻōpua raised three grounds for opposition to TMT: Mauna Kea is sacred, it is the watershed for Hawai’i island’s fresh water supply, and it is a burial ground. It is unceded, unrelinquished, stolen Hawaiian land. Further, it is zoned for conservation to protect and preserve natural resources necessary for the survival of the people. The plan for the 30-meter telescope meets the definition of a “genocidal occupation.”

Protect the Earth, not profits!

There are online discussions of Native Hawaiians about the root of the problem being the construct of the U.S. judicial system in dealing with Indigenous issues — that it is rooted in colonizers’ views on spirituality which are restricted to organized, class-society-based religion. Indigenous peoples have deep connections with the land and relations with all forms of life. Such kinship doesn’t translate well in class society, which is intolerant of colonized peoples and regards them as “lesser than” or “uncivilized.”

Capitalist culture places no intrinsic value on Mother Earth, the biosphere and life on Earth, clean water and air, indigenous animals, plants and natural habitats.  Capitalists only value life for the profits they can make. Their values are therefore diametrically opposed to those of Indigenous peoples worldwide.

Significantly, nearly 1,000 astronomers have signed a letter,  as of July 28, opposing the imposition of this project on the Hawaiian people. They raised concerns about sovereignty and intrusions on Indigenous lands. The letter cites past environmental racism and “white colonizers’ obsessions with conquest.” (tinyurl.com/yxulf4lu)

Chanda Prescod-Weinstein, an astrophysicist at the University of New Hampshire, who signed the letter, stated, “What’s facilitated [scientific] access [to Mauna Kea] is American colonialism on kānaka ‘ōiwi land in what we call the state of Hawai’i. It is the American state apparatus that continues to play a role in enforcing astronomer access to the Mauna, for example, with the police forces this week arresting the kūpuna, the elders, who took great physical risk to protect their family.” (earther.gizmodo.com, July 18)

On July 19, students at the University of California, Berkeley demonstrated with visiting Pacific Islander students, Indigenous rights groups and elders to demand that the UC system divest from TMT, as well as other local investors. Principal investors in TMT are Gordon Moore, Silicon Valley venture capitalist, along with the California Institute of Technology.

TMT is a for-profit project. The state of Hawai’i and the University of Hawai’i have made millions of dollars from such projects. It’s racist to allege that the Kānaka Maoli oppose astronomy when Pacific Islanders have practiced astronomy for ages.  They navigated the Pacific Ocean by the stars.

Kānaka Maoli Bria Tennyson, a Berkeley student, answered the false claim that Native Hawaiians oppose science: “Our very identity as a people is based on studying the stars. That’s how we got to Hawaii (in the first place).”  Thousands marched in Waikiki, Hawai’i, on July 20. And on July 21, an organization of Asian-Pacific Islander gay and trans people demonstrated in New York’s Union Square.

Protests spread to the tourism industry: Organizers called for a one-day tourism boycott Monday, July 22, and several businesses cooperated and closed, cancelling tours and more. A majority of tourists understood.

Hawai’i Lt. Gov. Josh Green met with Kānaka Maoli on July 22, attempting a compromise. But he left speaking about the Hawaiian peoples’ visions of their own future. Some state representatives and city council members have asked Gov. Ige to rescind his emergency proclamation, stating it violates the spirit of the law.

Hilo County Council passed a resolution on July 24 in support of state Sen. Kai Kahele’s call for a 60-day moratorium on building TMT, despite Gov. Ike’s push for it to begin.

The following testimony and more was given to the council about decades of mistreatment of the Hawaiian people and their lands. Kamanawa Kinimaka, descended from the royal guard for King Kalakaua, said, “Our land is dying, and it’s not just in Hawai’i. What the Hawaiian represents is a symbol of the Indigenous Native people of our world. The Hawaiian people have been refined into a fine diamond of symbolism.” (West Hawaii Today, July 28)

In addition, Ikaika Marzo stated, “TMT is just a match after so many years of gasoline being poured on our ground.” Millicent Cummings called TMT “an act of war to the mauna and the kanaka.” And Robert Yamada stressed, “TMT is the catalyst. It’s the line in the sand. Do not cross that line.”

Actor Dwayne “The Rock” Johnson, who grew up on Oahu and is of Samoan heritage, met with kūpuna and organizers at the Mauna Kea Access Road on July 24. He said, “It’s beautiful, it’s inspiring. … It’s bigger than a telescope. It’s humanity. It’s a culture. It is a people, our people, our Polynesian people, who are willing to die here to protect our land.” (Hawaii News Now, July 24)

Marxists and Marcyists understand that this battle, along with the struggle in Puerto Rico, is part of the struggle against the legacy of settler-colonialism. It shows what we mean by support for self-determination. The Kānaka Maoli should decide about any development on their islands.

The Hawai’i Community Bail Fund for Protectors of the Mauna Kea is linked to  iacenter.org. Support the Kia‘i!