This group of workers has been organizing all over the country, with Local 1 leading protests and strike threats since 2016. What helped them win in Chicago was a 2017 City Council ordinance raising wages to $13.80 an hour and language that made it easier for workers to join unions. O’Hare workers’ high-profile allegation of wage theft totaling $1.2 million helped. (Chicago Sun Times, July 17)

This is a major breakthrough nationally for airport workers. May it ramp up the ongoing organizing struggle for these workers all around the U.S.! 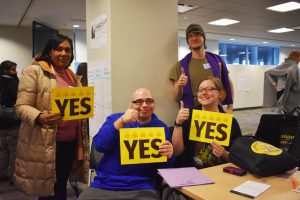 Nurses in 3 western states are on the move

When management of Kalispell Regional Health hospital in northwest Montana refused to recognize the nurses’ petition to the National Labor Relations Board to join SEIU1199NW in mid-June, the nurses opted for an election. With a July 12 vote of 372 to 199, the nurses won union representation. One of their aims is getting KRH to hire more nurses and end the staffing shortage. (SEIU1199nw.org, July 12)

Nurses represented by the Washington State Nurses Association at CHI Franciscan St. Joseph Medical Center in Takoma reached a tentative agreement after a 17-hour negotiating session into the early morning of July 13. The union called the deal a “major victory … that achieved gains in all three of our key priorities on wages, staffing and retro pay.” (thestand.org, July 15)

The National Domestic Workers Bill of Rights was introduced in Congress July 15 to finally establish rights for some of the most oppressed workers in the U.S. — domestic workers. These women, along with farmworkers, were not covered by the National Labor Relations Act of 1935, after Southern congressmen refused to vote for it unless white Southerners could continue Jim Crow oppression and abuse of Black housekeepers and sharecroppers.

This bill, fought for since 1968, will establish rules so the growing number of nannies, housecleaners and home care workers, who have had to endure low wages (about $10 an hour), unpredictable hours, lack of job security and sexual harassment, will have set wages, hours, overtime, protections and benefits like sick days, and job security. Live-in nannies will have signed contracts and must receive a written termination notice and at least 30 days of severance pay. Given the growth of the aging U.S. population, domestic work is predicted to be the fastest growing job in the next decade.

The National Domestic Workers Alliance, founded in 2007 and representing 2 million women — predominantly women of color from as far away as the Caribbean, Latin America, Asia and Africa — is the driving force behind the law. (New York Times, July 15) Its passage will right a racist, sexist wrong and become a small step toward long-overdue reparations.