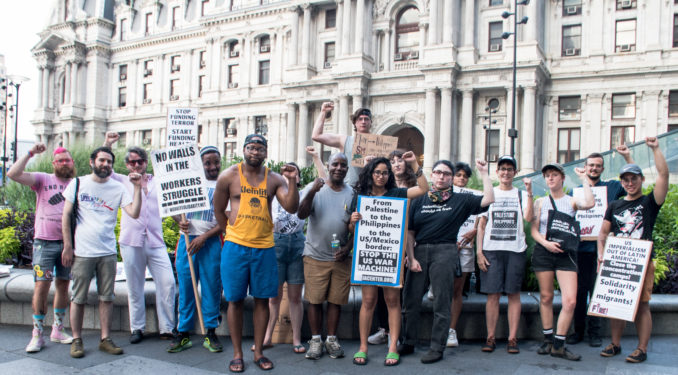 Dozens of people braved 99˚ weather to rally in front of Philadelphia’s City Hall on July 21. They gathered to demand “U.S. stop funding terror in the Philippines” and instead “Fund jobs, health care, housing and education, not imperialist wars.” Speakers included Cero Parel and Jeeva of BAYAN-USA, Nora K of  Jewish Voice for Peace Philadelphia and Mike Wilson of Workers World Party.

The demonstration was one of dozens of similar protests in the U.S. and around the world to condemn the U.S.-backed Duterte regime for its crimes against the Filipino people.

In a “United peoples state of the nation address,” BAYAN-USA charges: “The fascist Trump administration continues to fully support the Duterte regime ($193 million in 2018 alone), while it carries out a bloody drug war on the poor, martial law in Mindanao, and counter-insurgency war on the revolutionary movement in the Philippines. With more than 30,000 extrajudicial killings, 532 political prisoners, and at least 56 Philippine National Police officers involved in abusing women, the U.S.-Duterte regime continues its state repression and terror against the people. The U.S.-Duterte regime is guilty of daily gross human rights violations.”

Speakers joined BAYAN-USA in demanding “Stop U.S. intervention in the Philippines and all across the globe.” The protest was endorsed by BAYAN-USA, Food Not Bombs-Solidarity, FIRE, International Action Center, Jewish Voice for Peace Philadelphia, Philadelphia Camden Comite Boricua and Workers World Party.