Several dozen concerned community members attended the Euclid City Council meeting on June 17 to protest the recent racist conduct of Euclid police. Euclid is a suburb that borders the East Side of Cleveland, where the city’s African-American community has historically been concentrated. The suburb’s Black population has grown in recent decades to 60 percent. 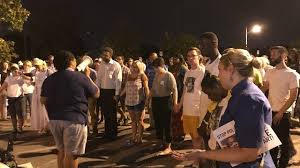 On June 12 the police used pepper spray and pepper-ball guns on hundreds of Black teenagers waiting to get into a roller-skating rink. The city then filed a nuisance complaint against Black-owned Mig’s Pla-Mor, with the intention of closing it down.

Pla-Mor was originally the name of what was once the only Black-owned skating rink in Cleveland, operating from the 1940s to the 1960s.

Owner Miguel Sanders, who bought the rink a little less than a year ago, explained to the news media the circumstances leading up to the incident. He was told by the city that he would have to apply for a permit to hold a youth-oriented, “end-of-school-year” skating party, although the previous owner had never needed a permit for special events. Sanders paid the permit application fee and arranged to hire two required Euclid police officers.

The two cops did not show up at 9 p.m., the scheduled start of the party. Around 9:30 a team of officers, in riot gear and armed with rifles, appeared.

Police “went in looking like a militant group with rifles on their back,” according to Sanders. “Euclid police, along with the fire department, basically stormed into the building like a SWAT unit.” (WKYC, June 13)

About 250 youths had already been admitted, based on the number of wristbands that had been distributed, and hundreds more were lined up outside. The building’s legal capacity is 440.

After supposedly doing a head count inside, police announced to the teenagers outside that only 100 of them would be allowed in. At this point some individuals in line began pushing and shoving one another. Police ordered the crowd to disperse.

The problem was that most of the young people, who were below driving age, had been dropped off and had no way to leave and nowhere to go. When the youth did not immediately disperse, cops fired pepper spray and pepper balls. A pepper-ball gun resembles a paintball gun but fires pellets that break apart on contact, exposing victims to a powder that burns like pepper spray.

“Now, I got all these kids spitting up, throwing up, coughing and eyes watering,” said Sanders told WKYC. “It was frightful to me, let alone we are talking about 13-, 14-, 15-year-old kids.” (WKYC June 13) Sanders is now being scapegoated for what police are wrongly calling “the riot.”

The public comment period at the June 17 City Council meeting lasted more than two hours as city residents, skaters, relatives of the young victims and others spoke out about the specific incident and against racism in Euclid. Witnesses described being harassed, intimidated with guns and shoved by police.

Skaters of all generations spoke against closing the rink. Young men explained how skating has given them a positive outlet and an alternative to running the streets.

One speaker pointed out that Euclid’s police department is more than 95 percent white and the fire department is all white. The entire city administration, with the exception of City Councilmember Brian T. Moore, is white.

The Pla-Mor incident is by no means unusual. In 2017 Euclid police killed 23-year-old Luke Stewart and later called the SWAT unit on protesters who packed a City Council meeting in response to the killing. Last year an inmate died in Euclid’s county-run jail.

Officer Michael Amiott, fired for the 2017 beating of a Black man during a traffic stop, was rehired a year later after an arbitrator ruled in his favor. Amiott had a previous history of violence and lying under oath. Additional beatings and Taser assaults by Euclid police are the subjects of multiple lawsuits.

A speaker at the council meeting described watching an unrestrained police dog bite an African-American man on the buttocks.

Speaker after speaker called on the city to cancel plans to close Pla-Mor. Among the final speakers were Miguel Sanders and his son, who also works at the rink. The younger Sanders wiped away tears as he described the impact that Pla-Mor’s closing would have on the family and the community.

The outrage expressed at the City Council indicates that the movement against racism is growing, in Euclid and throughout Greater Cleveland.