The four-part Netflix series “When They See Us,” directed by  African-American director Ava DuVernay, has set off an avalanche of long overdue repercussions for the high-profile prosecutors who in 1989 framed up five African-American and Latinx youth in New York City. Known as the Central Park Five, the teenagers were arrested, prosecuted and sentenced as guilty for the sexual assault of a white woman, Trisha Meili, referred to in the press as the “Central Park jogger.” 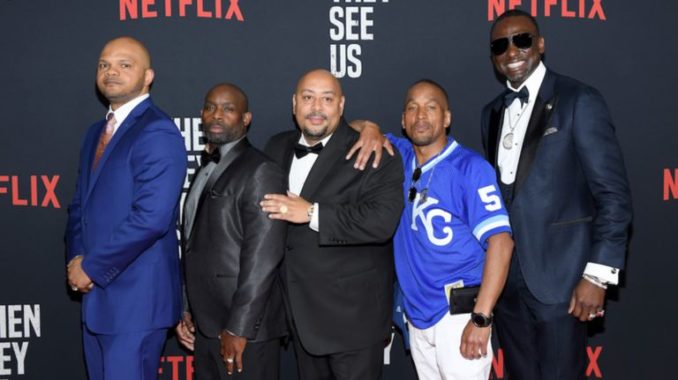 The Central Park Five, from left to right, Kevin Richardson, Antron McCray, Raymond Santana Jr., Korey Wise and Yusef Salaam, attend the premiere of “When They See Us” at the Apollo Theater in Harlem, N.Y., on May 20.

The case garnered both national and international attention due to the extreme racist demonization of these youth, now in their 40s, by the New York Police Department, the courts and the mainstream media.  Donald Trump, a publicity-seeking New York real estate developer, actually called for the death penalty for these youth, and to this day has refused to publicly apologize to the Five.

The Five spent seven to 13 years of their life in prison until they were exonerated in 2002, when Matias Reyes, already in prison, confessed to the rape, and his DNA matched evidence from the victim.

The DuVernay series details how the New York police coerced false confessions from the youths with physical and psychological torture, and then railroaded Antron McCray, Kevin Richardson, Yusef Salam, Raymond Santana, and Corey Wise to jail for the attack. The series also dramatizes the emotional toll of the racist media frenzy and frame-up.

In the aftermath of the series exposé, Linda Fairstein, who in 1989 was head of the Sex Crimes Prosecution Unit in the Manhattan District Attorney’s Office, has lost the publisher of her crime novels, Dutton, as well as her agent, ICM Publishing.

She has also resigned from the boards of Vassar College and Safe Horizon, a victims’ resource group.

Elizabeth Lederer, lead prosecutor in the case, has resigned from her job as a lecturer at Columbia Law School. That action was called for by the school’s Black Students Organization, whose online petition received over 11,000 signatures as of this writing.

That petition also calls for Columbia to revoke Fairstein’s Award of Excellence, made by the university’s School of Medicine.

On Twitter there is a popular hashtag called #cancelLindaFairstein.

‘When They See Us’ shines light on repression

Other demands prompted by DuVernay’s series include reopening all cases handled by Lederer and Fairstein between 1976 and 2002. Called for by New York legal defense groups and the city’s Public Advocate Jumaane Williams, these forces also call for the Manhattan DA to fire Lederer, who still serves as an assistant DA and is called “an attorney in good standing” by Manhattan DA Cyrus Vance.

Raymond Santana, one of the five, has also called for the release of unredacted depositions, which would show the extent of the police lying and coercion.

It took DuVernay’s powerful dramatization of the NYPD’s racist coercion tactics to accomplish what many voices had been urging for years. After the excellent Sarah Burns’ documentary, “The Central Park Five,” came out in 2012, the Columbia Black Law Students Association circulated a petition calling for Lederer’s removal.

However, in a June 11 letter, the association stated that in 2013: “Instead of taking decisive action to address the issue, Columbia Law School simply removed the Central Park jogger case from Lederer’s online bio.”

The confession by Reyes in 2002 should have been a career-ending moment for legions of New York power players — not only prosecutors, but also cops and media forces — whose racist tag-team recalled the railroading of the Scottsboro 9 during the 1930s and the lynching of 14-year-old Emmet Till in 1955.

But no. After that, Fairstein went on to a lucrative career writing New York Times-bestselling crime novels.

The difference this time around is that DuVernay’s series has struck a chord with the masses. It has been seen worldwide by millions of people. “When They See Us” is Netflix’s most-viewed show every day since it premiered on May 31. In Britain, it’s the online channel’s second-most-watched show.

While the falsely accused Five received a $41 million settlement, which can never give back their youth, the city of New York has never apologized or acknowledged wrongdoing.

For her part, Fairstein is doubling down, using the Wall Street Journal to attack DuVernay’s film. She claims it’s “so full of distortions and falsehoods as to be an outright fabrication.” (Washington Post, June 11)

Because the testimony by the Five was coerced, it was so inconsistent it was branded inadmissible by Manhattan District Attorney Cyrus Vance when the charges were vacated in 2002. Yet Fairstein not only relies on that coerced testimony; she resurrects the old prosecution theory that there was another assailant, not Reyes — whom none of the framed-up youth ever mentioned in the “testimony” she relies on!

Amazingly, Fairstein claims she supports the 2002 vacation of charges, but resurrects the old racist NYPD argument that even if they didn’t commit the crime that Reyes did, they were still up to no good.

At this point, the strongest role being played by any apologist for the conviction of the Five is to cover up for the current crimes of the NYPD and all police. Fairstein and others join the ranks of NYPD lawyer Stuart London, who on June 13 claimed Eric Garner died not from Daniel Pantaleo’s chokehold, which the whole world witnessed, but because of his plus size.

Both the gangster-style gunning down of Brandon Webber in Memphis, Tenn., on June 12 and the violent racist police assault on May 27 of a young Black family after their 4-year-old left a Family Dollar store in Phoenix with a 99-cent doll — are the kinds of events that NYPD spokespeople are defending. They strengthen the chord that DuVernay’s series has struck.