The multistory Atlanta City Detention Center was built prior to the 1996 Olympics to house the hundreds of poor and homeless people that the image-conscious corporate elite were determined to banish from the sight of  a global audience.

At that time the City Council passed a series of “quality of life” laws guaranteed to ensnare poor people, and Black youth and men in particular, into days or even months in the jail. For the next two decades, the 1,700-bed facility was filled with those too poor to pay the cash bond levied for traffic tickets and violations of city ordinances like loitering or public intoxication. 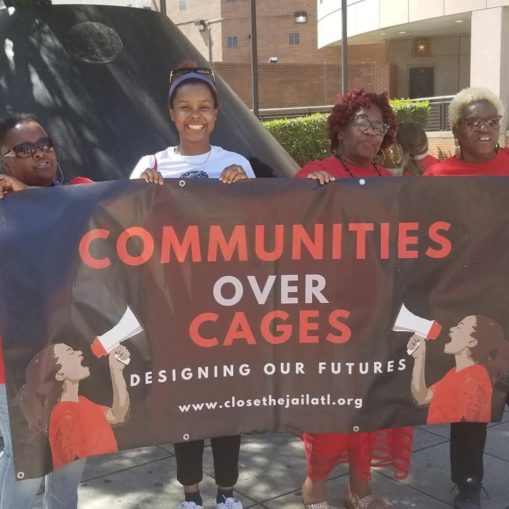 Caption: Women on the Rise is one of many prisoner rights and community activists groups who “fought to win” in closing the Atlanta jail.

The detention center deserved to be called a “concentration camp for the poor,” with its notorious record of medical neglect, physical brutality and unsafe conditions.

On May 28, the hated ACDC was officially closed. Atlanta Mayor Keisha Lance Bottoms signed the City Council’s legislation and ordered the establishment of a community task force to repurpose the building for the benefit of city residents.

A victory for prisoner activists

The struggle to achieve the shutting down of the ACDC involved years of effort by multiple groups that built campaigns to steadily reduce the incarcerated population.

A pre-arrest diversion program was won with leadership from the Solutions Not Punishment Collaboration and the Racial Justice Center. That success was followed by reforms in cash bail and marijuana policies, which again kept large numbers of people out of jail.

Immigrant rights groups such as Georgia Detention Watch and Georgia Latino Alliance for Human Rights zeroed in on the city’s arrangement with Immigrant and Customs Enforcement to house undocumented im/migrants in advance of deportation at ACDC. In response to outrage at the Trump administration’s family separation policy, the city ended the ICE contract, reducing the jail population by hundreds.

Before its closing, the operating costs of the jail amounted to about $33 million a year, with only about 150 or fewer men and women locked up on a daily basis. Popular pressure from Women on the Rise, a organization of formerly incarcerated women, along with scores of other community groups, ultimately achieved the jail closure as a step in changing the racist, anti-poor, working-class-based system of incarceration.

When some called for diverting the $33 million jail budget to the police department, activists made clear that their demand was instead to fund services to uplift and repair the communities whose members had been targeted by overpolicing, institutionalized racism and white supremacy.

Working with architects and city planners, the “communities not cages” advocates already have design drawings of how the jail could be rehabilitated to a “one-stop shop” for a broad range of services, including health care, job training and community empowerment.

The detention center sits on a large piece of valuable land in an area of Atlanta undergoing gentrification. Undoubtedly, profit-minded developers will be pushing their own agenda. But the determined activists, especially those who have personal experience with the crimes of mass incarceration, will be going into the next battle confident that “When We Fight, We Win!”

The same day the city announced the ACDC closing, the city also announced that Atlanta police would no longer participate in certain federal task forces.

The recent killing of Jimmy Atcheson and, prior to that, the killing of Jamarion Robinson by FBI-led squads, saw family members and Black Lives Matter activists challenge the “official” stories. No body-camera video is allowed on federally organized task forces. Moreover, federal agents involved have not been made available for questioning by the Fulton County District Attorney.

Atcheson was unarmed and hiding in a closet when he was killed by an Atlanta cop in an FBI-led squad. Seventy-six bullets fired at Robinson tore his body apart.

While the city of Atlanta ordered its police to deploy body cameras during all interactions with the public, that still has not reduced the number of officer-involved shootings in 2019.

Videos from bystanders, however, have produced charges against police.