MOVE 9 members Janet Holloway Africa and Janine Phillips Africa, who were recently released after spending nearly 41 years in prison, held a historic press conference in Philadelphia on May 30. They were joined by MOVE members Consuwella Dotson Africa, Carlos Africa and Sue Levino Africa who all served shorter terms following the police assault on their home on Aug. 8, 1978. 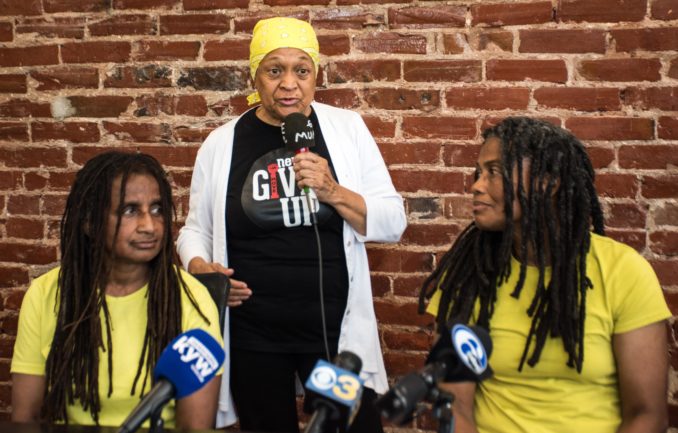 Pam Africa, minister of confrontation for the MOVE organization, chaired the impressive panel.  Ramona Africa, the sole survivor of the state’s bombing of the second MOVE home on May 13, 1985, made her first public appearance following a prolonged, debilitating illness.  Celebration of her birthday will be held here on June 8.

The press conference marked the first time in over 40 years that several of the MOVE members involved in the 1978 confrontation with Philadelphia police appeared together in public. MOVE 9 members Debbie Sims Africa and Michael Davis Africa Sr., released in 2018, were unable to attend because of arbitrary parole restrictions that prevent them from being with other MOVE members.

The event was held at the storefront office of the Philadelphia Student Union.  The director, Julien Terrell, welcomed the elder freedom fighters as important examples for students currently involved in education and social justice struggles.

Janine Africa and Janet Africa opened the press conference by urging people to continue the fight to release the three remaining MOVE 9 members.  Edward Goodman Africa was granted parole on April 1, but has yet to be released. Chuck Sims Africa and Delbert Orr Africa are still being denied parole.

Janine Africa stated: “Delbert has always been singled out since police badly beat him following the 1978 confrontation.  His most recent appeal for parole was to be heard after six months, but it’s now eight months with no response. If this government had its way, we would still be in jail.  They planned for us to die there. But we won’t celebrate until we bring our brothers home.” MOVE 9 members Merle Austin Africa and Phil Africa died in prison.

Both women stressed how important their MOVE family and beliefs in the writings of MOVE founder John Africa were in helping them survive decades of imprisonment, including three years in solitary confinement. Ramona Africa — imprisoned for seven years following the deadly Philadelphia police bombing of the MOVE house on May 13 1985 — echoed these sentiments. “This system has worked hard to break us up,” Ramona said. “They tried to get me, Consuwella, Carlos and Sue to agree to the stipulation that if we did not associate with MOVE we could come out earlier, but none of us agreed to compromise.”

The women described the brutal conditions they were subjected to in SCI Muncy women’s prison following their arrests in 1978.  They were initially put into “the hole” — solitary confinement -– and told by then Head of Security Edward Bennett that they would remain there for the duration of their 30- to 100-year sentences.

“A large guard punched me in the chest and knocked me across the cell,” Janet Africa, when describing conditions. “They took our clothes, didn’t feed us, kept the lights on 24/7 and kept us in the hole for three years.”

“They thought they could break us.  They don’t see women as strong, but they were wrong,” said Sue Levino Africa. “We did 50 days of a hunger strike, exercising throughout and going without even water the last few days.  They even sent me to a men’s prison to try to stop us, but we ended up breaking Ed Bennett’s back.”

Carlos Africa described how in December 1981, he and MOVE 9 men were attacked by prison guards who used water hoses, night sticks, ice picks and even baseball bats:  “We survived the beatings. We fought because they had attacked our sisters at the women’s house of corrections.”

Both women maintain their innocence in the death of Philadelphia Police Officer James Ramp. He was shot in the back of the head by “friendly fire.”  Ramona Africa stated that when Ed Bennett saw her in the yard at Muncy before her release, he said, “We know you all didn’t kill that cop.”

All the MOVE speakers recounted the painful impact of learning about the brutal deaths of 11 family members, including some of their own children, while in prison, when police bombed the MOVE house in May, 1985.

An audio statement from political prisoner Mumia Abu-Jamal, welcoming the women’s release, was played. Janine Africa stated: “Mumia is imprisoned because of his stance in support of MOVE.  He spoke the truth. One of the last things he did before police shot him was to call into a radio show to challenge Judge Edward Malmed who convicted us. Mumia told him, ‘You sent nine people to jail, but you admit you don’t know who killed Ramp.’ ”

When asked to compare the political climate in the 1970s to today, both women responded that things are worse now than when they were imprisoned.  Janine Africa noted: “Forty years ago there was no progress, no freedom of speech -– unless you said what they wanted -– but the system was more diplomatic and covered things up.  They aren’t covering it up any more. Police shoot people in the streets and nothing is done.”

Janet Africa added: “The system has degenerated, but there is a lot of technology now so that we can see things happen in the open.  Yet even with all these cameras, all these pictures, all these situations with brothers and sisters being shot down in cold blood by cops, they still try to tell us that didn’t happen.”

“The political climate is bad, but don’t be discouraged,” concluded Janine Africa. “The power of the people is a mighty force.  It’s what got Mumia off death row and it’s what got us here today.”