U.S. Air Force veteran Daniel Hale was arrested May 9 in Nashville, Tenn., and charged under the Espionage Act for leaking documents that expose the U.S. drone warfare program and crimes the Trump and previous administrations have committed in Afghanistan, Somalia and Yemen. 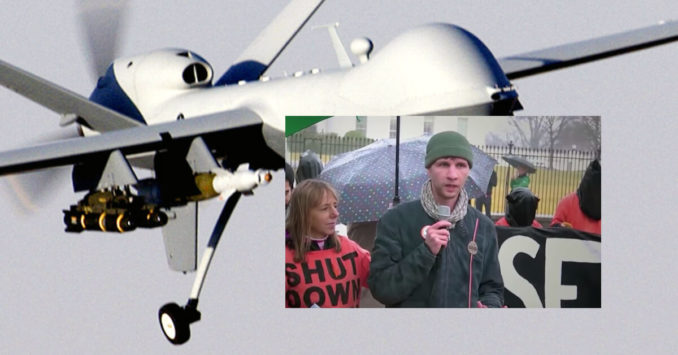 Like so many working-class youth, Hale joined the USAF “out of desperation, because I was homeless.” (Washington Post, May 9)

Hale served during 2009-13 and was assigned to work at the NSA. During 2012 he was stationed at Bagram Airfield, Afghanistan, where he was responsible for identifying, tracking and targeting drone attacks.  After he was discharged, he worked as a defense contractor intelligence analyst at Leidos and was assigned to the NGA, a pattern typical of how the MIC web works.

According to his indictment, Hale, a member of About Face (previously Iraq Veterans Against the War), is charged with providing “Secret and Top Secret” documents to a reporter and an “online news outlet.”  The documents concern the drone warfare program and so-called counterterrorism operations.

Daniel Hale faces 50 years imprisonment for revealing that drone warfare not only kills a “target” but anybody nearby. He exposed the “kill chain” — when “intelligence specialists” like himself sit thousands of miles from battle as they analyze live drone video; communicate in instant-message chat with jet fighter pilots, operators of armed Predator and Reaper drones, and ground troops; and pass along secret “kill” orders from higher-ups who authorize assassinations.

Like Chelsea Manning, Edward Snowden and other military veterans who testified at the Winter Soldier hearings on Vietnam (1967) and Iraq (2008), Hale spent years deep inside the MIC and was driven to expose what he took part in and what he saw.

Support Daniel Hale. He is guilty of nothing.

The writer is a member of Veterans For Peace.