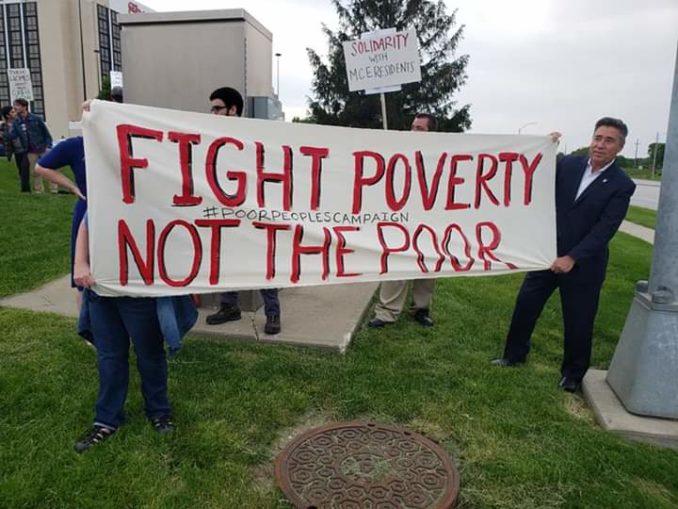 Since taking over these properties, Havenpark has imposed extravagant rent hikes on tenants as part of their greedy business model. For example, MCE residents received a predatory rent increase of nearly 70 percent.

After months of dragging their heels, Havenpark finally agreed to meet with MCE residents at the Sheraton Hotel that Thursday evening. The meeting was closed to the public and the media, which should not come as a surprise as the firm has continuously denied interviews and comments on their actions.

Before MCE tenants met with representatives inside the hotel, a crowd of around 30 people gathered outside near the street. They held signs and displayed a large banner reading, “Fight poverty, not the poor.”

The main rally speaker was Waukee resident Matt Chapman, who has been helping to organize MCE tenants for months against Havenpark. Wearing a red T-shirt with the words “Housing Justice for All,” Chapman addressed the crowd.

Chapman said Iowans should not be forced “to choose between food, rent, utilities and medicines” for the sake of “out-of-state profits.”

Chapman pointed out, “These folks have been living in Waukee for years, yet we allow an out-of-state corporation to gouge their rents. Predatory companies across the country use the same method to steal homes from communities like ours, by raising rents so folks walk away. That ain’t right.”

Protesters loudly echoed back in agreement, “That ain’t right!” During the rally, several drivers passing by honked their horns in support. Local news outlets reported the event.

That same evening in North Liberty, residents of Golfview (who had their rent raised 58 percent) met with Havenpark. The town hall meeting that evening was the first time Golfview residents were able to confront Havenpark. The Golfview Residents Association also hosted a rally.

Following the meetings in West Des Moines and North Liberty, Havenpark agreed to “stagger” the proposed rent increases over the next 10 months, according to the Des Moines Register.

Golfview resident Jean Parker told Iowa City Press-Citizen, “I think  [Havenpark] got embarrassed. They thought they could hide behind corporate walls over in Utah, but the Teamsters [Local 238] went out and found them.” Local 238 and TeamCAN are among the allies of GRA.

Many Iowa residents in the communities affected by Havenpark hope to link arms with each other in solidarity in the near future so they can work together to fight the profit-driven abuses of their landlords.

“Havenpark Capital is on notice that Iowa won’t tolerate that in our state,” stated Chapman.