The fight for accessibility in New York’s public transportation system is approaching a critical milestone on June 5. That’s when New York State Supreme Court Judge Hagler will make a fateful decision on the lawsuit to mandate elevators in the subway. 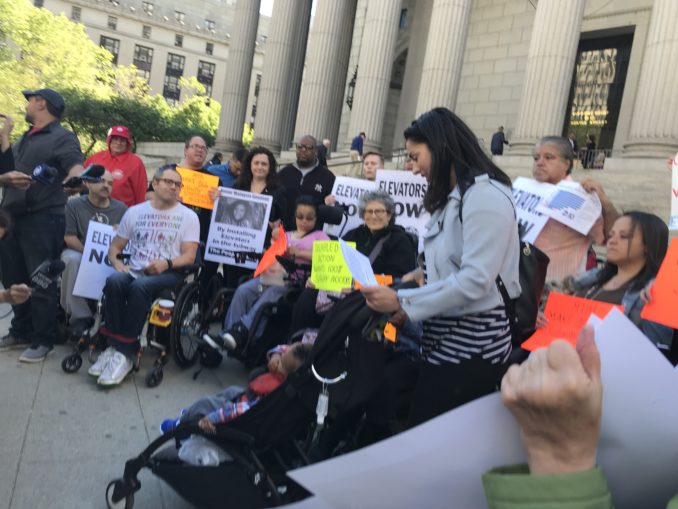 Christine Serdjenian-Yearwood addresses the courthouse rally before the hearing on the lawsuit mandating elevators in the New York CIty subway, where 50 people packed the court May 21.

Supporters of this popular demand are being asked to once again pack the court that day, just two weeks after 50 people packed the same judge’s court on May 21 for the same lawsuit. Wheelchair users turned out en masse, lining one entire side of the court, and supporters spilled into the aisles of the courtroom.

The judge opened the hearing by calling attention to the turnout. When he later referred to the supporters, the attorney for the Metropolitan Transportation Authority actually requested the judge not consider their presence in rendering the decision on the case. Judge Hagler then castigated the MTA attorney by asking him, “Can you imagine what some of the audience had to do to get here today?”

‘Accessible subways are a right’

The lawyers for the hated MTA knew that the 50 people now packing the courtroom had rallied outside before the hearing and had done so before a row of cameras and microphones of virtually every local TV and radio news show in New York. The support for what should be a basic right — accessible subways — exists alongside the heartfelt solidarity that went out to the family of Malaysia Goodson, the African-American mother who in January fell to her death down the subway stairs while carrying her baby and a stroller in a station with no elevators.

Leaders in the accessibility-rights struggle, almost all of them wheelchair users, led the sidewalk rally before the hearing. Sasha Goldensohn-Blair of Rise & Resist’s Elevator Action Group and Mary Kaessinger of The People’s MTA co-chaired the rally. Others addressing the ally included Valerie Joseph for the Brooklyn Center for Independence of the Disabled; Monica Bartley of the Center for Independence of the Disabled New York; Jean Ryan and Robert Acevedo of Disabled In Action; and Michael Schweinberg, president of Local 504 Club. Terrea Mitchell, a sight-impaired rider, spoke for the People’s Power Assembly.

What was once a demand made almost exclusively by the disability rights community is now being embraced by more sectors of the working class who ride the subway every day. Older riders, parents with strollers and anyone carrying something heavy need elevators, too. One of the rally speakers was Christine Serdjenian-Yearwood from the parents group UP-STAND, who addressed the rally with her baby and stroller.

The trade union movement was there as well. Eddie Yood, chair of the Communication Workers of America Local 1180’s Committee on People with Disabilities, told the protesters: “As public sector NYC administrative workers, we say that is not acceptable in the great city of New York for less than 20 percent of New York subway system stations and lines to have elevators.”

Media coverage of the day’s rally and the judge’s remarks was extensive and overwhelmingly favorable to the demand for accessibility. The Gothamist’s headline was “Judge Tells MTA to Find Money for More Subway Elevators: ‘You Find It for Other Things.’” AM New York, a free commuter paper handed out in the subway, ran the headline: “Judge blasts MTA’s accessibility record.”

The MTA is also facing a rebellion by riders who use Access-A-Ride, New York’s paratransit system. On May 20, the day before the hearing, wheelchair users packed the MTA’s monthly Bus and Subway meeting to protest the rapid deterioration of that service. They chanted, “Bring back E-hail!” and held signs with the same demand.

The MTA recently cancelled the rollout of its pilot program E-hail, which ever so briefly improved paratransit service. That threw riders back into the chaos of Access-A-Ride, a system where riders are constantly either denied service or forced to take hours-long trips after being paired with riders going other places.

Amazingly, MTA President Andy Byford recently called Access-A-Ride “really a success story,” claiming that its on-time performance for February pickups was 98 percent. The MTA’s ridiculous standard for “on time” means that a pickup occurred within a half-hour of the scheduled time.

The MTA can’t deliver, either on Access-A-Ride or with elevators, because of its $40 billion debt burden. It pays the billionaires on Wall Street — the ones who were bailed out with trillions of dollars — so much money that it doesn’t have enough left over to actually run the subway. The New York Times stated it clearly in December 2017: “By law, in a competition for budget money, debt service always comes in first. … To repay the loans, money has been siphoned from service and maintenance.”

The Wall-Street-controlled MTA deflects the mass anger it brings on itself through its connections with the police, politicians and media. It’s launched a public campaign blaming “farebeaters” for hurting public transportation, complete with an increased number of police in the subway. The New York Police Department refuses to release any information on who is being targeted for summons or arrest because that would show racist profiling.

With the help of Gov. Andrew Cuomo, the MTA has also launched a media campaign falsely accusing transit workers of “stealing” from public transportation with excessive overtime. In addition to the media blitz, the MTA actually sent armed police to worksites to “monitor overtime.”

As the New York State AFL-CIO pointed out: “In fact, it was MTA Management who specifically bargained for elimination of the overtime caps in the collective bargaining agreements for NYC Transit workers in the interests of avoiding the pension and health costs of full-time workers.”

The amount they’re complaining about for one particular worker, who supposedly got $344,000 overtime in one year, pales in comparison to the $7 million the MTA pays to banks every day.

Even the amount the MTA claims is lost to people who skip the fare — $215 million a year — is drastically less than what the transit agency pays the banks every year: $2.6 billion.

In the same week as the May 21 rally, the MTA released two reports, covered dutifully by the corporate media, claiming improved subway service. On May 20, the city cable news channel NY1 ran the headline “Dramatic Turnaround of the 7 Line.” Members of the Facebook group “7 Train Blues” had a good laugh over that.

With all the various ways the MTA has of deflecting attention and outrage, the headlines that police caught someone who had been pulling the emergency brake on the subway should be viewed with extreme caution. Police, having arrested a 23-year-old African-American rider, accused him of the act.

All the quotes attributed to him have come from unnamed police sources. The headlines and first paragraph of the New York Daily News story about his arrest said he was smirking — but the paper’s two separate photos didn’t show that. The NYPD’s famous railroading of the Central Park Five, a group of innocent Black and Latinx youth, should be kept firmly in mind as this story unfolds.

In court, the MTA lawyer begged the judge to ignore the packed court of people with just demands. Like the capitalist system as a whole, in order to keep the rich richer, the only response the MTA can give to those demands are lies, attacks on workers and more racism.