MOVE 9 members Janet Holloway Africa, 68, and Janine Phillips Africa, 63, were freed on parole May 25, after over 40 years of incarceration. That  included a decade of consistently being denied parole petitions by the Pennsylvania Department of Corrections. 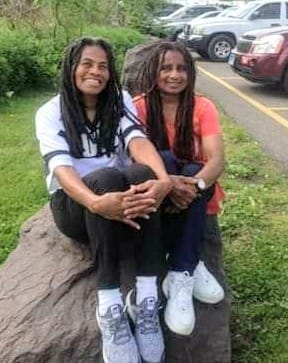 Janine (left) and Janet Africa upon their release.

While two other MOVE 9 members, Debbie Sims Africa and Michael Africa Sr., were released in 2018, parole for the two women was arbitrarily denied despite their impeccable disciplinary records and history of mentorship and community service while in prison at SCI Cambridge Springs.

In 2018, attorneys from the Abolitionist Law Center and People’s Law Office filed federal petitions for habeas corpus challenging the parole denials on the grounds of the lack of any evidence that the women presented a risk to public safety.

With May 28 set for a court date on that litigation, the Pennsylvania Board of Probation and Parole granted Janet and Janine parole May 14, one day after the anniversary of the notorious May 13, 1985, bombing of the MOVE home.

In a press release issued May 25, attorney Brad Thomson of the People’s Law Office said, “The release of Janet and Janine is a victory not only for them and their loved ones, but also for the MOVE Organization and the movement to free all political prisoners. Janet and Janine were excellent candidates for parole. They have been described by DOC staff as model prisoners and neither of them has had a single disciplinary incident in over twenty years. While in prison, they have participated in community fundraisers and social programs, including training service dogs. They are remarkable women who deserve to be free.”

A Philadelphia-based Black Liberation organization, MOVE was founded by John Africa in 1972. The group maintained the mantle against police brutality and environmental destruction after all-out state campaigns decimated the ranks of the Black Panther Party and other liberation groups.

MOVE soon became a frequent target of Philadelphia’s notoriously brutal police force. In 1976, police came to the MOVE house and scuffled with group members. During the incident Janine, who was holding her three-week-old baby, Life, was knocked over. Life was trampled by police who shattered his skull. He died later that day.

In May 1977 police obtained a court order requiring MOVE to vacate their Powelton Village home. What followed was a tense, 15-month siege of the surrounding neighborhood, which included shutting off water to the house and preventing food or aid to be sent to the family. Throughout the ordeal, neighbors stepped up to support the family.

When the family still refused to leave their home, on Aug. 8, 1978, police launched an early morning raid, using thousands of rounds of munitions, water cannons and tear gas to destroy the compound and drive the family out.

During the raid, Police Officer James P. Ramp was killed by a shot to the back of the head. While MOVE members maintain they did not fire any shots, nine were convicted of third-degree murder and conspiracy, even though no evidence linked any of them to the shooting. In fact, by immediately razing the entire property, police destroyed any potential evidence that would have helped the MOVE 9 prove their innocence. Police made no efforts to preserve the crime scene or measure for ballistic angles.

Five men and four women MOVE members were given 30-to-100-year sentences. They came to be known as the MOVE 9.

Nearly seven years later, police attacked another MOVE home on Osage Avenue in West Philadelphia on May 13, 1985. They dropped a bomb that destroyed 62 houses on the block and killed 11 MOVE members, including five children. Both Janet and Janine Africa, imprisoned at the time, had young children in the compound who were murdered by the infamous police assault.

Ramona Africa, the only living survivor of the May 13 massacre, was imprisoned for seven years. However, no city officials or police were ever criminally charged in connection with the May 13 murders.

In earlier correspondence with The Guardian, Janine Africa wrote, “There are times when I think about Life and my son Phil, but I don’t keep those thoughts in my mind long because they hurt. The murder of my children, my family, will always affect me, but not in a bad way. When I think about what this system has done to me and my family, it makes me even more committed to my belief.” (May 25, 2019)

While neither woman made a public statement after their release, they did send a thank you message to their U.S. and international supporters. It read in part: “The lawyers were sent to do a job and they did it! It is duly noted!  But we cannot minimize the will of the people, which John Africa said is ‘a powerful force.’ All power to the people who pushed aside their personal concerns and safety to fight for MOVE’s Freedom.”

Three other MOVE 9 members Delbert Orr Africa, Charles Sims Africa and Edward Goodman Africa remain incarcerated. Merle Africa and Phil Africa died in custody. Find out more about the Move 9 and their fight for freedom at onamove.com and move9parole.blogspot.com.