President Donald Trump took his war on the rights of women and gender-nonconforming people to the U.N. the week of April 22. It’s bitterly ironic that the Trump administration threatened to veto the U.N. resolution on ending sexual violence during wars and hostile conflicts if the U.N. did not go along with its anti-women, anti-gender-oppressed agenda. 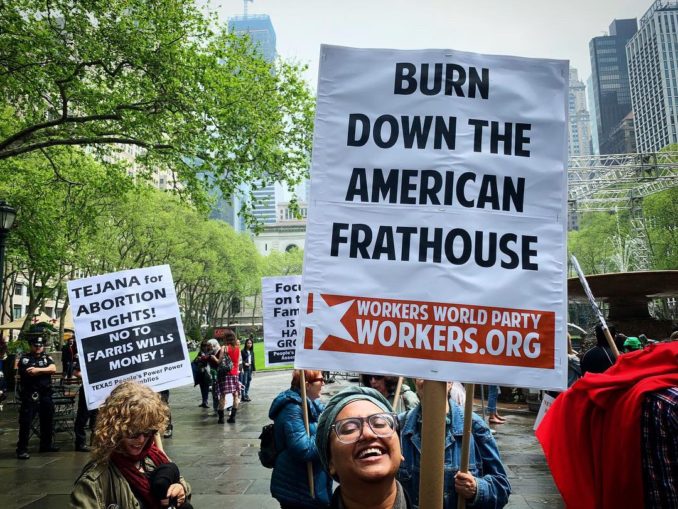 Reproductive rights protesters chant, “Get up! Get down! New York is a pro-choice town” on May 4.

The initial draft of the resolution read: “United Nations entities and donors to provide non-discriminatory and comprehensive health services, including sexual and reproductive health, psychosocial, legal and livelihood support and other multi-sectoral services for survivors of sexual violence, taking into account the specific needs of persons with disabilities.”

The Trump administration demanded that the phrase “sexual and reproductive health” be deleted because it could be interpreted as supporting the right to abortion. Even after the German representative who introduced the resolution agreed to take out that phrase, the U.S. then objected to the original phrase, “comprehensive health services,” in the original 2008 resolution.

After all reference to health care was deleted from the final resolution — as well as “comprehensive sexuality education,” which would protect the rights of gay, transgender and gender nonconforming people — it was passed by a vote of 13 members of the Security Council, including the U.S., no votes against, with Russia and China abstaining.

But there was immediate worldwide push back. Not only did representatives of Germany, Belgium, Britain and France speak forcefully against U.S. bullying, but so did many representatives of the 90 countries participating in the meeting. Calling the U.S. position “intolerable and incomprehensible,” France’s U.N. Ambassador Francois Delattre stated, “Women and girls who suffered from sexual violence in conflict, and who obviously didn’t choose to become pregnant, should have the right to terminate their pregnancy.”

In addition to diplomats, other prominent people spoke out against the U.S. policy, including German Foreign Minister Heiko Mass and actor Angelina Jolie in an April 22 Washington Post op-ed.

The two people awarded the 2018 Nobel Peace Prize, Nadia Murad, a survivor of the Islamic State group’s enslavement of Yazidi women and girls in Iraq, and Denis Mukwege, a Congolese gynecologist, issued a statement: “There is simply no excuse for continuing to fail those who have already been victimized, as well as those who continue to be at risk of devastating levels of sexual violence in conflict.”

Although the aim of the resolution was to end “the heinous, barbaric and all-too-often silent phenomenon of sexual violence during conflict” and adopt a survivor-centric approach, all references to expanding U.N. monitoring to track violations of the resolution were expunged from the final text. Russia, China and the U.S. opposed such language.

English barrister Amal Clooney urged the Security Council to prosecute members of the Islamic State group for war crimes, just as high-level officials in the Nazi party were prosecuted after World War II. “This is your Nuremberg moment,” she stressed.

The National Organization for Women issued a strong statement on April 23 reminding readers of Trump’s first act in 2017: reinstating the so-called “global gag rule,” which bars all federal funding for international organizations that provide abortion counseling — even if they also provide nutrition and hygiene; treatment for malaria, tuberculosis and tropical diseases; and maternal and children’s health care.

Aid groups condemn this rule, which reflects the far-right, religious conservatism of Trump appointees in the Department of Health and Human Services, saying it is already undermining overall global health care and results in more abortions and increased maternal and child mortality.

It is reprehensible that the U.S. is able to bully the rest of the world to fall into lockstep behind its totally misogynous, insensitive policies that do irreparable harm to women, girls, men, their families and communities worldwide.

The ball is in the court of all who oppose the racist, sexist, anti-LGBTQ2S, capitalist patriarchy of the 1% who control this country. On with the struggle to wipe out Trump and all his bourgeois ruling-class perpetrators of war and rape.