The Cleveland Plain Dealer released a horrifying video to the public April 25. A guard at the Cuyahoga County jail is seen dragging an inmate, whom he has in a chokehold, from one room to another on Nov. 3. The guard, Christopher Perdue, then slams the inmate, who is not named, onto the hard floor. 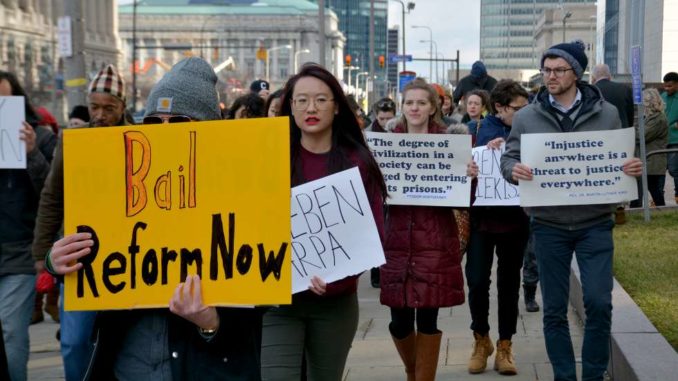 The inmate was apparently in a cell that was not his, although no one else was in the cell at the time. A Muslim, he had struggled to find a quiet place to pray that allowed him to face east. He was praying when he was dragged out of the cell. The prisoner believes that guards retaliated against him because he had spoken to U.S. federal marshals, who were conducting an investigation for the Department of Justice last year about the deplorable conditions in the jail.

Perdue was merely suspended without pay for five days. His actions are the latest of a series of atrocities that have taken place in the Cuyahoga County Correctional Center (CCCC), which houses inmates from Cleveland and the metropolitan area.

The federal investigation was prompted by the deaths of six inmates within a few months in 2018. A guard reportedly kicked the mat that one of the dying men was lying on and made no effort to check his medical condition. A seventh inmate died while the investigation was underway. The marshals issued a scathing 52-page report in November.

The conditions described have been front-page news for months and have become a scandal for the county administration and, by extension, the local Democratic Party. All but three of the 11 county council members are Democrats, as is Cuyahoga County Executive Armond Budish.

The November report indicates that the jail is designed for 1,765 people, but at the time housed 2,420 inmates. Cells built for two cellmates held as many as 12 people. Many, including pregnant women, lacked beds and slept on mats on the floor. This can be seen in the video of the Nov. 3 incident, in which people are seen lying on mats in the cafeteria.

Juveniles were being housed with adults. Their particular needs, from nutrition to counseling, were ignored.

Food service overall was rated “Unsatisfactory,” the lowest possible rating. “Mice/Vermin are present and were observed running … throughout the food service area,” according to the report. Investigators observed general unsanitary conditions in these areas. Special medical and religious diets were not provided.

The jail operates below federal fire safety standards, with inadequate inspection of fire extinguishers, fire drills held on an irregular basis, and one of two buildings lacks an automatic sprinkler system, among other violations.

Inmates placed in Restricted Housing Units, for disciplinary reasons or in some cases for their own safety, were subject to “the intentional and deliberate use of food as a punitive measure.” Food was nutritionally inadequate and at times spoiled or maliciously withheld.

Placement in RHU can be for less-than-major rules violations, and the warden can approve isolation for up to 30 days without a hearing. Juveniles and inmates with mental health challenges can be placed in isolation without consideration of their special circumstances. Inmates “have no access to an impartial hearing process.” While in RHU, they are denied mail and phone access. Cells are often cold there, but guards reportedly denied requests for blankets.

Throughout the CCCC, investigators found broken sinks, toilets and showers. Toilet paper and menstrual supplies were not always made available. There was a general lack of proper sanitation conditions and procedures.

The report’s section on health care gave CCCC a “Less-Than-Satisfactory” rating of “Marginal.” There were problems with dispensing medication, biohazard disposal, lack of recordkeeping for special needs, etc. On the third floor, “Medical is made aware of an inmate’s health need only when the need, issue, or situation digresses to urgent or emergency.”

Suicide prevention protocols are inadequate, and suicide-prone inmates are not properly screened or attended to. “For nearly a month, medical officials at the Cuyahoga County Jail pleaded with County Executive Armond Budish’s administration to make changes aimed, in part, at decreasing suicides at the jail,” according to the April 12 Plain Dealer.

Changes were finally implemented after the December death. However, suicide attempts continue: In March a man jumped off a balcony, but survived.

Abusive ‘use of force’

Additional documented outrages involved “use of force.” The Special Response Team, informally referred to as the “men in black” because of  SRT’s black paramilitary attire, have become notorious for violence and intimidation. More than 100 inmates testified about “cruel treatment.”

Further evidence of abuse, beyond the marshals’ report, has come to light recently in the media. Chantelle Glass was brought to CCCC last July after her parents called police over a fight between her and her sister. Held in jail for an unpaid traffic ticket, Glass was restrained to a chair, punched and pepper sprayed.

Some two dozen current and former inmates have filed lawsuits over conduct that includes denial of medication, physical assault, lack of mental health counseling, inability to contact attorneys while in isolation, and what the civil rights law firm Friedman and Gilbert terms, “[A] multitude of constitutional rights violations suffered by people in the custody of the County Jail.” (Plain Dealer, Dec. 20) Budish and several jail officials are named in the suit.

Other problems detainees face include lack of Spanish-speaking staff and the absence of a Muslim imam. While no inmates are forced to work, those who choose to participate in the work program are considered “volunteers” and receive no compensation for their labor.

Most of the people locked up in CCCC are not there for serious or violent crimes. What keeps them in jail for lesser offenses is a system in which money bail is set at an amount that poor arrestees cannot pay. This was the case with 27-year-old Brenden Kiekisz, who was arrested last Christmas “on suspicion of violating the terms of his court-ordered drug intervention program.” He was found hanging in his cell two days later.

The Coalition to Stop the Inhumanity at Cuyahoga County Jail (SICCJ), formed in December to protest the outrageous situation at CCCC, recently held a teach-in on the nefarious way the bail system operates. According to the presenters, 75 percent of jail inmates would be out if they had bail money. People of color suffer disproportionately from the bail extortion racket.

In Cleveland, not having bail money means having to suffer the most demeaning, abusive, unhealthy and potentially life-threatening conditions one can imagine. These conditions have met resistance, however. SICCJ has been out in the community multiple times with a petition demanding bail reform. The coalition has held a number of pickets, and members attend and speak at County Council meetings.

Public outrage has led to the arrest, firing and resignation of a number of jail officials. Now is the time to elevate the slogan, “Tear down the walls.”