More than 22 million people in the U.S. live in mobile homes, according to the Manufactured Housing Institute. In Iowa, a state where housing is becoming increasingly expensive, mobile homes have been one of the few options for those with limited or fixed incomes. 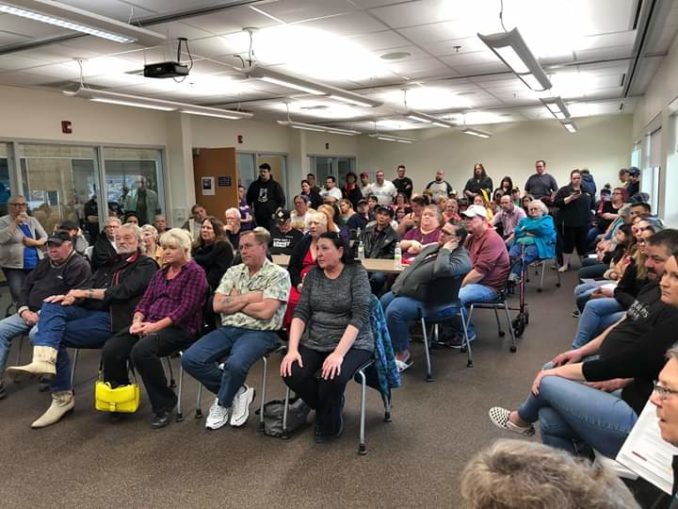 Now, due to an out-of-state company, hundreds of mobile park residents are at risk of losing their homes. Residents in four Iowa mobile home communities have been targeted with predatory rent hikes after the properties were bought by Havenpark Capital in early 2019.

The Utah-based property investment and management firm buys mobile home communities to turn a profit at the expense of tenants. They own 5,000 home sites in Indiana, Iowa, Kentucky, Michigan, Missouri, Nevada, Ohio, Oklahoma and Texas.

The new landlords greeted residents by placing notices on their doors informing them of drastic rent hikes to take place in 60 days. Rent would go up by 50 percent, 60 percent or nearly 70 percent throughout the communities of Golfview, Sunrise, West Branch and Midwest.

If the hike goes into effect, many residents would be forced out of their homes. In some cases, residents would have to leave behind “the mobile homes they owned, or for which they were still paying the mortgage,” according to an April 6 press release from the newly formed Golfview Residents Association.

Johnson County Affordable Housing Coalition Executive Director Sara Barron told Workers World, “This kind of large-scale purchase of mobile home communities and the dramatic raising of the rent is new for our community. JCAHC was alerted to the situation by the son of a Golfview resident.

“It’s difficult for me to understand how a company like Havenpark Capital can justify making money for out-of-state investors by taking money from folks who don’t have enough to meet their basic needs,” Barron said.

The decision has been called “heartless” by residents, many of whom are elderly or disabled. While Havenpark’s actions are callous, they are legal under state law.

The Iowa Code is restrictive when it comes to the rights of mobile home owners. Mobile park landlords can increase tenants’ rent with short notice and evict them “without good cause.”

Barron said affordable housing is scarce in Johnson County (where three of the communities are located). “To rent a modest two-bedroom apartment, someone earning the current minimum wage would have to work two-and-a-half full-time jobs.”

Instead of waiting for the laws to change, Golfview residents decided to act.

On April 5, more than 100 outraged Golfview residents and community allies gathered at the North Liberty Library. The meeting resulted in the formation of the Golfview Residents Association.

Similar organizing efforts at the Sunrise and West Branch communities are underway, with the hope of creating a network of mobile home associations to make a stand for the rights of residents.

GRA allies include The Center for Worker Justice of Eastern Iowa, Teamsters Local 238 and TeamCAN.

Teamsters Local 238 Secretary-Treasurer Jesse Case said, “This is a moral issue and TeamCAN and the Teamsters are ready to fight alongside the Golfview Residents Association (GRA) against Havenpark.” (April 6 press release)

North Liberty Leader sports reporter Don Lund, who was elected to the GRA board, is among the Golfview residents affected by the rent hikes. Lund was born without arms below his elbows and without lower legs and feet. Unable to work 40-hour weeks, disability payments supplement his income.

Lund has lived in the community for 20 years, and isn’t willing to give up without a fight. “I don’t have any money, any resources,” Lund said at the meeting. “I’m just a guy on Social Security who can be a part of a group and fight back, and this is what I’m gonna do.”

The GRA is demanding a meeting with the new owners, a request Havenpark has yet to accept.

Waukee resident Matt Chapman, an outspoken critic of Havenpark, has tried to rally tenants of Midwest Country Estates and others against the rent hikes. He is worried that Havenpark’s long-term plan is to evict all park residents.

The letter, dated April 16, accused Chapman of spreading rumors and requesting confidential information from Midwest residents, which he has denied. In an interview with the Des Moines Register, Chapman said, “I made myself a bull’s eye.”

“I think it was just intimidation,” Chapman added. “I was just trying to help folks.” A response letter by Iowa Legal Aid was sent to Havenpark on Chapman’s behalf.

After an avalanche of negative publicity, Havenpark announced it would delay the rent increase until July 1. This does not change the fact that many residents would still be unable to pay, forcing them to move with nowhere to go.

For the residents of these communities, the fight is just beginning.

As Golfview resident Brittany Clowers said, “Just because low-income people live here does not mean we are ‘less than.’ … [We] deserve to be able to have a home we can afford.”