The U.S. border with Mexico has become a site of domestic terrorism — inflicted by acts of the president of the United States, the Department of Justice, Customs and Border Patrol, Homeland Security and racist anti-immigrant vigilante groups. 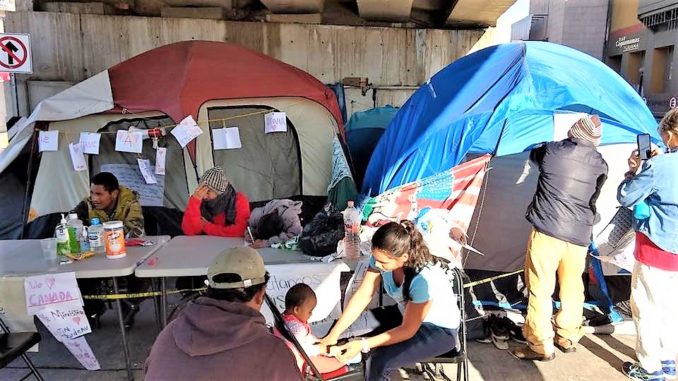 This terrorism is legal. And it is terrifying, traumatic and life altering for its victims: poor people with no alternative except to seek asylum in the U.S.

Since the beginning of Donald Trump’s presidential campaign, racist and anti-immigrant rants have been broadcast on every big-business news outlet and in print media. Trump has emboldened anti-immigrant racists to take action. He has set policies that result in government agencies ripping children from their parents’ arms. He has imprisoned migrants in brutal detention centers where private prisons make a fortune, while the people locked up are victimized over and over.

Though private militia organizations have been patrolling the border for many years, they had not yet detained migrants on the U.S. side of the Rio Grande. Now, in New Mexico, an armed group, United Constitutional Patriots, is impersonating the Border Patrol and has held at gunpoint hundreds of migrants who have crossed over.

The American Civil Liberties Union of New Mexico responded to this armed militia by sending a letter to the U.S. government asking it to intervene: “We cannot allow racist and armed vigilantes to kidnap and detain people seeking asylum. We urge you to immediately investigate this atrocious and unlawful conduct.”

The letter continues: “The Trump administration’s vile racism has emboldened white nationalists and fascists to flagrantly violate the law. This has no place in our state.” (aclu-nm.org)

Peter Simonson, executive director of the New Mexico ACLU, told CNN that while militia groups have patrolled near the border before, they are now being given permission by the White House. (April 19)

The New York Times quoted Jim Benvie, who posts online for these racist vigilantes, as saying that he issues “a verbal citizen’s arrest. If these people follow our verbal commands, we hold them until Border Patrol comes. Border Patrol has never asked us to stand down.” (April 4)

The Corpus Christi Caller Times reported on April 19 that the federal government has awarded a $39 million contract to Deployed Resources LLC in Rome, N.Y., to build “shelter” for those seeking asylum.

According to Border Patrol figures, more than 361,000 migrants were apprehended at the southern border during a six-month period ending March 31. Of that total, nearly 36,000 were unaccompanied children.

The number of migrants landing in federal detention has been relentlessly increasing since the advent of “zero tolerance” in April 2018, as families continue to flee gang violence and political repression, in Honduras, El Salvador and Guatemala in particular.

There are around 50,000 people in detention centers on a daily basis.  Numerous accounts speak of filthy conditions, inedible food, temperatures that are either extremely cold or unbearably hot, illnesses that have proven fatal in nine cases this year, and sexual assaults.

Recent photos from El Paso, Texas, have shown detained migrants, including families with young children, sleeping on rocky gravel under a border bridge in the cold with only foil blankets and two bologna sandwiches a day.

“[Immigration and Customs Enforcement] takes people from [U.S.] homes and communities in early morning raids, from courtrooms and workplaces, and from the border where they arrive seeking safety and protection, and jails them thousands of miles from their lawyers and their loved ones. Inside, they suffer solitary confinement, unsafe conditions, and severe isolation,” said Heidi Altman, the National Immigration Justice Center’s policy director.

Detention Watch Network notes that an “astonishing number of people … separated from their families and communities … [are being] held within a system that Department of Homeland Security’s own Inspector General has criticized for abusive conditions.”

U.S. Attorney General William Barr announced on April 17 that the Department of Justice would deny bond and indefinitely jail any detained asylum seekers who enter the U.S. outside official ports of entry. Barr’s “Matter of M-S-, Respondent” decision will result in the unlawful prolonged incarceration of asylum seekers and strip immigration judges of authority to consider individuals for release on a case-by-case basis.

Many asylum seekers are unable to reach one of the official ports of entry to present their claims for asylum. In fact, the Trump administration has been turning people away from ports of entry. As they wait in difficult conditions in Mexico for weeks or months, many are forced to find other routes to safety in the U.S.

When an asylum seeker is detained by the Department of Homeland Security, a bond hearing often is their only opportunity to have a judge from outside DHS review their case and determine whether they should be allowed to pursue asylum protection from outside a jail cell.

“By eliminating the right to a bond hearing, the attorney general has made DHS the judge, jury, and jailer for those who come to our border seeking safety and freedom,” said National Immigrant Justice Center Executive Director Mary Meg McCarthy. (immigrantjustice.org, April 17)

McCarthy emphasized: “The decision also is the latest attack on the judicial branch by an administration that has repeatedly attempted to weaken the authority of immigration judges. As this administration continues to consolidate the power of an anti-immigrant president, this unilateral ruling should alarm all Americans.”

While there are numerous protests at immigrant detention centers around this country and protests of deaths in detention, an unusual action was led in late March by Japanese survivors of federal detention during World War II. They were held, beginning December 1943 and officially ending February 1948, in a camp in Crystal City, Texas, located in the Rio Grande Valley.

These survivors and their descendants made a pilgrimage to the site of the Family Internment Camp where about 4,000 people of Japanese ancestry were held for indefinite detention during WW II.

Then they traveled to the South Texas Family Residential Center in Dilley where mothers and children are currently being incarcerated while seeking asylum in the United States.

There, survivors of racist federal detention and their descendants protested the present-day repetition of unlawful mass incarceration. Among their demands were humane treatment for the imprisoned and compassion for immigrants and refugees.

This was historic solidarity.