The Democratic People’s Republic of Korea has told the U.S. government there will be no more summit meetings this year if Mike Pompeo, Trump’s Secretary of State, is part of them. 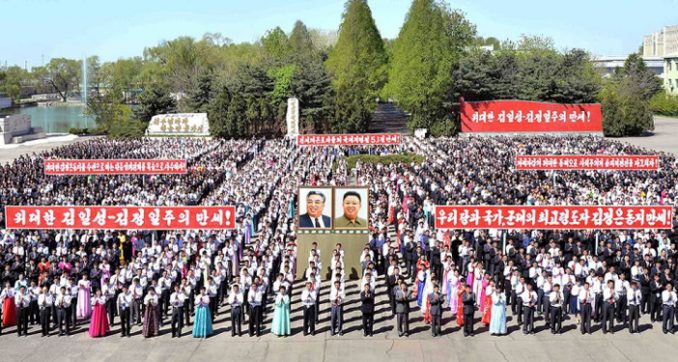 The DPRK has also reaffirmed its policy of self-reliance and independence in building a strong socialist society. DPRK leader Kim Jong Un gave a speech April 12 to the Supreme People’s Assembly on “Socialist Construction and the Internal and External Policies of the Government of the Republic at the Present Stage.”

The Korean leader spoke of how the DPRK’s development of strong nuclear defense had led the U.S. to raise the idea that there could be talks between the two countries to improve relations. This led to negotiations and two summit meetings between Kim and Trump.

But in those, he said, the U.S. used the threat of even greater sanctions to try to force the DPRK to discard its weapons, with the intent of toppling its social system.

Kim described the U.S. conditions for lifting the sanctions as “running counter to the fundamental interests of our country.” He went on to affirm that the “strategic policy” of the DPRK was to continue socialist construction “to put the national economy on a Juche, modern, IT and scientific basis.” Juche is the Korean term for self-reliance and independence.

Kim also spoke about “open hostile moves” by the U.S. that are now “running counter to the June 12th [2018] DPRK-U.S. Joint Statement.” Examples he cited included a recent U.S. test “simulating the interception of [an] ICBM from the DPRK and the resumption of the U.S. military exercises, whose suspension was directly committed to by the U.S. president.”

Kim Jong Un’s talk was corroborated April 17 in an interview given by Kwon Jong Gun, head of the American Affairs department of the DPRK’s Ministry of Foreign Affairs. He mentioned Pompeo by name and affirmed that “the U.S. cannot move us one iota by its current way of thinking.” He characterized remarks Pompeo had made about the DPRK at recent hearings of the U.S. Congress as “mean” and “reckless.”

The U.S. imperialist government and media have been uniformly hostile to the DPRK ever since U.S. troops occupied the southern half of the Korean peninsula at the end of World War II and Washington created a puppet regime there.

This hostility reached a fever pitch during the Korean War of 1950-53, when almost 6 million U.S. armed forces were sent to Korea to prevent a popular revolution, led by Kim Il Sung, from reuniting all the peninsula on a socialist basis.

This was at the height of the Cold War of the U.S. against the USSR. The brutality of the U.S. hot war on Korea, against a people just emerging from 35 years of Japanese colonial oppression, was ghastly. U.S. planes laid waste to every building over two stories high in the north, and many times threatened the DPRK with atomic bombs. At the same time, a puppet regime led by Syngman Rhee carried out a bloodbath of the progressive forces in the southern part of Korea.

The people of the DPRK, like those in Vietnam a generation later, refused to bow down to U.S. imperialism and fought the U.S. to a stalemate, aided by China and the Soviet Union. It was the first defeat in war for the Pentagon, and that has never been forgiven by the war makers.

Inside the U.S. at that time, the FBI, under J. Edgar Hoover, and the Congress, led by Sen. Joseph McCarthy, carried out a sweeping purge of progressives. Anyone who openly opposed the war in Korea was branded as a “red,” subject to public humiliation, firing and possible imprisonment.

Even today, the corporate media march in lockstep to demonize the DPRK for its courage in standing up to the U.S. as self-proclaimed “leader of the free world.”