An air of celebration energized the press conference held by supporters of political prisoner Mumia Abu-Jamal on April 18. The day before, Philadelphia District Attorney Larry Krasner announced that he was withdrawing his appeal of the Dec. 27 decision by Common Pleas Court Judge Leon Tucker granting Abu-Jamal new appellate rights. 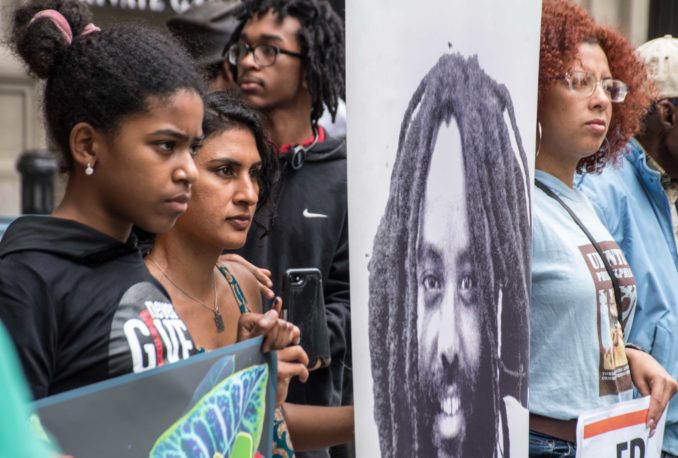 Youth in support of Mumia in Philadelphia, April 18

The decision opens the way for four Post Conviction Relief Act (PCRA) appeals, involving more than 20 separate complaints, to be reheard before the Pennsylvania Supreme Court.

The April 18 press conference was held outside City Hall next to a statue honoring 19th-century African-American educator, writer and fearless civil rights activist Octavius V. Catto, who was murdered by a racist mob in 1871. Installed in September 2017, it is Philadelphia’s only monument to a historic Black leader and stands on the opposite side of City Hall from the much maligned statue of racist former Police Commissioner and Mayor Frank Rizzo.

The outdoor location also offered the opportunity to do outreach for an April 27 rally for Mumia to people passing by, many of whom stayed to listen to speakers.

Pam Africa, MOVE member and Minister of Confrontation of the International Concerned Family and Friends of Mumia Abu-Jamal, chaired the noontime event, which brought out more than 75 people from community, political and religious organizations. While applauding Krasner for bowing to public demands to drop his appeal, speaker after speaker raised that Abu-Jamal, unjustly imprisoned since 1981 because of police, judicial and prosecutorial misconduct, should be released now!

Supporters are reinvigorated to demand that charges against Abu-Jamal be dropped and that he be freed because he is factually innocent. Mumia has always maintained his innocence.

While noting that DA Krasner’s Apr. 17 decision contained distortions about Tucker’s filings, Rachel Wolkenstein, a former attorney for Abu-Jamal, nonetheless called the reversal “historic.” She noted it was “the first time there has been a direct legal push-back against the Fraternal Order of Police” in Philadelphia since the case began in 1981. Wolkenstein cautioned however, that “It can’t be seen that Krasner is on our side. The boxes of hidden evidence ‘suddenly discovered’ by Krasner in the DA’s office [one day after Tucker’s initial ruling] are proof of everything we say and more about this frame-up.”

Professor Johanna Fernandez, with the Campaign to Bring Mumia Home, challenged the corporate media for historically carrying the FOP line vilifying Abu-Jamal. “Mumia was an award-winning journalist and president of the Association of Black Journalists. Had Mumia been a white journalist, would we be having this conversation today?

“Mumia was part of the Black Power movement fighting for justice in the 1970s. He was the only journalist in Philadelphia who humanized members of the MOVE organization,“ she asserted.

Fernandez put the case in historic context, noting that within months of Abu-Jamal’s 1982 conviction, 15 of the 35 officers who collected evidence in his case were tried and convicted of corruption, evidence tampering and falsifying evidence to obtain convictions in several other cases.

Fernandez noted that Albert Sabo, the judge in Abu-Jamal’s initial 1982 trial who was brought back from retirement to hear his first PCRA appeal in 1995-96, was known as the “hanging judge.” She recounted some of the key issues that will be addressed when Abu-Jamal’s PCRA appeals are reheard.

“Exculpatory evidence [evidence that could exonerate a defendant in a criminal trial] was withheld during Abu-Jamal’s initial hearing. There was proof [a driver’s license found in slain police officer Daniel Faulkner’s pocket] that Kenneth Freeman, a trained sharpshooter, was present and matched eyewitness descriptions of a man seen fleeing the scene. This evidence was not provided to Mumia’s attorney.

“When Mumia comes home,” Fernandez concluded, “the entire establishment of Philadelphia will be on trial. As Judge Tucker noted in his decision, this case is one of the most famous, if not the most famous, trial in the world. 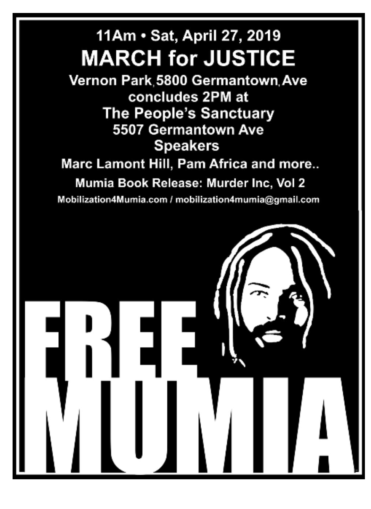 Megan Malachi with Philly for REAL Justice spoke as one of a generation of younger people for whom Mumia has been imprisoned their entire lives. “I grew up in Philadelphia with the background of the attacks on MOVE and Rizzo’s impact on how, as a Black person, you think about yourself and about racism in this city. My father was beaten by cops under Rizzo’s command.

“They freed [rapper] Meek Mill, but without freedom for Mumia that means nothing. We didn’t vote for Krasner to make things better — that’s our job. We put him in office to do the right thing. Either Krasner lets Mumia out or he should get out of office. The movement around mass incarceration in this city is about Mumia. Let’s get on point!”

Mike Africa Jr., whose mother and father, MOVE 9 members Debbie and Mike Africa Sr., were released in 2018 after 40 years in prison, challenged the crowd to never give up on our political prisoners. “The judges are not going to do the right thing on their own. We have to keep up the pressure.”

American Postal Workers (APWU) Local 10 activist Bill Bachmann from New York City called on the national AFL-CIO, Change to Win and other major union formations to mobilize members in defense of and for the release of Mumia Abu-Jamal: “This would put a big dent in the overall armor of the so-called criminal justice system set out to terrorize Black and Brown people. Justice for Mumia is justice for us all.”

Brother Gregory Muhammad of the Nation of Islam Mosque #12 recounted how Abu-Jamal’s successful challenge to the Pennsylvania Department of Corrections won hepatitis C treatment for all prisoners in the state: “The power of the people will not be denied.”

Documents listing the PCRA claims to be filed on Abu-Jamal’s behalf, a timeline of his struggle for freedom and his biography can be found at Mobilization4Mumia.com/resources.