A “Conversation on Reparations,” held here on April 13, featured Monica Moorehead, Workers World Party 2016 presidential candidate and editor of “Marxism, Reparations and the Black Freedom Struggle”; Nabila Bey, with Philadelphia N’COBRA (National Coalition of Blacks for Reparations in America); and facilitator Deandra Patrice Jefferson, from Philly for REAL Justice and WWP, were also on the panel. 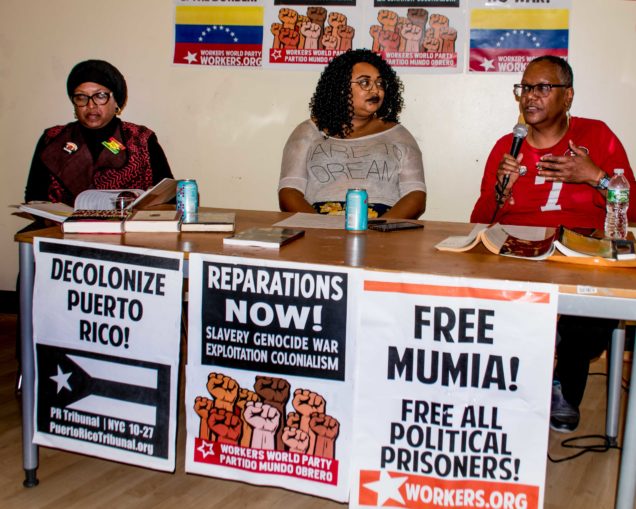 While there has been a struggle to raise the demand for reparations for slavery in the U.S. for some time, now this discussion is reaching broader audiences. It is being discussed in the corporate media and has surfaced as a key issue among potential candidates for the Democratic Party nomination leading up to the 2020 presidential primary.

Moorehead opened the discussion by stating that her book was inspired by the struggles for reparations led by N’COBRA following the World Conference on Racism in Durban, South Africa, in 2001. She noted, “The trans-Atlantic slave trade netted untold trillions of dollars — money owed to our enslaved ancestors. But how do we put a price tag on the trauma that came from slavery, lynching, Jim Crow laws (political lynching), and police killings of Black people today?

“The original promise of ‘40 acres and a mule’ was never realized because of the rise of the Ku Klux Klan. But the ‘Free the land’ demand raised by the Republic of New Africa continues today through struggles for community control of schools, affirmative action on the job, community control of the police and taking down racist statues honoring the Confederacy. The issues are not confined to the U.S. The African Diaspora spread throughout the world including to Brazil and Puerto Rico.”

Moorehead pointed out that most of Africa is still reeling from the impact of colonization and neocolonization. The wealth of Africa is still being stolen on a daily basis through the debt crisis created by the World Bank, International Monetary Fund and greedy, parasitic corporations and banks.

“The bottom line,” she noted, “is that reparations on a global basis can only be permanently won by replacing the capitalist system with a socialist society that guarantees free, quality health care, jobs, education, housing, etc.”

Moorehead quoted the Rev. Dr. Martin Luther King Jr. from 1964 when he said: “No amount of gold could provide an adequate compensation for the exploitation and humiliation of the Negro in America down through the centuries. … Yet a price can be placed on unpaid wages. … The payment should be in the form of a massive program by the government of special, compensatory measures which could be regarded as a settlement in accordance with the accepted practices of common law. Such measures would certainly be less expensive than any compensation based on two centuries of unpaid wages and accumulated interest.”

King proposed, “[J]ust as we granted a GI Bill of Rights to war veterans, America [should] launch a broad-based and gigantic Bill of Rights for the Disadvantaged, our veterans of the long siege of denial.”

In her opening remarks, Nabila Bey picked up on this, noting that when King called for the 1968 Poor People’s March on Washington, D.C., he said, “We come to Washington to get our checks.”

Bey called out some of the major banks and corporations that profited from the slave trade, including Chase Manhattan Bank, AETNA Insurance, Lehman Brothers Bank, JP Morgan, New York Life and Wachovia (now Wells Fargo) Bank. “They didn’t stop with slavery,” Bey stated. “They used the so-called ‘mortgage crisis’ in 2008 to steal the homes and land from millions of poor people.”

The conversation took up the HR40 bill on reparations, first introduced by Rep. John Conyers (D-Mich.) in 1989 to establish a commission to examine the institution of slavery in the U.S. and its first colonies and to make recommendations for remedies. Moorehead said: “Any demands made regarding reparations have to come from the mass struggle. Conyers called for material compensation for Black people at a time when President Bill Clinton would not even apologize for slavery.”

“Symbolism and materialism are connected,” observed Moorehead. “When a Confederate statue is taken down, it’s a psychological victory, but why not replace it with a statue to Harriet Tubman or Malcolm X! Everything is about the struggle and how we can move it forward. One of the most important struggles for reparations right now is the demand to take down the statue of former racist Mayor Frank Rizzo in Philadelphia.”

Bey called for HR40 to be updated to include the release of all political prisoners, with Mumia Abu-Jamal at the top of the list, and for the repeal of the “except clause” in the 13th amendment that allows for slave labor to continue in U.S. prisons.

She added, “Restitution includes abolishing the criminal justice system, creating media for African Americans to run their own stations, compensation for stolen land, forgiveness for education loans, free education through the doctoral level and dual citizenship with any country of choice in Africa.”

Deandra Jefferson raised the demand “abolish the police,” to which Moorehead added: “There are 2 million people in prison, with an additional 6 to 7 million on probation or parole. Black people make up around 40 percent—​way out of proportion to their numbers in the general population. Abolishing the prisons would be a good start.”

Audience members joined the conversation, including representatives of Black Alliance for Peace, Philly for REAL Justice and the International Action Center. They brought up other aspects of the struggle for reparations, including the need to support im/migrants and reconciling the fight for decolonization with recognition that the land in question, while worked by enslaved Africans, was stolen from Indigenous peoples.

Palestinian activist and author Susan Abulhawa noted that the reparations granted to date seem to be exclusively for wealthy white people, including compensation for French slaveholders in Haiti and payments to white farmers in Zimbabwe: “The push back against formerly and currently colonized nations seeking reparations—​people who have been exploited and robbed—​is always, ‘Oh, it’s too much to ask.’”

Moorehead responded: “The legacy of slavery impacted every aspect of the African Diaspora. The fact that from the 1500s through the 1800s over 40 million African people were kidnapped had a devastating impact on the African continent, still the most underdeveloped –- everything was stolen including the minerals, gold, diamonds that could have been used to build up infrastructures.”

“The struggle for reparations cannot be carried out in a vacuum,” Moorehead concluded. “We need to support the call for May Day: ‘There are no walls in the workers’ struggle.’ Capitalism cannot be reformed. It’s over!”