Workers World conducted the following interview in Philadelphia with Mong Palatino, Chair of BAYAN Metro Manila, and Ed Cubelo, Vice Chair of Kilusang Mayo Uno (May First Movement). They are currently on a U.S. speaking tour about the struggle in the Philippines. 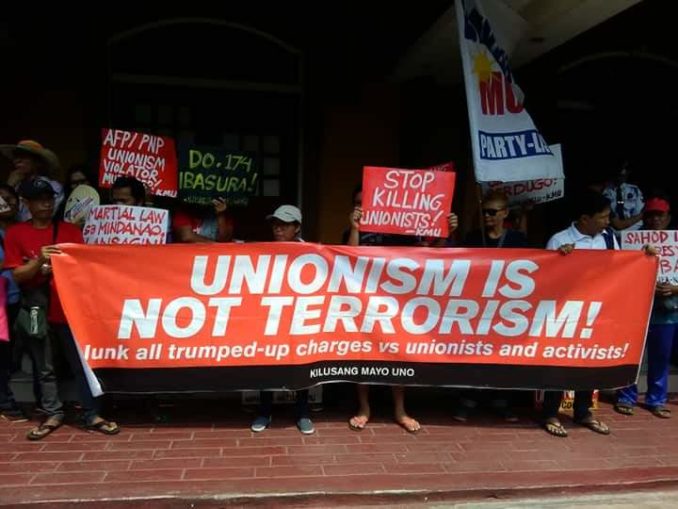 Workers World: What are the main objectives of the speaking tour?

Ed Cubelo: We want to inform as many people as possible about the worsening condition of Filipino workers under the Duterte regime.

We hope to establish strong solidarity with U.S.-based groups in a common campaign to fight for workers’ rights.

Mong Palatino: We are also discussing the current human rights situation in the Philippines and hope to build unity among Filipinos in the U.S. to fight Duterte’s repressive government.

WW: What are the current conditions for workers in the Philippines?

EC: Due to the imposition of new taxes like the TRAIN [Tax Reform for Acceleration and Inclusion] law, prices of basic commodities are soaring.  Salaries for the Filipino workers remain very low. In the capital city, Metro Manila, wages are only U.S. $10.30 a day and much lower in other regions.

Contractual workers, 70 percent of the workforce, are not allowed to join or form a union, have no benefits, are vulnerable to termination and prone to precarious working conditions. Their salaries are mostly much lower than minimum wage, with long hours of work and no overtime pay.

When workers fight back, Duterte’s regime brands their organization — especially the KMU [Kilusang Mayo Uno] — as a terrorist organization “front.” There are massive illegal arrests and red baiting of organizers and worker-activists, with the regime using its drug war campaign to cover up arrests. A combination of police and military force is used to surveil workers. Many workers and organizers have been sent to prison.

MP: Due to the poor conditions for workers and the repressive political climate in the country, many are forced to leave to seek better opportunities abroad. Our migrant workers experience tremendous hardships, but they endure for their families struggling to survive back home. These workers are modern day heroes because they keep the economy afloat.

Yet this does not address how successive government administrations have not created enough jobs to keep families together. Further, the government has systematically promoted labor export policies that push Filipinos, including skilled workers, to leave the country.

WW: What is the U.S. role in the Philippines?

EC: The U.S. acts as a domineering neocolonial master over the Philippines. Economic policies are crafted for its imperial and neoliberal interests.

As the Philippine economy is “opened up” for neoliberal profit, it also remains agrarian and nonindustrial. Flooded with foreign consumer products, the economy is a source of raw materials, minerals and rare earth ores for the U.S. and its allies. Workers are a cheap labor force for extractive industries, assembly line productions and business outsourcing like call center service employees.

Infrastructures and facilities for these economic and trade activities are financed through loans from institutions like the International Monetary Fund and the World Bank. Our economy is debt-ridden. Half the government’s annual national budget is allocated for debt servicing alone.

In the political field, the U.S. has a stranglehold over the Philippine government, while the Philippine military is the main machine of U.S. dominance.

WW: Can you describe some of the major struggles of Filipino people in response to these conditions?

EC: The mainstream people’s movement in the Philippines is basically an anti-imperialist and anti-feudal mass movement. The KMU, as a member of the International League of People’s Struggles (ILPS), conducts anti-imperialist struggles at home and with allies and friends abroad, including exposing and opposing U.S. wars of aggression.

MP: Land reform struggles are continuously asserted. Labor protests are rising. Student organizing has amplified the call for free education and also the campaign for justice in relation to Duterte’s drug war.

WW: How can people in the U.S. show solidarity?

EC: Circulate the real situation of Filipino workers in the Philippines. Support the establishment of a workers’ school with a donation to the Paaralang Crispin Beltran (Crispin Beltran Workers’ School). Organize to send a delegation to KMU’s yearly International Solidarity Affair. (tinyurl.com/KMUISA2019)

You can also join the progressive organizations of migrant workers in the U.S., for instance, Migrante USA or Anakbayan-USA.

MP: And you can demand the U.S. government stop sending police and military aid to the Philippines!