“Just because it doesn’t look like the exterminations we’re accustomed to seeing doesn’t make it any less genocidal,” says novelist and activist Susan Abulhawa. The bestselling author of “Mornings in Jenin” and “The Blue Between Sky and Water,” she is also the founder of the nonprofit organization Playgrounds for Palestine. She was arrested by Israeli border authorities last November when returning to her homeland for the Kalimat Palestinian Literature Festival. She was deported back to the United States where she currently resides.

Abulhawa spoke with Ted Kelly of Workers World on the eve of the Israeli elections on April 9 that resulted in the reelection of hardline, racist, incumbent Prime Minister Benjamin Netanyahu. 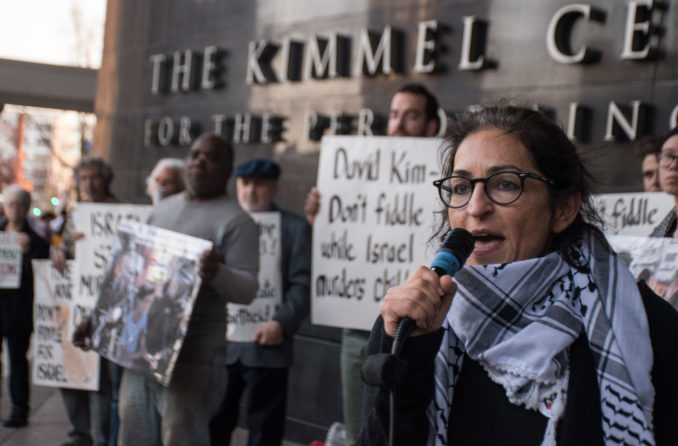 Workers World: March 30 marked the 1-year anniversary of a new phase in the Great March of Return protests in Gaza. In a single year, 20,000 Palestinian activists have been shot and maimed by Israeli snipers. Nearly 300 have been killed, including infants, journalists, nurses and doctors. This ongoing massacre is still misunderstood as a “border conflict.”

Susan Abulhawa: News media often talk about “the border,” but there is no official border. After the 1948 assault on Palestine, Gaza remained unconquered and became a protectorate of Egypt. There was a demilitarized zone of about 3 miles around Gaza. Israel decided the innermost line of that zone is the “border.” Israel has perfected an “imperialism by the inch” tactic. It never was ever a border. Palestine is whole. The people have been whole. All these lines that are drawn are quite arbitrary.

WW: What this means is that when people see images of protests at the partition fence, that fence is within even Israel’s recognized boundaries for Gaza?

SA: Exactly. Israel created a new demilitarized zone that Gazans have been living under. And Gaza is effectively a death camp. We see how Israel patrols and enforces the siege on Gaza through force of tremendous death technology. Snipers. Drones. From the sea they have patrol boats that are constantly shooting at fishermen. Gazan fishermen are not allowed to venture beyond 3 nautical miles, but even within those 3 nautical miles, Israel still shoots and drowns a lot of those boats. It’s a complete siege.

There are 2 million people in Gaza who are utterly besieged. They cannot leave by land, water or air. Israel has routinely bombed hospitals and schools and any infrastructure, including electric plants, flour mills, mosques, sewage treatment and water treatment plants. Israeli politicians have said they’re going to send Gaza back to the Dark Ages. They said that and they’re doing that.

WW: They are also using experimental tear gas, white phosphorus and other “death technology,” as you have accurately named it.

SA: Gaza serves a purpose for Israel as a human laboratory, as a testing ground for Israeli weapons exports. What a lot of people don’t know is that Israel is the largest exporter of arms per capita in the world. That means the export of death is their main industry. And the attractiveness of Israeli weapons is that they are marketed as “field-tested” or “battle-tested.”

In 2014, when Israel killed over 2,200 people in Gaza, a huge portion of them children, they were testing the Hermes 900 drone — they used it extensively on people in Gaza. Three weeks after the assault there, Israel held a huge drone trade show in which they highlighted the “performance” of the Hermes 900. It sold for a lot of money, and the makers of that drone made a lot of money. That’s economics for Israel.

Israel has a new series of drones called Cyclone that have been used on protesters in the Great March, dropping all kinds of aerosols and new gases. Plenty of photos and other evidence show this kind of gas as red in a color nobody’s seen before. Gaza is a testing ground. It’s a laboratory.

WW: Israel is often thought of as a recipient of arms deals from the U.S., but you’ve found that they are in fact the preeminent global exporter per capita of weaponry.

SA: Israel has been notorious for arming rogue regimes long after even countries like the United States couldn’t bear the human rights abuses. Case in point: the genocide in Myanmar. Israel has been arming the Myanmar forces as they are committing atrocities against the Rohingya minority, a Muslim minority.

SA: Israel has many quid pro quo agreements with Paul Kagame. One is Israel’s support for a United Nations effort to basically rewrite the narrative of the Rwandan genocide. In exchange, Rwanda has agreed to accept African asylum seekers deported from Israel, which is deporting them to whatever country will take them.

WW: This seems to mark a change from Israel as a settler-colonial state to now an imperialist state in its own right.

SA: Israel has actually been up to this from the very beginning. They supported apartheid South Africa as far back as the 1950s. They armed all sides of the Angolan civil war for over 40 years. They armed despots in Guatemala and El Salvador. They provided almost exclusively the arms to the Somoza government in Nicaragua, and later they helped fight the Sandinistas by arming the Contras. They’ve had their hand in for some time, most notably in South Africa.

Israel had a very special relationship with [white supremacist] South Africa. After the whole world couldn’t stomach apartheid South Africa anymore, Israel stood with them until the end. [During the June 16 Soweto Youth Uprising in 1976], when South African white police mowed down children, those guns and that ammunition were provided by Israel.

WW: This gives the lie to liberal rhetoric of the sort we hear from 2020 presidential candidate Joe Biden, who just affirmed himself as a proud Zionist.

SA: I think the Democratic Party really underestimates how fed up their base is with unconditional support for this right-wing, fascist, settler-colonial, apartheid state. Rep. Ilhan Omar has split things wide open. She deserves credit because she had the courage to say what needs to be said, and she’s paying a really heavy price for it — personally, professionally, politically, down to her physical safety. The FBI just arrested somebody who was threatening to blow her up. Ten years ago we couldn’t have seen an Ilhan Omar.

WW: But much like in the U.S., where there are no truly anti-imperialist candidates, in Israel there is no anti-apartheid party.

SA: As bad as things are in the U.S., I don’t think you can compare it to Israel, whose politicians are in a league of their own. The things they say publicly and unashamedly are stunning. Politicians in the U.S. use dog whistle [language] and code their rhetoric. As racist as this country is, there are some things you can’t say out loud.

But in Israel, it wins you elections when you say things like, “We need to carpet bomb all of Gaza” or “‘We need to chop their heads off.” Netanyahu says, “This is a country only for Jews.” These are quotes. Every candidate has said things that are so fascist and racist that it’s stunning.

Israeli society is in the same stage that Europe was at in the 1930s, where things were said about Jews and gay people, out loud and in the newspapers, that should never be said about other human beings. That’s where Israel is right now in terms of rhetoric and public discourse.

WW: Justice Minister Ayelat Shaked put out a video this year parodying a cologne commercial, advertising a fragrance called “Fascism.” She’s getting away with this by claiming she was being ironic.

SA: But she’s said explicitly before that she’s proud to be a fascist.

WW: In Europe in the ‘30s there were liberal observers who said Hitler was only deploying racist rhetoric to appeal to a hardline base for the elections, but he didn’t really mean it. This same mindset seems to be at play with Netanyahu’s threat to annex the West Bank when he wins the election.

SA: It wasn’t a threat. I think it was a promise. Netanyahu is flying high on his ability to convince the United States and Donald Trump to affirm the annexation of the Golan Heights and to move the embassy to Jerusalem. He’s been campaigning on annexing the rest of Palestine. Netanyahu has said this repeatedly. Palestinians have been telling the world that [Israel] has no intention of allowing a Palestinian state to emerge. But U.S. media choose to ignore that and instead play up this impossible two-state narrative that is utterly discredited.

The two-state solution in the first place was racist — for a lot of reasons. It was a way to consolidate power over the whole of Palestine and allow for the emergence of a permanent cheap labor pool for Israel.

WW: Regarding the West Bank, another member of the Tamimi family has been arrested.

SA: The West Bank is also under siege but not at quite the same intensity as Gaza is. The Tamimi family has been a particular target because of their ongoing activism that has captured imaginations throughout the West. The slap from Ahed Tamimi [of an Israeli soldier attacking her family] reverberated around the world. This family, as all Palestinian families do, live under constant threat, under constant harassment. In night raids, soldiers literally break into your house and grab your children and members of your family from your beds and cart you off to prison. It’s a different kind of horror experienced by each group of Palestinians, depending on where they live.

Of course there are the Palestinians who are citizens of Israel. We call them the ’48 Palestinians, who remained in the 1948 territory [that was transformed into Israel]. They are reviled [by Israelis] and face another set of discrimination and harassment and surveillance and policing.

WW: We must speak of the Palestinians living in the diaspora right now, like yourself. You were held by Israeli authorities on your way home to attend the Kalimat Palestinian Literature Festival and experienced the Israeli carceral [penal] conditions firsthand.

SA: Like a lot of Palestinians who speak up against Israel, or who speak up for BDS [Boycott, Divestment, Sanctions] or for whatever arbitrary reason, Israel did not allow me in. In general, Israel harasses anyone of Palestinian or Muslim descent. They target Palestinians and Palestinian supporters, they stop you, detain you, are known to take away your phones and go through your email [and other sources of information].

The irony is that all those people who were carting me off to prison and interrogating me — all of them are foreigners, without exception. None of them are native to that place. Me, on the other hand, I am Indigenous to Palestine.

WW: It’s been about a year since you were one of the key organizers here of the Don’t Orchestrate Apartheid protests against the Philadelphia Orchestra for their decision to tour Israel. I’m wondering if you have any thoughts on Madonna’s recent decision to cross the BDS picket line and perform in Israel.

SA: History will not judge Madonna well. She’s a friend of the Netanyahus. She’s been a supporter of Zionism for a long time. She’s basically saying, “I don’t care about the lives of Palestinians. I don’t care that they’re being brutalized and ethnically cleansed. I don’t care that Gazans are living in a death camp. I’m getting paid a million dollars, and I’m happy to lend my name to apartheid.”  That’s what Madonna is saying.

A Jewish-Canadian billionaire was quoted as saying Madonna’s presence in Israel will go a long way in terms of “positive branding” of Israel. So there you have it. Madonna is branding apartheid. That’s “art-washing.”