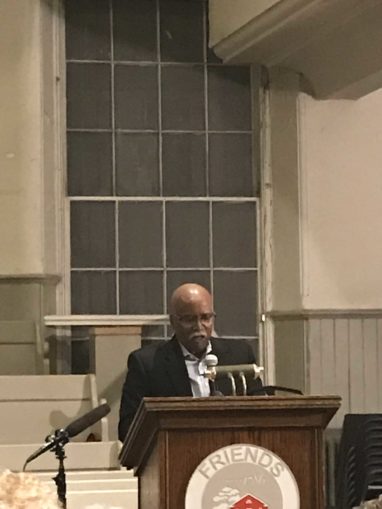 J.J. Johnson of the ‘Fort Hood 3’ speaks at the My Lai massacre commemoration, March 22, New York

Veterans For Peace, New York Chapter, presented an art installation in Manhattan on March 22 that exposed the U.S. war crime known as the My Lai massacre. In the three-day exhibit at the Quaker House on Rutherford Place, artist Mac MacDevitt showed with annotated photographs the horror of the slaughter of 503 unarmed Vietnamese villagers on March 16, 1968 — an atrocity subsequently exposed to the world. U.S. GIs, following the orders of their officers and under the guidance of the Pentagon, carried out this egregious war crime. (tinyurl.com/y6tfmgl4)

To anyone still uncertain about the role of current U.S. foreign policy, this look back 51 years ago shows that “humanitarian aid” is the unlikely outcome of any U.S. military intervention anywhere.

J.J. Johnson, who as part of the “Fort Hood 3” served time in prison for refusing orders in 1966 to ship out to Vietnam, gave a talk linking My Lai to current U.S. military and foreign policy. The three Fort Hood, Texas, GIs — Johnson, Dennis Mora and David Samas — were the first military heroes on the U.S. side of that conflict. Their personal courage showed the potential of organizing against the war within the U.S. Armed Forces. Here is Johnson’s talk:

The Lessons of My Lai

I’m honored to share the stage with this roster of  people’s champions. My appearance here is a consequence of my good fortune to have met — and organized with — like-minded GIs during the war.

Each of the Fort Hood Three agreed that we could not in good conscience take part in an illegal, immoral and unjust war of aggression. We were able to remain true to our beliefs with the support of our loved ones, a growing and supportive anti-war movement and the courageous example of the Vietnamese people.

The exhibit, which we’ve gathered here to introduce and celebrate, calls to mind Howard Zinn’s “People’s History of the United States.” In the past, I’ve often spoken about what some call “The United States of Amnesia.” But on closer examination, it’s clear that so many in our nation aren’t victims of amnesia, but rather a highly coordinated system of obfuscation and misinformation.

Those who profit so handsomely from the status quo have no intention of permitting the  truth to set us free. The horror of My Lai should never leave our consciousness.

But nor should we treat My Lai as an aberration. The journalist and author Nick Turse years ago informed us that My Lai was just one of many massacres during the U.S. aggression in Indochina. Turse has documented bloodier slaughters, such as Speedy Express in the Mekong Delta in 1968.

We mourn the loss of the 58,000 mostly young men whose names are inscribed on the Vietnam Veterans Memorial in Washington, D.C. and those who returned physically and psychologically maimed. But I reject Ken Burns and Lyn Novick’s false equivalence of blame on both sides.* I also mourn the deaths of more than 1 million Vietnamese soldiers, 2 million civilians, the 5.3 million who were injured and the 11 million Vietnamese who were driven from their homes.

I mourn and condemn the poisoning of millions with Agent Orange. Last year I visited [Vietnam] and held children who are disabled as they continue to suffer from the poison. The past is prologue, and reparations are in order.

The exhibit challenges us to “remember the past so as not to repeat it.” Of course, the U.S. empire skillfully adapts its aggression and military adventures to forestall protests and opposition. The draft was ended. Many ground troops were replaced by mercenaries. Pilots were replaced by drones, and TV cameras were removed from the battlefields.

Yet, the United States still maintains nearly 800 military bases in more than 70 countries and territories in every continent on the globe. And the U.S., with about 4.4 percent of the world’s population, accounts for 37 percent of the world’s military spending, which is roughly the amount of the next seven largest military budgets combined. Imagine all the people’s needs that could be met with the $717 billion that’s budgeted for war this year!

War and war spending are bipartisan. In 2016, for example, the U.S. military dropped 26,171 bombs. Last year we [the U.S. military] bombed Syria, Iraq, Afghanistan, Pakistan, Libya and Somalia. Today, our nation has the blood of thousands on its hands in Yemen and is attempting to overthrow the government in Venezuela.

We [the anti-war movement] should continue to sound the alarm, but we also have much to be optimistic about. Activists from every generation are on the move and in the streets. We salute and demand the immediate release of Veterans For Peace members Tarak Kauff and Ken Mayers [arrested at a protest in Dublin, Ireland, this March]. Their actions, like this exhibit, connect the past to the present.

And as we work with younger activists to combat militarization and its human, financial and environmental devastation, we, too, can draw important lessons from their struggles.

As a trade unionist, I’m inspired by the wave of teachers’ strikes. And movements such as Occupy Wall Street, Black Lives Matter, Standing Rock hold valuable lessons for our struggles. Last year, high school students organized the nation’s largest protest against gun violence. And last week, some 1.4 million children around the world took part in a global climate strike to demand action against the world’s greatest danger — the climate catastrophe.

We understand the importance of developing alternative institutions, but I’m also encouraged by the emergence of progressive elected officials such as some of the women of color who were elected last November — chief among them, Ilhan Omar, Rashida Tlaib, Ayanna Pressley and, of course, Alexandria Ocasio-Cortez.

Their success depends largely on what we do on the ground. Let’s learn from each other this weekend and draw strength and inspiration to move forward and to prevent future My Lais.

*Burns and Novick directed the 10-part documentary, “The Vietnam War,” first shown on PBS in the fall of 2017.

Catalinotto is author of the 2017 book, “Turn the Guns Around: Mutinies, Soldier Revolts and Revolutions.”