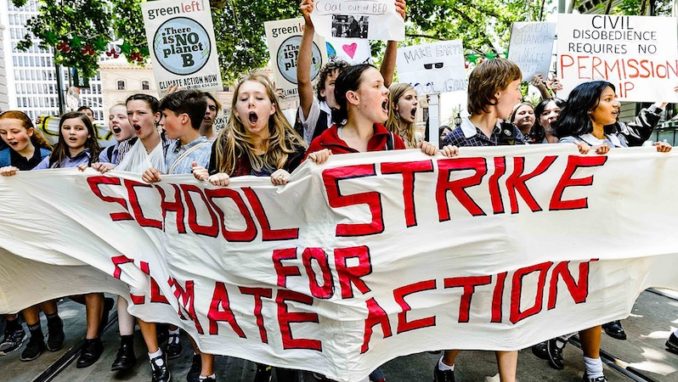 The following article was published in the March 16-17 issue of Junge Welt, a progressive German daily newspaper. Excerpts were translated by Workers World Managing Editor John Catalinotto. A reported million students marched, according to the French newspaper Le Monde.

Hundreds of thousands of young people around the world demonstrated on Friday [March 15] for a radical change of course toward more climate protection. Under the slogan “Fridays For Future,” rallies took place in such European cities as Rome, Prague, Vienna, Warsaw, London and dozens of German cities.

In Berlin, Cologne, Dresden and Stuttgart, among other cities, thousands of schoolchildren, students and supporters marched through the streets with placards. The organizers said there were 300,000 participants in Germany.

Around the globe, more than 2,000 rallies and student strikes had been announced in more than 120 countries — in Germany alone about 200. The wave of protests began early in the morning in Asia and Oceania, where tens of thousands of young people also took to the streets. There were demonstrations in Sydney, Bangkok, New Delhi and Hong Kong.

Participants in these demonstrations carried posters like: “You are destroying our future” and “If you don’t act like adults, we will.” Posters in Germany said, among other things: “We can survive cut classes, not climate change” and “If the world were an auto company, you’d have saved it long ago.”

According to the findings of the Intergovernmental Panel on Climate Change (IPCC), the Earth has warmed by about 1 degree Centigrade compared to in the pre-industrial era, and in Germany even more so. According to analyses by the World Weather Organization, the years 2015 to 2018 were the four warmest since records began in the 19th century.

If conditions continue as they are now, the world will probably be a good 3 degrees Centigrade warmer by the end of this century. The consequences include more heat waves, longer droughts and more storms, heavy rain and floods. To stop the trend, greenhouse gas emissions must be greatly reduced.

For months now, young people in many countries around the world have been boycotting classes once a week in protest against the lack of climate protection efforts. Older generations are supporting them.

Around 20,000 scientists from Germany, Austria and Switzerland have signed a statement to emphasise the importance of the climate movement. Parents are also supporting young people through their organization, “Parents for Future.” Among other things, they (PF) ask that school expulsions or other disciplinary measures be waived if pupils skip school because they are protesting. Teachers and social workers from a primary school in Berlin came to protest with an entire class.