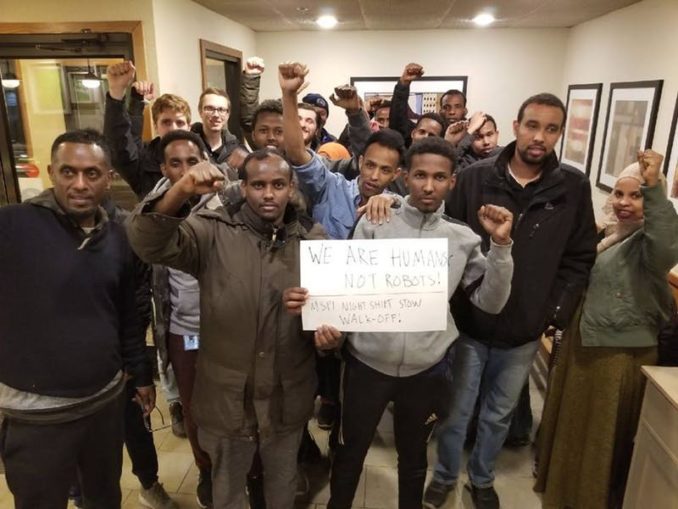 Workers at the Amazon fulfillment center in Shakopee, Minn., a suburb of Minneapolis, escalated their campaign for workers’ rights on March 8 by carrying out a three-hour work stoppage. The strike occurred during the night shift, when a group of about 30 workers, mostly Somali immigrants, walked off the job to protest the mega-corporation’s management.

A Facebook post went viral as the workers held up a handwritten sign reading: “We are humans, not robots” and listed their complaints on a legal pad. Previously, WW reported that workers’ frustrations were intensified by a panoply of grievances with management: from lacking language translation services, to inhumane intensity of work, to racist selection of workers for promotion, to pitiful health benefits, to hiring schemes that exploit temp workers, to the need for more bathroom visits and prayer breaks. Amazon workers are up against a corporation unwilling to part with profits.

The Shakopee workers organized and held a rally last December — believed to be the first in the U.S. against Amazon —  to show unity and express their discontent over not having a voice in how work is handled.

Workers at a fulfillment center in Poland, describing themselves as “workers from Amazon from Germany, Spain, Poland, France, and supporters from Italy,” posted a video on the internet declaring “Solidarity!” with the immigrant and non-immigrant workers in Shakopee.

Amazon around the world

Amazon Inc. is infamous worldwide. Its CEO, Jeff Bezos, is currently the richest person in the world, with an estimated worth of $138 billion. The profits of Amazon surged, nearly doubling, between 2017 and 2018. Yet the corporation paid no federal income taxes.

Bezos also owns The Washington Post. Media watchdog organizations point out biases in its reporting. Fairness and Accuracy in Reporting asserts that the acquisition “instantly made him the most powerful media figure in the nation’s capital — a handy position to be in when your company is seeking multi-billion-dollar government contracts.”

Concurrently, Amazon has offered its cloud computing services to the U.S. government’s surveillance and repression regime. To the tune of $600 billion, the National Security Agency relies on Amazon’s cloud network to collect metadata and even intimate conversations of U.S. residents, creating a spy apparatus unparalleled in history.

Against such a titanic force, it could appear that Amazon has an unassailable advantage. However, these brave workers standing up for their rights and displaying collective determination will inspire the movements of tomorrow. Amazon’s burgeoning labor vanguard serves as an example to workers around the world.