The following are excerpts from an interview with Stalin Pérez Borges, a union leader and veteran socialist militant in Venezuela. He is a member of the Unitarian Unionist Chavista League (LUCHAS) and of the Bolivarian Socialist Workers’ Central (CBST) Advisory Council. The original appeared in Spanish on Feb. 7 — that is, long before the Feb. 23 showdown on the border. Translated by Pedro Alvarez from Aporrea. (Entire interview: tinyurl.com/y4tknu43) 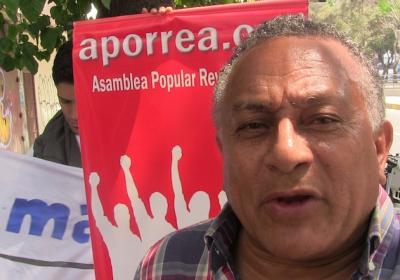 Social and economic crisis in Venezuela

The economic and social crisis has grown exponentially for five years, and has gotten to this rotten state of hyper-inflation that we’re barely coping with. This is the cause for the huge discontent that we have at this stage and for the important change in the correlation of political power in this juncture. This is a consequence of three fundamental facts: two of them circumstantial, and one structural.

The circumstantial causes are: First, the economic sabotage and blockade, described by the government as “economic warfare.” This factor is the main determinant in the current economic and social situation. The trade exclusion and the blockade have caused a stagnation of 80 percent of what little was being produced in the country’s industries.

It has also led to plummeting in the high levels of imports of food, medicines, raw materials and machinery. It is also the cause of the hoarding and the fact that unscrupulous traders can set the price for all sorts of commodities, including the U.S. dollar.

The second circumstantial cause is corruption, ineptitude and impunity, which have soared in the past five years. The level of corruption and ineptitude [by] government functionaries is major and damaging. In many cases it coincides with the sabotage by the elites and imperialists, with the complicity of military and civilian functionaries, regarding the speculative value of the market price of commodities that the people need.

The structural problem is that the national productive capacity is very low. This is also determined by the historic high level of oil income, which turned the local bourgeoisie into a very parasitic social class, always dependent on the price of oil. They prefer to import, rather than produce or export.

Under Chávez, despite some appropriate programs and plans to improve the development of national industry, this largely remained on paper.  The levels of national production needed were never made a reality. Under Chávez, from 2007 to 2012, that low production capacity didn’t produce discontent as the high price of oil was enough to import even luxury goods.

But from 2013 to date, with Maduro, a high price has been paid for this mistake. With the decreasing price of oil, there is no money for imports, nor for the national industry, including transnational companies, to receive the dollars that they used to be guaranteed due to the currency controls. The struggle of these sectors to seize a share of that income is the main reason why the conspiracies and the fight to the death haven’t stopped in 20 years of Chavista governments. And it is here, making use of this situation, that Yankee and European interests also play a role.

Scope and class character of the Jan. 23 ‘opposition’

The opposition’s demonstrations on Jan. 23 were impressively big. Those in Caracas and Valencia surprised both them and others. That has encouraged the opposition. The right-wing segments had largely surrendered after the elections for the congress (ANC).

Since the election, until Jan. 23, they were absent at street demonstrations. They were focused on media campaigns against the government, taking advantage of the growing discontent because the government hasn’t been able to provide measures to successfully counter the “economic warfare.”  And, they focused on the complicity of corrupt bureaucrats who have allowed speculation in the commercial sector.

As solutions, President Maduro has implemented distribution of food packages, carried out by the Local Committees of Distribution and Production (CLAP), and also Compensation Bonuses and continuous increases to the minimum wage and food ticket for workers. These are progressive measures, but they have not been enough to cover the loss of purchasing power of workers’ salaries.

So the right-wing demonstrations of Jan. 23 included the usual social base of middle-class people, plus some segments of workers, including some unions that earlier this year identified with Chavismo.

After Jan. 23, the opposition made big efforts to turn out the same number of people, or more, as on that day in Caracas and Valencia. They demonstrated again on Feb. 2, but it wasn’t the same in numbers or expectations as on Jan. 23. Meanwhile the Chavista demonstration on Jan. 23 in Caracas was very well attended.

The feeling among the government-sympathizing popular class is very strong. On January 28, 29, 30, 31 and Feb. 1 and 2, Chavistas organized surprisingly spectacular demonstrations in more than six cities. The Feb. 2 demonstration in Caracas was attended by large numbers of people, similar to those during the best days of Chavismo. So currently we have a Chavismo that is more motivated to take the offensive against the coup or invasion plans.

There are no visible signs of grassroots self-organizing. The United Socialist Party of Venezuela (PSUV) and government structures are leading these demonstrations. The strong presence of youth is striking.

Internal rupture within the army?

Since before Jan. 10, the opposition and high-ranking members of the Trump administration, U.S. senators and some governments, like those of Ivan Duque in Colombia, Jair Bolsonaro in Brazil, Mauricio Macri in Argentina, and Luis Almagro from the Organization of American States (OAS), have been waiting for the push for Maduro’s fall to come from segments of the Bolivarian National Army Forces (FANB).

However, until now that has failed. They have offered FANB members large sums of money and promises of amnesty and appointment to high positions. Ever since Guaidó proclaimed himself interim president, this usurper’s main proposition is aimed at members of the army, promoting a supposed Amnesty Law in favor of soldiers who rebel against Maduro’s government.

No signs have been seen inside or outside the FANB that a force may appear which is capable of risking a suicidal venture on the side of imperialism and its lackeys in the opposition.

Imperialism’s aim has always been to oust the Chavista government at any cost. Since the moment Maduro came to power in 2013, they started the plan to oust him. Currently, they are acting with more urgency. They need to put an end to Maduro and the Bolivarian revolution, the cycle of instability and the progressive and more-or-less sovereign governments that arose in our continent after Chávez kicked off the revolutionary process and started governing.

With Lenin Moreno’s treason in Ecuador and having regained complete control in Brazil and Argentina, and with a favorable balance of forces in the region, imperialism does the rest. They want to oust Maduro and defeat the Bolivarian process with the least possible political cost.  But if they don’t achieve this in the short term, they will try to do it at any cost. Trump represents a segment of imperialism that desperately wants the U.S. to seize global economic, political and military hegemony. They want to recover economic, financial and industrial supremacy, which they have been losing to China. Their power is mainly military.

The anti-imperialist sentiment of our people is historic and it runs very deep. It will be difficult to defeat us. It will be hard to convince a majority of the workers and poor people to accept the raising of the U.S. flag, as Guaidó and the right-wing political leaders who are with him have done in their public demonstrations.

Since the oil strike of 1936 — which almost became a national strike against the British and Yankees and the military dictatorship — a very deep anti-imperialist sentiment has grown.  It was rebuilt or revived for more than 15 years with Chávez’s message. A rebellious sentiment appeared here that hasn’t stopped since Feb. 27 and 28, 1989 [dates of the mass uprising in Caracas called the Caracazo].

This found expression in the decisive, fearless struggle of April 13, 2002, when an attempted military coup against Chávez was defeated.  And it was demonstrated in the response to the bosses’ strike and oil sabotage from December 2002 to January 2003 — and in all the resistance we have carried out, not letting the right wing oust Maduro by force.

The government continues to pay on the foreign debt in the middle of this imperialist economic blockade. It hasn’t touched any monopolies, such as the Polar group and others, when these same monopolies hoard food stocks or distribute them arbitrarily and overpriced!

Living in Valencia, the country’s main industrial city, and being a unionist, I can say that its industrial zones are almost paralyzed, that there are stagnant or nearly stagnant industrial sectors, that working conditions, safety and salaries in important sectors, such as energy, oil, health and education have suffered to worrisome levels.

In a public statement by LUCHAS, we urgently requested the dispatch of army officials and soldiers to at least 11,000 zones, so that they can live with the communities and organize the military aspect of anti-imperialist resistance. We need to make the civilian-military alliance a reality in the community. In that statement we said: “In this context, we encourage the people and workers to voluntarily join the ‘50,000 Popular Defense Units in all neighborhoods, cities and corners of the country, for them to back up and strengthen an integral defense of the motherland,’ which President Maduro has asked to implement.”

Popular militias or those Popular Defense Units are a work in process. The Venezuelan National Militia has existed for years. There are already 2 million militia members, many of whom are being called on to integrate other army forces as active, permanent soldiers. It’s said that the weapons capacity of the army is very modern, and the army has good logistics and respectable professionalism.

We also call for the formation of “Simón Bolívar International Brigades” of solidarity with Venezuela. And we call for: 1) the World Federation of Trade Unions (WFTU), national unions, federations and other social movements and organizations around the world to trade in medicines, food and raw materials with the legitimate government of President Maduro and/or with union and social organizations of Venezuela; and 2) the social organizations of Latin America to organize Solidarity Caravans, and come here through our borders with Colombia and Brazil.

If [the government]  doesn’t act soon, resolving the consequences of its stagnation in these economic and social aspects, it will do more damage than any missile or incoming imperialist “humanitarian aid.” If it doesn’t control problems effectively and for the long term — such as currency exchange speculation, supply shortages, and the price of food and medicines — or encourage the national production of goods and services — in mid-term it will lose its social base and  find it difficult to survive.

Among other measures, it has to stop paying the foreign debt, block capital flight, impose progressive taxation on assets, and promote the distribution and control of goods by a communal state run by the workers. Otherwise we will fail.

Let me finish this interview with our motto: “Fight, fight, don’t stop fighting for a government of the workers and of the people.”