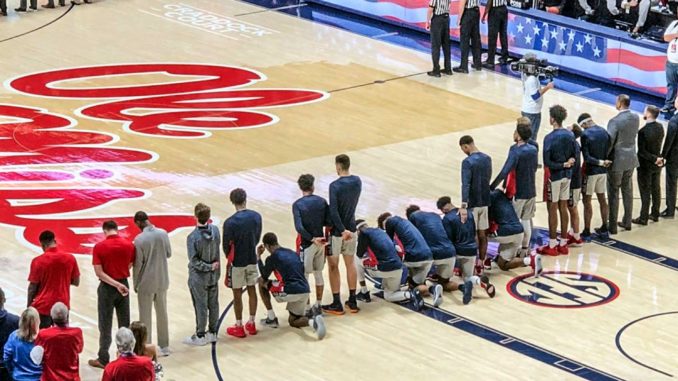 As the national anthem was being played on Feb. 23  in Oxford, Miss., before an Ole Miss at-home men’s college basketball game with Georgia, one-by-one seven African American players, and one Latinx player, got down on one knee, with their heads bowed until the last note was played.

Carrying forth the protest of taking a knee begun by former National Football League quarterback Colin Kaepernick in 2016, these heroic players were protesting the presence of a white supremacist march taking place on  campus on the same day as the game. Taking a knee is meant to call national attention against police brutality and all forms of racist oppression.

Ole Miss has a sordid tradition of promoting pro-slavery, pro-Confederacy symbols and history since the university was founded in 1844. It wasn’t until 1997 that Confederate flags were banned at Ole Miss football games, 25 years after the first Black players were recruited. The mascot, “Colonel Reb,” was scrapped in 2003. Confederate symbols, like the emblem on the Mississippi state flag and the Confederate/Civil War battle anthem “Dixie,” wouldn’t be phased out until some 10 years later. An on-campus Confederate monument and buildings named for pro-confederate people remain, but it’s just a matter of time until these symbols see their final days.

Ole Miss Coach Kermit Davis, in defense of his players, told ESPN, “Our players made an emotional decision to show these people they’re not welcome on our campus, and we respect our players’ freedom and ability to choose that.”