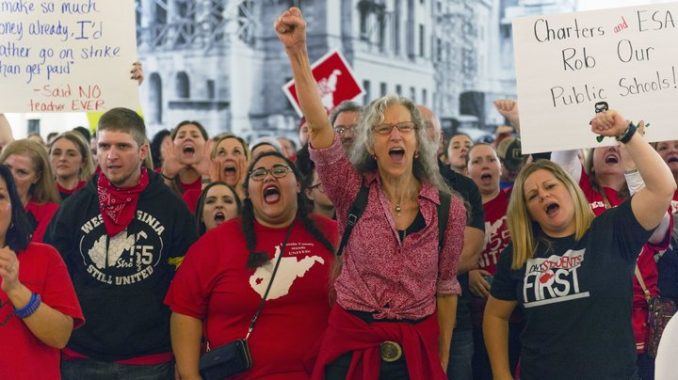 W.Va. education workers take their rank-and-file anger against privatization to the Statehouse.

Within hours on Feb. 19, the educators had won a dramatic victory, forcing the West Virginia House to vote down a reactionary privatization bill 53-45. On Feb. 20, leaders in the three West Virginia unions announced that, for the moment, strike action was suspended, and the unions reserve their right to go out again at any time if the reactionary legislative attack resumes.

The walkout was in response to an anti-union “omnibus bill,” SB 451, introduced in the state Legislature as retaliation for last-year’s nine-day action.

In the recent bill, the ultra-rightist state Senate brought back most of the original, rotten proposals defeated by the 2018 walkout. Prior to the Feb. 19 walkout, the House of Delegates spent a week debating and making amendments to the bill.

In a true “carrot-and-stick” manner, SB 451 was originally written to link a 5 percent pay raise and health insurance funding for teachers with reactionary legislation about charter schools, vouchers, the elimination of seniority rights and the eradication of union dues deduction through payroll.

One section of the bill would have placed a cop in every school. While union officials did not take a concrete position on that, the left-leaning rank-and-file union members of the WV United Caucus raised principled opposition, which sparked intense debate on social media.

Caucus members brought up issues such as the “school-to-prison” pipeline prevalent throughout North America, along with the criminalization of a whole generation of students. School policing is especially a concern for nationally oppressed students of color in the mostly white, rural areas of the state, and for LGBTQ students who live in fear of racist, homophobic and transphobic police violence.

Because of pressure from the educators, the House removed the bill’s sections on vouchers and union-dues deduction during the week’s debate. The number of charter schools the state could open was limited to two “pilot” operations. The language on seniority was slightly altered.

But when some union leaders announced they would support the House changes, rank-and-file members of all three unions immediately went to social media and made it clear to the union higher-ups that the rank and file would not compromise to allow any charter schools.

Then, on Jan. 18, reactionary senators — many of whom are funded by the right-wing Koch brothers and their American Legislative Exchange Committee (ALEC) — defiantly reintroduced vouchers and increased the charter school limit from two to seven. The bill was set to go back to the House, which like the Senate, is majority Republican.

The walkout was announced that evening by officials of the three education workers unions.

During the 2018 walkout, county superintendents had closed schools and no one who walked a picket-line was docked pay. That cooperation and leniency are even more significant in this “right-to-work” (for less) state where collective bargaining is prohibited and labor actions are illegal.

This year, all but one of the 55 counties closed after the walkout announcement.  On the day of the work action, only the superintendent of education in Putnam County schools refused to close them, and the administration had a difficult time getting staff to report.

Picket lines were set up at every school on Feb. 19. Bus operators did not show up, but a handful of scab mechanics did. The Putnam County superintendent ordered the mechanics to operate the buses, but the few mechanics who shamefully crossed the picket line were not experienced drivers and could not fulfill that task.

Teachers and support staff from surrounding counties stood with employees on the Putnam County picket lines, starting with the bus garages at 5 a.m. Many students also joined the picketers, rather than break solidarity by going into the classrooms.

In Ohio County, anti-union and pro-corporate Board of Education members called an emergency meeting, intent on filing an injunction to force strikers back inside the schools.

Once again, school workers from other counties, as well as labor unionists from Wheeling, W.Va., eastern Ohio and western Pennsylvania, came to provide solidarity.

Wearing mostly red, people held signs all around the outside of the Board office and filled the meeting to maximum capacity. Just as the union-busting Board members were in a private executive session, preparing to seek an injunction, the House voted 53-45 against the bill.

People inside and outside the meeting started chanting, “Vote them out!” as embarrassed Board members walked out of the conference room in shame.

Rank-and-file militancy in all 55 counties

From the very beginning of the current struggle, union officials admitted to members that they had made a mistake in 2018 by prematurely calling off that walkout. At the time the rank and file exerted leadership and led a wildcat strike until the governor signed a pay raise bill and confirmed that the nasty, anti-worker proposals were defeated.

School workers continue to have little trust in the Legislature and have told union leaders they were not going back this year until there is a guarantee that House members will not reverse their “no” to the reactionary SB 451 bill.

The billionaire coal-baron governor, Jim Justice, held a press conference the afternoon of the walkout, “promising” a “clean bill” that featured only a pay raise and insurance funding. He also urged school workers to go back to work.

Union officials, including American Federation of Teachers national President Randi Weingarten, held a press conference at the end of the walkout’s first day. They emphasized the members’ lack of trust in state politicians. In defiance of the governor’s request, these leaders declared there would be another walkout the next day to ensure there is no take-back by the House.

State Superintendent of Schools Steve Paine sent a message to county superintendents, ordering them to open schools, despite the unions’ announcement.

Once again, all counties were closed except Putnam County. To the dismay of the backward legislators and a handful of cowardly Board of Education members, the threats of injunctions, disciplinary action and state intervention could not stop the school workers from being “55 United.”

After teachers and support staff in West Virginia completed their work stoppage in 2018, education workers in many other states, such as Oklahoma, Kentucky and Arizona, walked out as well.

Recently, educators in Los Angeles and Denver carried out victorious strikes. Despite differences in geography and conditions, the struggle is the same. Education workers are vehemently against for-profit charter schools and for smaller class sizes, better pay and affordable health coverage.

ALEC, started by a racist segregationist named Paul Weyrich, and other organizations funded by the Koch brothers, such as “Americans for Prosperity,” are responsible for legislative bills aimed at privatizing public education. These bills weaken unions under the false guise of “school choice.” In Oklahoma, an ALEC bill is presently being considered as a way to revoke certifications of teachers who participate in any future walkouts.

In his recent State of the Union address, Trump advanced the misleading phrase “school choice.” In the same speech, he also vowed that the U.S. “would never become a socialist country.” Trump continues to try to build a xenophobic, racist “border” wall by undemocratic means and also to  destabilize and overturn the democratically elected revolutionary government of President Nicolás Maduro in Venezuela.

One of the creators of SB 451, Senate Education Committee Chair Patricia Rucker, has written several editorials red baiting union leaders. Rucker, who is of Venezuelan descent, travels there regularly and openly supports the violent, anti-democratic opposition in that country.

Another vocal supporter of the original SB 451, Eric Porterfield, made national news recently for spewing hate against the LGBTQ community on the House floor. Porterfield, a backwater Christian preacher, despises unions and, like Rucker, wants to replace public schools with “faith-based” education.

The same ultra-right forces that have been threatened by socialism for well over a century are the very same ones now trying to break public sector unions and turn public services into profit-driven industries.

Education and public sector workers all around the globe have the same class enemy, which is also shared with President Maduro, a staunch union member and a bus driver by trade!

No class war on education workers! No U.S. war on Venezuela!