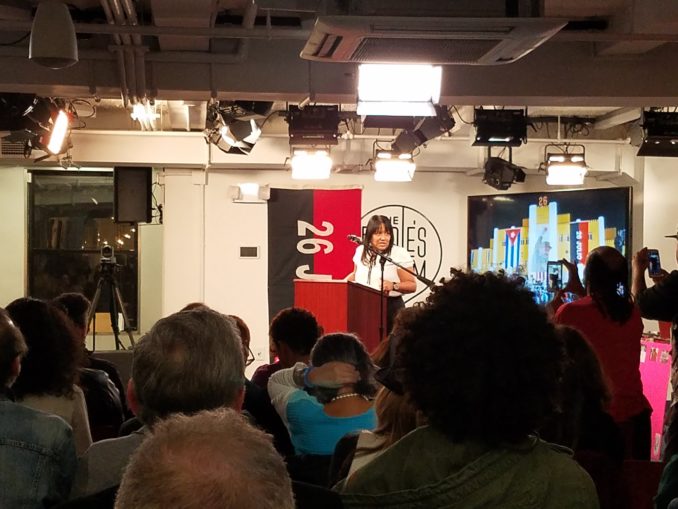 Cuba’s ambassador to the U.N., Anayansi Rodriguez Camejo, speaks in New York City at the celebration of the 60th anniversary of her country’s revolution.

A crowd packed the People’s Forum in midtown Manhattan Feb. 8 to celebrate the 60th anniversary of the Cuban Revolution and to honor outgoing Cuban ambassador to the U.N., Anayansi Rodriguez Camejo.

The featured speaker for the evening, Ambassador Rodriguez has spent the past two years defending Cuban sovereignty at the U.N. against the aggression of U.S. imperialism. She will now return to Cuba to assume the post of Deputy Foreign Minister.

Ambassador Rodriguez spoke about the example of Fidel Castro’s “permanent revolutionary intransigence and faith in victory.” She raised the importance of solidarity not only with Cuba, but with Venezuela, Puerto Rico and Palestine. She ended her remarks: “Long live our socialist and democratic revolution. Of the humble, by the humble and for the humble! Socialismo o muerte! Venceremos! Patria o muerte! Venceremos!”

Following the Ambassador’s remarks, event organizers paid tribute to recently deceased Black Revolutionary Nehanda Abiodun. Born in Harlem and active in Black Liberation struggles in 1970s and 1980s, Abiodun lived in Havana for over 30 years. She sought political asylum in Cuba after being pursued by the FBI for alleged involvement in freeing Assata Shakur from prison and other revolutionary activity. An organizer with the Malcolm X Grassroots Movement, Abiodun was known as the “Godmother” of Cuban hip-hop.

The event also featured speakers from three upcoming brigades to Cuba, which will provide opportunities for people from the U.S. to travel to Cuba and witness the Cuban Revolution for themselves.

The 24th International May Day brigade will travel to Cuba from April 23 to May 5. More information is at nnoc.info/mayday-brigade-call.

The IFCO/Pastors for Peace caravan will travel to Cuba in June. More information can be found at ifconews.org.

The 50th Annual Venceremos Brigade will travel to Cuba on July 21 and return in separate groups on Aug. 2, 6 and 13, providing brigadistas with options to choose trips of different lengths. See more information at vb4cuba.com.