The process of Britain leaving the European Union, called Brexit, is producing a major spasm in world capitalism’s current crisis.

What is yet to be decided is how Britain will leave. The choices are either “soft,” which would involve maintaining some formal links, or “hard,” with rigorous checks of people and goods at all border crossings and no agreement as yet on custom duties. This may have the biggest impact on the Republic of Ireland. 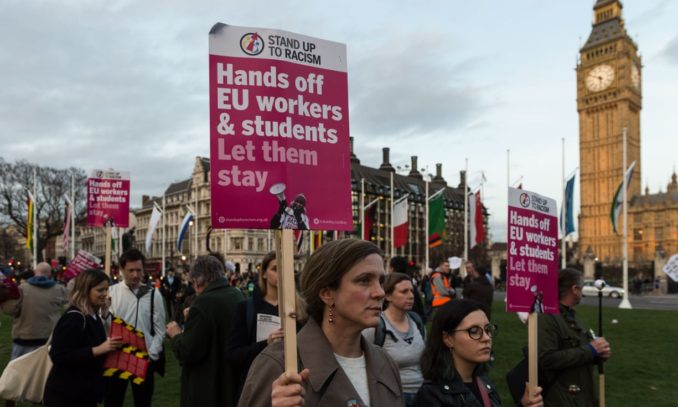 A 2018 protest outside Parliament in London to protect rights of EU workers post-Brexit.

The European Union is a free trade zone. That means that goods can go from one member state to another without tariffs. It is also a single market. This allows both the free flow of capital and “the free flow of labor” for its members.

An unelected bureaucracy based in Brussels makes economic decisions that affect the entire EU. This bureaucracy serves European finance capital, especially the banks based in Germany, France and Britain.

EU rules can impose wage austerity and budget cuts, dismantle social protections and insist on deregulation — without input from the people these changes would seriously affect. This has been most obvious with its treatment of Greece over the last five years.

The British ruling class doesn’t need the EU bureaucracy to impose its own austerity rules on the workers inside its territory. These have reduced the standard of living for large sectors of the working class in Britain.

On the other hand, sectors of the British ruling class undoubtedly resent Germany’s dominance of the EU. But with Brexit, British capitalists will face a disruption of trade and capital flows after 40 years of integration in the EU.

It is in the interest of the European bourgeoisie to maintain the EU as a common market for two main purposes: so it can compete more effectively with U.S. imperialism and with China, and so it can increase the exploitation of European workers.

Thus, the EU bureaucracy has reason to make Britain pay for disrupting and weakening the EU, and to discourage exits by other countries.

All the major political parties in the British Parliament appear to have three factions contending inside them: “the hard leavers,” “the soft leavers” and “the remainers.” These contending factions have prevented the current Tory government from arriving at a position with majority support.

In addition, the government in London rules England, Scotland, Wales and the northeast of Ireland. Scotland voted by 62 percent to remain in the EU.  In Ireland’s northern six counties, the vote to remain was 56 percent.

The overall vote in the 2016 referendum was just 52 percent for leaving. Right-wing politicians like Boris Johnson waged a xenophobic and racist campaign against all immigrants — as well as blaming the EU for the decline in living standards of British workers — which led to the Brexit vote.

There has been some talk about a second referendum, but this seems unlikely. Prime Minister Theresa May has repeatedly said she will have a plan by the March 29 deadline and Britain will indeed leave.

A hard exit will create a big problem for the Republic of Ireland, which remains in the EU. Ireland has a land border with the six counties. Since the Belfast Agreement of 1998, goods and people have flowed across the border unimpeded.

But the Irish border, which has existed only since the Republic of Ireland won its freedom in 1922, has 208 official road crossings along 310 miles.

Economists estimate the Irish economy will contract by 5 to 10 percent.  Markets will be lost. Farmers will have trouble selling their products on the other side of the border. Workers in the Irish fishing industry may have to pay duty on fish caught in British waters. Workers who live in the Republic but work in the six counties, or vice versa, may have to move or lose their jobs.

If a hard border is put in place, with soldiers, customs officers and identification checks, not only would it anger millions of Irish people who vehemently oppose British occupation. It could have other repercussions, such as the harassment and possible detention of immigrants and refugees at checkpoints. And it could pose obstacles to women traveling from the north — where abortion is outlawed — to the Irish Republic to obtain the procedure legally.

Britain’s economy is far more threatened by the consequences of Brexit than that in any other EU country. If May can’t get a deal with the EU, projections show that the British gross domestic product would fall by 9.3 percent and housing prices by 30 percent. (New York Times, Feb. 7)

Some of the 3 million workers in England with passports from other EU member countries — especially the most skilled in health care and construction — have been leaving. Though the regulations are yet to be set, most non-British EU citizens working in England expect hassles. Since the Brexit vote, wages in the hospitality, restaurant, construction and finance sectors of the English economy where foreign workers were frequently hired — have been increasing for new hires.

Prime Minister May has promised that any worker currently in England will be allowed to stay. However, members of the “hard leavers” faction in the Conservative Party have challenged her on this point. A report in the Sept. 19 Guardian claimed that 7 out of 10 non-British EU workers would lose their right to work in Britain after Brexit.

Trade disruptions will have negative consequences in the various European countries that are major partners of Great Britain. A drop in remittances from workers who must leave Britain will harm the economies especially of the eastern European countries which have had many citizens working there.

For example, the million Polish workers in Britain sent home over $1 billion in 2017. Eight percent of Lithuania’s workers live in England. Workers even from France and Germany sent home a bit more than Polish workers.

It is unclear what will happen to the approximately 1 million British workers in continental Europe.