Feb. 10 — For two-and-a-half weeks, Venezuela has seen almost daily demonstrations in which millions of people across the country have reaffirmed their support for the government of Nicolás Maduro. The Venezuelan masses have given a clear message: The Bolivarian Revolution is alive and well, and won’t surrender to a U.S. coup.

On Jan. 23 opposition figure Juan Guaidó, head of the National Assembly — that is operating in contempt of the highest court — proclaimed himself president of the Bolivarian Republic of Venezuela. His proposed changes for the country are a complete capitulation to U.S. imperialism: privatization of natural resources, neoliberal austerity and generous concessions to foreign capital.

The Trump administration announced that it will send “humanitarian aid.” A day later, Guaidó invited the U.S. shipment into Venezuela, stating that aid would enter through Colombia, Brazil and a Caribbean island. Venezuela’s legitimate government — the only real government — has repeatedly said it will not allow the U.S. to enter its national territory. 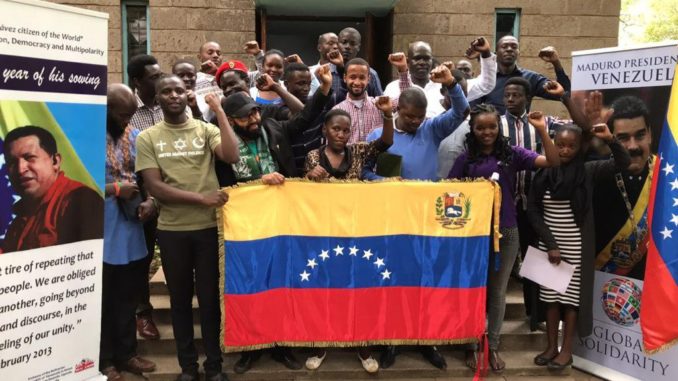 Guaidó’s virtual coup government has failed to mobilize more than a few thousand supporters, who are in mostly wealthy neighborhoods. Instead, Guaidó has called on the military to rebel and on the U.S. to invade Venezuela to put his “government” in power. So far, except for a few individuals, the Bolivarian Armed Forces has declared its loyalty to the real government. This is true even though the U.S. has tightened sanctions on individual generals.

In response to the threat of invasion, the Bolivarian government has begun arming the country’s community militias.

The main pretext that the Trump gang has presented for backing (and in truth directing) the coup government is its claim that there is a humanitarian crisis in Venezuela, which it blames on the government. The most recent threats of military invasion have been justified by the delivery of “humanitarian aid.”

The real cause of economic problems is due to the machinations of U.S. imperialism and its cronies.

The collapse of oil prices in 2014, due to a Saudi Arabian decision to flood the global market, had a huge impact on the Venezuelan economy. Oil has been the main national industry since it was discovered in the country, and Venezuela currently sits on the largest certified reserves of crude oil.

In addition to the drop in oil revenues, in 2015 U.S. President Barack Obama enacted economic sanctions on Venezuela, which Trump has since increased. These sanctions cost the Venezuelan economy billions of dollars every year and make it difficult to import certain products, particularly medicines.

Due to the sanctions, currency manipulation and deliberate withholding of imported goods by opposition business owners, Venezuela has been under attack for years as Washington and the Venezuelan oligarchy wage war on its economy.

The Trump gang’s claims of humanitarian crisis deliberately ignore the social programs that the Bolivarian government has maintained throughout the economic attacks. For example, there are more than 32,000 Local Production and Supply Committees (CLAP in Spanish), which provide such staple foods as rice, lentils, beans, oil, tuna, corn flour, sugar and milk. These foods are sold at subsidized prices, and 11,000 of the CLAPs have begun providing various hygienic products.

Besides the CLAPs and various agricultural projects, the Bolivarian process over the past 20 years has eradicated illiteracy, opened hundreds of universities and built 2.5 million subsidized homes since 2011. Real hardships exist, but it is precisely the Bolivarian government’s actions that have prevented a humanitarian crisis.

For an example of a real humanitarian crisis, consider that this Feb. 27 will be the 30th anniversary of the “Caracazo,” the mass uprising in Caracas sparked by the lack of food and the announcement of neoliberal reforms. It was a real coup that protested government repression of the masses at that time. And it is what launched military officer Hugo Chávez as a political leader and began the political struggle now being carried out by the Bolivarian Revolution.

Global solidarity with the Bolivarian Revolution

In the weeks since the start of the U.S.-orchestrated coup, there have been hundreds of demonstrations across the world in solidarity with the Bolivarian Revolution. Almost immediately after Guaidó’s self-inauguration, protesters converged on the White House demanding that Washington stop interfering in the country.

Within days, cities such as New York, Miami, Philadelphia, Boston, Houston, San Francisco, Denver, Seattle and Vancouver held emergency demonstrations. A steady flow of solidarity demonstrations have been held throughout the United States and in other parts of the world, with actions planned in cities for Feb. 23 and marches in Washington, D.C., on March 16 and 30.

Demonstrations have also been held in Europe, particularly in Spanish cities such as Madrid. On Feb. 10, some Yellow Vest protesters in France carried Venezuelan flags or expressed solidarity with Venezuela at the embassy in Paris. Global rallies have ranged from from Denmark to Iran to India. (tinyurl.com/y4k88f82)

The governments of Russia, China, Cuba, Bolivia, Mexico, Nicaragua, South Africa, India, Italy, New Zealand and most African governments have all continued to recognize Maduro as president. Furthermore, both the U.N. Security Council and the Organization of American States refused to recognize the coup government, despite the U.S. and its allies raising resolutions before them.